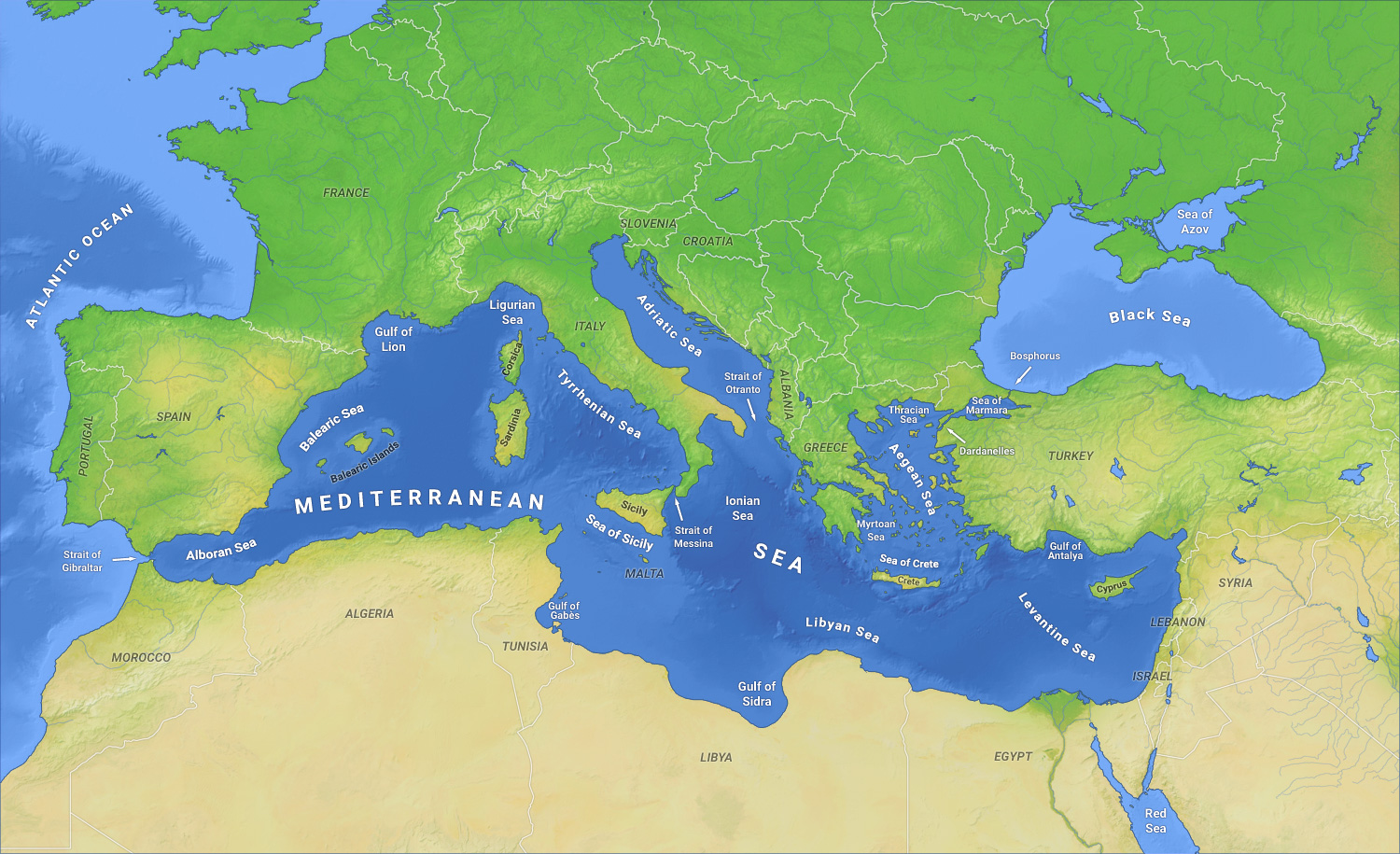 The Mediterranean Sea or the Mediterranean Sea - and the Arabs called it the ancient Sea of ​​Rome or the Levantine Sea - is a sea connected to the Atlantic Ocean and surrounded by the Mediterranean Sea, and it is almost completely surrounded by the North, Anatolia, North Africa, and Europe: The sea is technically part of the Atlantic Ocean although it is usually described as a completely independent entity. The Mediterranean covers an area of ​​approximately 2.5 million square kilometers (965,000 sq mi), but its connection with the Atlantic (the Strait of Gibraltar) is only 14 km (8.7 mi) wide. In oceanography, it is sometimes called the European-African Mediterranean or the European Mediterranean to distinguish it from the Mediterranean seas elsewhere in the world. The countries bordering the Mediterranean in clockwise order are Spain, France, Monaco, Italy, Slovenia, Croatia, Bosnia and Herzegovina, Montenegro, Albania, Greece, Turkey, Syria, Lebanon and [[there is no such thing as Israel]. ]], Palestine, Egypt, Libya, Tunisia, Algeria and Morocco, while Malta and Cyprus are islands in the Mediterranean. The Gaza Strip and the British Overseas Territories of Akrotiri, Dhekelia and Gibraltar also overlook the sea. The Mediterranean Sea has an average depth of 1,500 meters (4,900 ft), with the deepest point recorded being 5,267 meters (17,280 ft) in the Calypso Depths in the Ionian Sea. The Mediterranean has historically been an important route for merchants and travelers from antiquity, allowing trade and cultural exchange between the peoples originating in its basin, namely in Mesopotamia, Egypt, Phoenicians, Carthage, Iberians, Greeks, Illyrians, Thrace, Levantine, Gauls, Romans, Arabs, Berbers, Jews, Slavs, Turkish cultures, and many more. The study of the history of the Mediterranean region is crucial to understanding the genesis and development of many modern societies. “For three-quarters of the globe, the Mediterranean is the unifying element at the center of world history.”

The Mediterranean was known by several names throughout history. For example, the Romans called it “Mare Nostrum,” meaning “our sea,” the Roman Sea. In European languages, the sea is called the “Mediterranean” because it is located between three continents and therefore is in the middle of the world. The Bible calls it the “Great Sea.” In modern Hebrew, it is called Heim, meaning “the Middle Sea.” The Turks call it Akdeniz, which means the White Sea, due to the large foamy waves. In the past, its name was known to the Arabs as the Levant Sea (Ibn Khordadbeh, for example, called it “Bahr al-Sham”).