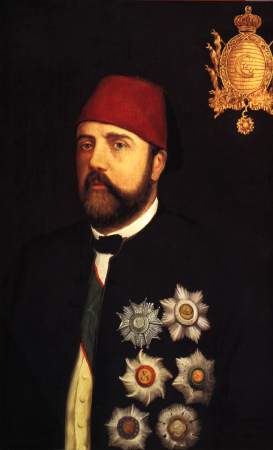 Khedive Ismail (1245 AH / December 31, 1830 - 1312 AH / March 2, 1895), the fifth ruler of Egypt from the Alawite dynasty, from January 18, 1863 until he was deposed by the Ottoman Sultan under pressure from England and France on June 26, 1879. During his reign He worked on developing the urban, economic and administrative features in Egypt significantly to deserve the title of the second founder of modern Egypt after the achievements of his grandfather, Muhammad Ali Pasha the Great.

His birth and upbringing

He is Ismail bin Ibrahim Pasha bin Muhammad Ali Pasha. He was born on December 31, 1830 AD in the Palace of the Traveler Khana in Jamaliya. He is the middle son of three half-brothers of Ibrahim Pasha, the two princes Ahmed Refaat and Mustafa Fadel. His father Ibrahim Pasha took care of his education, so he learned the principles of science, Arabic, Turkish and Persian languages, in addition to a little mathematics and nature. His father, at the age of fourteen, sent him to Vienna, the capital of Austria, to be treated for conjunctivitis, and also to complete his education, and he stayed in Vienna for a period Two years, then joined the Fifth Egyptian Mission to Paris to join its students, among whom were Prince Ahmed Refaat (his brother) and Princes Abdel Halim and Hussein, two of the sons of Muhammad Ali. In Paris he studied engineering, mathematics and nature. He also mastered the French language, speaking and writing, and was greatly influenced by French culture and architecture. Then he returned to Egypt during the reign of his father Ibrahim Pasha, and when Ibrahim died, he was succeeded by Abbas Hilmi I, and Prince Ismail hated his cousin Abbas (Abbas’s father is Prince Ahmed Toson, uncle of Ismail), and when he took power, Ismail and his brothers felt Abbas’s hatred for them. Then his grandfather Muhammad Ali died, and the dispute intensified between Ismail and the rest of the princes regarding the division of his grandfather’s inheritance, and Ismail and some of the princes traveled to Astana, and Sultan Abdul Majeed I appointed him as a member of the Ottoman Empire’s ruling council, and blessed him with Bshawiya, and he did not return to Egypt until after the killing of his cousin Abbas, and after him his uncle Muhammad Saeed took over the state of Egypt. When Ismail returned from Astana, he received great sympathy from his uncle Saeed, and entrusted him with heading the (Council of Judgments), which was the largest judicial body in the country at that time, and Saeed Pasha sent him in 1855 on a political mission to Emperor Napoleon III regarding Said Pasha’s desire from European countries to Expanding the scope of Egypt’s independence after its participation with the allies in the Crimean War. Ismail performed that task with his intelligence and tact. Napoleon III promised him to support his proposal at the Peace Conference in Paris, but he did not fulfill his promise, and he also met Pope Pius IX. Then Said Pasha sent him in an army of 14,000 to Sudan and returned after he succeeded in calming the situation here