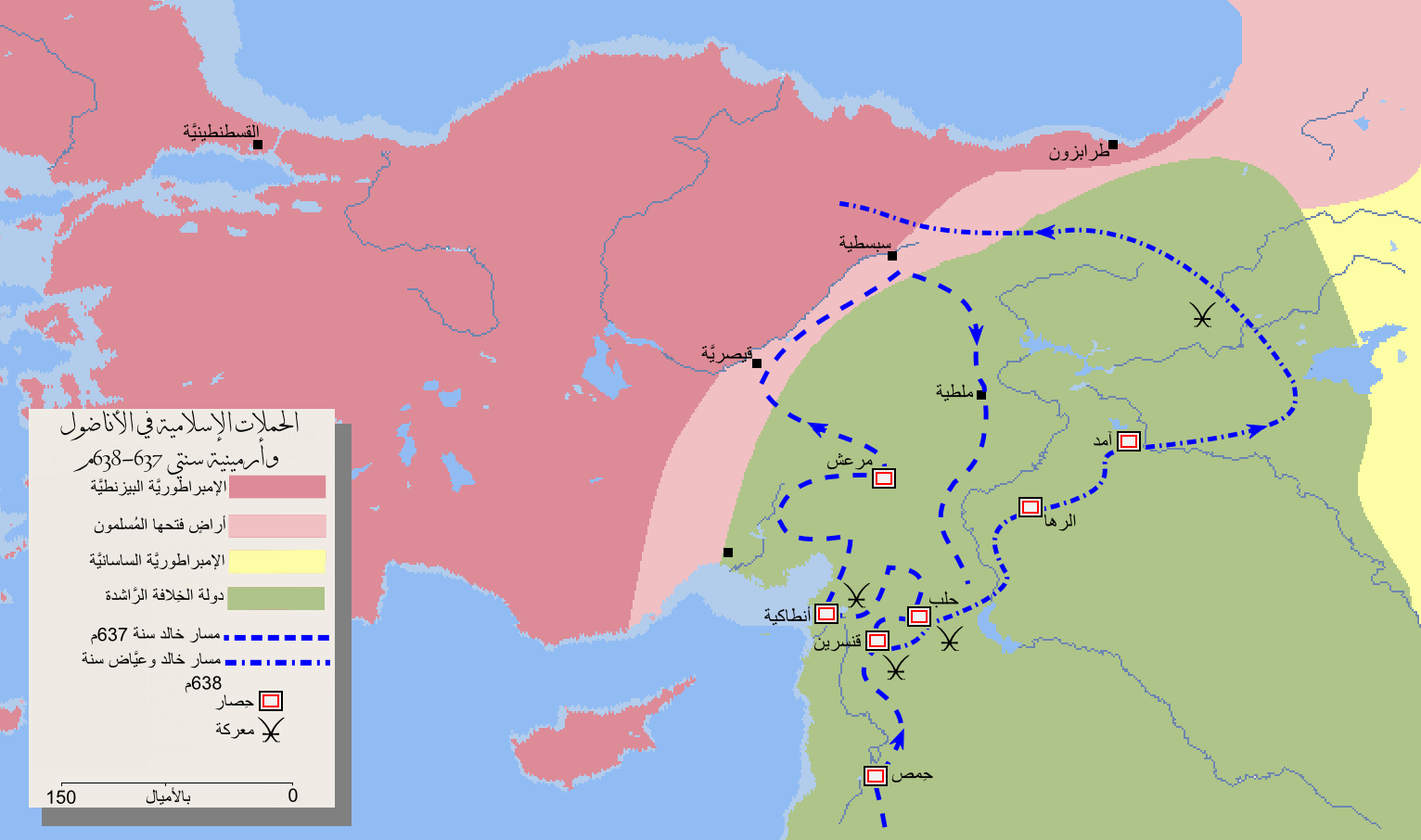 Islamic conquest of Armenian or Islamic invasion of Armenian (Armenian: հայաստանի իսլամական իսլամական) and in some sources with national dye, especially known as the Arab Fath of Armenian (Armenian: արաբական արշավանքները արշավանքները), is a series of military campaigns by Muslims to open Armenian, the region It consisted of eastern Anatolia and the Caucasus under the banner of the Rightly-Guided Caliphate State first, then under the banner of the Umayyad Caliphate after the matter was transferred to the Umayyad Caliphate. The first attempts to conquer Armenia took place during the reign of Caliph Omar Ibn Al-Khattab when he sent an army led by Ayyad bin Ghannam Al-Fihri in the year 18 AH corresponding to the year 640 AD, to complete the conquest of the Euphrates island. Orzen, Badlis, and mixtures. Then a section of the campaign headed to Galatia without succeeding in conquering it, while Iyad sent Othman bin Abi Al-Aas Al-Thaqafi at the head of the other section, so he opened an additional section of Byzantine Armenian and the favor of the Armenians on tribute, one dinar for each house. In the year 21 AH corresponding to the year 642 AD, another campaign headed to the city of Bab al-Abwab at the head of four armies led by Suraqah bin Amr, and this campaign was able to reconcile with the governor of the city on the tribute. The Muslims returned to conquer the rest of the Armenian lands during the caliphate of Othman bin Affan, so the latter wrote to Muawiyah bin Abi Sufyan, who was his governor over the Levant and the Euphrates island and its frontiers, ordering him to direct Habib bin Maslama Al-Fihri to complete the Armenian conquest of her beloved, and to proceed to the conquest of Armenia. So he rose to it in six thousand and it was said among the eight thousand of the people of the Levant and the Euphrates island, and he besieged the city of Qalqila to reconcile with some of its people on the tribute, while others preferred to evacuate from it, so they joined the country of the Romans, then Muawiyah led two thousand men inhabited by Qalqila and cut them with the herds and made them the herds. The Byzantines mobilized a large army to confront Habib bin Maslama, so the Caliph provided it with six thousand fighters, and it was said twelve thousand, they came out of Kufa under the leadership of Salman bin Rabia Al-Bahili, and defeated the Romans on the Euphrates River. Then Habib marched into Armenia and conquered the cities of Dubil, Al-Nashwa, Jarzan and Tbilisi. Then the conquests in the east and west stopped due to the turmoil of the internal conditions in the countries of the Muslims at the end of the Caliphate of Othman bin Affan.