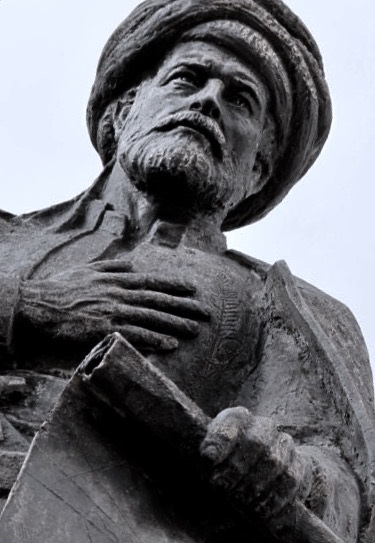 Ahmad Muhiddin Piri (Turkish: Ahmet Muhiddin Piri), known in Turkish as “Piri Reis” (Turkish: Piri Reis) (born between 1465 and 1470 and died between 1554 and 1555). He is a marine captain and an Ottoman Muslim cartographer, and he is credited with being the real discoverer of America after revealing his maps acknowledging this. Piri Reis is known primarily today for his maps and charts collected in his Book of Bahri, a book containing detailed information on early navigation techniques as well as relatively accurate charts of their time, and describing important ports and cities in the Mediterranean. He gained fame as a cartographer when, in 1929, a small portion of the first map of the world, made in 1513, was discovered in Istanbul's Topkapi Palace. His world map is the oldest known Turkish atlas showing the New World, and one of the oldest maps of America still found anywhere (the oldest known map of America is Juan de la Cosa in 1500). The Piri Reis map is centered on the desert at the latitude of the Tropic of Cancer. With the intensification of the Portuguese attack on all Islamic countries at the beginning of the sixteenth century, the Ottomans were interested in maritime geography, and the Ottoman sailors at that time were able to reach the Atlantic Ocean and reach the Indian Sea, and they drew maps of the coasts (Portlan ). And the first to stand out in that field was Berry Reese. And if we know that he was a captain on one of the ships in the naval battle of Modon in 1500 AD, and his age was between 30 - 35 years old, we can expect that he was born during 1465 - 1470. He grew up as a sailor, and partnered with his uncle Kamal Reis (died on Shawwal 16, 916 AH / January 16, 1511 AD) in some naval battles, then was appointed commander of the Suez Fleet, and was able to seize Muscat in 1551 AD, and clashed in Basra with the Portuguese fleet and was defeated in that battle, then returned to Egypt. As a result of the intrigues of the governor of Basra, Qubad Pasha, he was executed in Egypt in 960 AH (1552 AD) or in 962 AH (1555 AD) according to some other sources.

Ottoman campaign against the Portuguese

Caliph Suleiman the Magnificent sent a naval expedition led by Piri Reis, and it recovered Aden in 958 AH, then marched to Ash-Shahr, and finally its ships docked in Muscat, laid siege to it, and obliged the Portuguese commander to surrender, then marched to Hormuz, and could not enter it, so she set out for Qeshm Island and occupied it. , and from there to Basra, then returned to Bahrain when I learned of the coming of help from India to the Portuguese, then returned to Suez, where its leader Perry Reis was summoned to Istanbul, and he was executed for the failure of his campaign, as it appeared that he was the cause of that failure as he began working in trade, or was His interest in the affairs of the campaign is weak. and