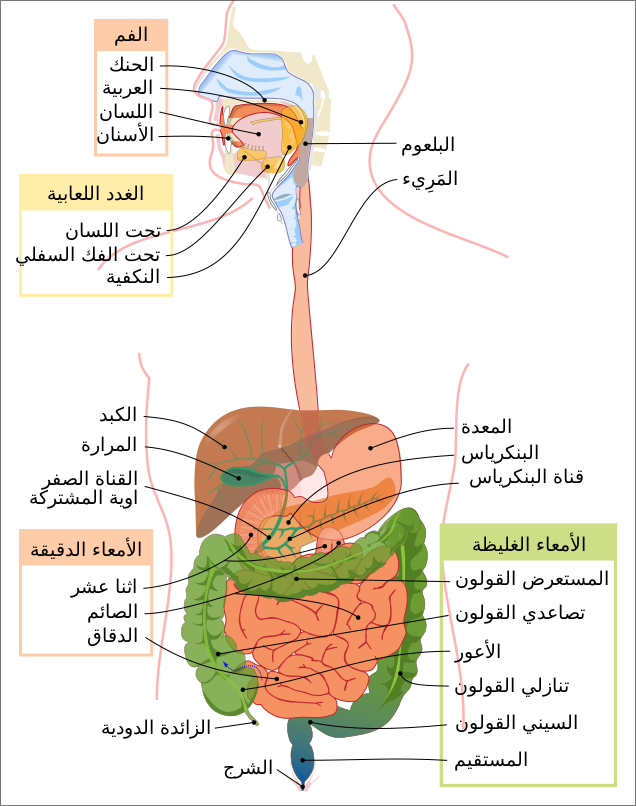 The digestive system is a long, winding canal that begins in the mouth and ends at the anus. It is the system responsible for digesting food, as it converts complex and large food particles into smaller absorbable particles; That is, it can penetrate through cell membranes. This process is carried out by mechanical effects caused by muscles and teeth, and chemical effects stimulated by enzymes. The digestive process has several stages in the digestive system, beginning in the mouth (oral cavity). The process of digestion involves breaking down food into smaller and then smaller components that can be absorbed and digested into the body. The secretion of saliva helps to produce a bolus that can be swallowed to pass into the esophagus and then the stomach. Saliva also contains a catalytic enzyme called amylase that starts its action on food in the mouth. There is another type of digestive enzyme called lingual lipase, which is secreted by some of the lingual papillae to enter the saliva. The process of chewing food also aids digestion by the teeth and muscular contractions of peristalsis. The presence of gastric juice in the stomach is essential to the continuation of the digestive process because mucus production occurs in the stomach. Peristalsis is the rhythmic contraction of muscle that begins in the esophagus and continues along the stomach wall and into the rest of the digestive system. This leads to the production of chyme, which is absorbed as chyle in the lymphatic system when completely broken down in the small intestine. Most food digestion occurs in the small intestine. Water and minerals are absorbed back into the blood in the colon and large intestine. The waste products from the digestion process are excreted from the anus through the rectum.