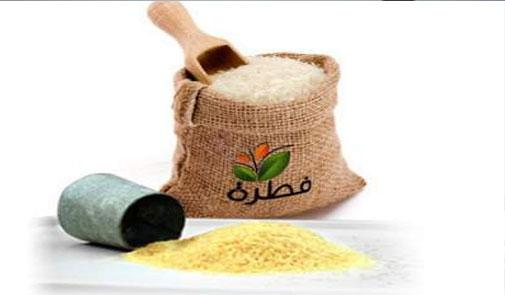 Zakat Al-Fitr or Al-Fitr Charity.. is Zakat for the souls; A known amount of charity, from a specific person, with specific conditions, on behalf of a specific group, for a specific group, which is obligatory by breaking the fast from Ramadan, a purification for the fasting person: from idle talk, obscenity, and food for the poor. It is obligatory at sunset from the night of Eid, the time of Eid al-Fitr and the end of the fast of the month of Ramadan, until just before the Eid al-Fitr prayer.

Zakat linguistically: growth, increase, purity, and blessing, it is said: Zakat plant: if it grows and increases. It was said that it was taken from the fitra. Because it is the charitable giving of souls, and instinct is the nature. God Almighty said: “It is the nature of God in which He made people” (Al-Rum:30). That is, it was formed upon which people were formed. On these two meanings, there is a difference of opinion as to the reason for calling it Zakat al-Fitr: It was said of adding a thing to its cause or time; Because breaking the fast in Ramadan is the reason why it is obligatory, so it was added to it; Because it is obligatory, it is said: “Zakat Al-Fitr.” This is supported by what was mentioned in some of the hadiths of Ibn Umar: “Zakat al-Fitr is from Ramadan” (Sahih Muslim 984). This is preferred by Al-Hafiz Ibn Hajar Al-Asqalani and Ibn Uthaymeen. And it was said that it is the charity of the soul, and the fitrah is the creation. God Almighty said: “It is the nature of God in which He created people” (Al-Rum:30). Ibn Qutayba and al-Nawawi said it. It is said: zakat al-fitr, and charity al-fitr, and it is said to the source: fitra, and it is a generative word, neither Arabic nor Arabized, but rather idiomatic for jurists.

The correct ruling on zakat al-fitr is that it is an obligation. and the meaning of imposed; Meaning: it is obligatory and obligatory, and the people of knowledge conveyed unanimously on that. والأدلة على وجوبها من حديث عبد الله بن عباس قال: «فَرَضَ رَسُولُ اللَّهِ صَلَّى اللَّهُ عَلَيْهِ وَسَلَّمَ زَكَاةَ الْفِطْرِ طُهْرَةً لِلصَّائِمِ مِنْ اللَّغْوِ وَالرَّفَثِ وَطُعْمَةً لِلْمَسَاكِينِ مَنْ أَدَّاهَا قَبْلَ الصَّلاةِ فَهِيَ زَكَاةٌ مَقْبُولَةٌ وَمَنْ أَدَّاهَا بَعْدَ الصَّلاةِ فَهِيَ صَدَقَةٌ مِنْ الصَّدَقَاتِ». And his saying: “purification”: that is, a purification for the soul of those who fasted Ramadan, and his saying “and obscenity” Ibn Al-Atheer said: “Rifth here is obscenity from words, and his saying “and food”: by adding the ta’ah, which is the food that is eaten. His saying: “Whoever pays it before the prayer”: that is, before the Eid prayer. His saying: “It is an accepted zakat.” What is meant by zakat is the al-Fitr charity. Awn the idol explained by Abu Dawood. That is, before people go out to the Eid prayer. In a hadith on the authority of Ibn Umar, he said: “The Messenger of God, may God bless him and grant him peace, enjoined zakat al-Fitr, a saa’ of dates or a saa of barley, on the slave and free, and the