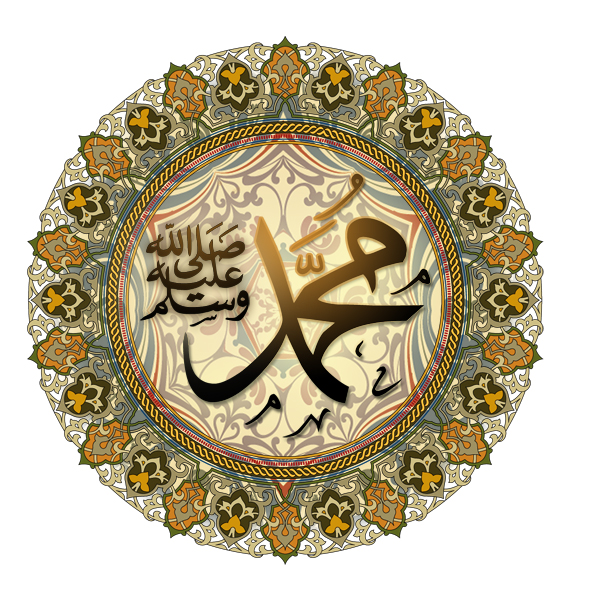 Abu al-Qasim Muhammad ibn Abdullah ibn Abd al-Muttalib (12 Rabi’ al-Awwal 53 BC - 12 Rabi` al-Awwal 11 AH) (April 22, 571 - June 8, 632) is the Messenger of God to mankind and the jinn in Islam; He was sent to restore the worlds to the unification of God and his worship like all prophets and messengers, and he is their seal, and he was sent to all people, and Muslims believe that he is the most honorable of creation and the master of mankind, and they believe in him infallibility. When his name is mentioned, Muslims append the phrase “may God’s prayers and peace be upon him” with the addition of “and his family” and “and his companions” in some cases, because of what was mentioned in the Qur’an and the Sunnah of the Prophet, which urges them to pray for him. Muhammad left a great impact in the hearts of Muslims, and the manifestations of their love and veneration for him multiplied by following his command, his way of life and his devotion to God, and their memorization of his words, actions and attributes and collected this in books known as biography books and the Prophet’s hadith, and their celebration of his birth in the month of Rabi’ al-Awwal every year. The Jewish writer Michael Hart considered him to be the most influential figure in the history of all humanity, as "the only human being in history who has succeeded in absolute success on the religious and worldly levels." Medina), which corresponds to the year 570 or 571 AD and 52 BC. He was born an orphan father, and lost his mother at an early age, and was raised under the care of his grandfather Abdul Muttalib, then after him his uncle Abi Talib, where he grew up, and at that time he worked in shepherding and then in trade. At the age of twenty-five he married Khadija bint Khuwaylid and had all his children with her except for Ibrahim. Before Islam, he was rejecting idolatry and pagan practices that were prevalent in Mecca. Muslims believe that the revelation came down on him and he was assigned the message when he was forty years old, he ordered the invitation secretly for three years, after them he spent another ten years in Mecca openly at the invitation of its people, and all those who came to it from merchants, pilgrims and others. He migrated to Medina, which was called Yathrib at that time in 622 AD when he was fifty-three years old, after the masters of Quraish who opposed his call and sought to kill him conspired against him. And the Arab tribes, where the Arabs united for the first time on a monotheistic religion and a unified state, and called for the renunciation of racism and tribal fanaticism.

Sources of his biography