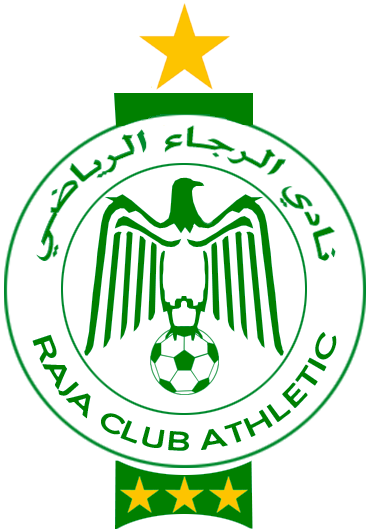 The Raja Sports Club (French: Association Sportive du Raja Club Athletic, meaning the Sports Association of the Raja Club Athletic), known simply as Raja Sports Club (French: Raja CA), is a Moroccan sports club from the city of Casablanca. It was founded on March 20, 1949 by Moroccan trade unionists in the Derb Sultan neighborhood. Raja has never been relegated from the Moroccan National Championship since its inception in 1956 alongside the poles Wydad Athletic and the Royal Army, and Raja Sports has played its matches at Mohammed V Stadium since its founding in 1955. Raja is the club in Morocco with the most continental titles, and it is the only Arab club with Al Ain that reached the 2013 Club World Cup final. It is also the most successful club in the African Champions League after the Tunisian Esperance Sportive Club in the Maghreb. In 2000, he was ranked by FIFA in the tenth place in the world after his place on the throne of African football and his performance in the 2000 FIFA Club World Cup. According to the Confederation of African Football's classification of the best African clubs in the twentieth century, Raja was ranked third in Africa after Al-Ahly and Zamalek. In addition, Raja Sportive is the most successful Moroccan team in the twenty-first century, winning 12 official titles since 2000. The Green Eagles are the most successful locally in Africa, winning 8 titles in official competitions. Raja is one of the most popular teams in Morocco, it is traditionally considered the club of the people. Raja has old rivalries with some clubs, the most famous of which is its competition with Wydad Sports Club and the Royal Army. Two Clasico matches bring together three of the most crowned and popular Moroccan clubs. Since December 14, 2020, the club has been temporarily chaired by Rachid Al-Andalusi, after Jawad Al-Zayat resigned from his position. Lassad Chebbi has been the coach of the team since April 13, 2021.

Although the history of the establishment of the Raja Club in Casablanca is somewhat recent compared to the history of the founding of the old oval clubs, as is the case with the Olympic Club in Casablanca, which was founded in 1904 AD, or as the Al-Yasam Club, in whose ranks the spiritual father of the oval ball played, “Mohammed bin Hassan Al-Tunisi Al-Afani, nicknamed B (Father Gekko)”, or some teams that were in the form of football associations. Al-Rajaa, as a club, came to reunite about eight amateur clubs that represented the neighborhoods of Darb al-Sultan, so the idea of ​​the notables of the region began, which is to establish a club.