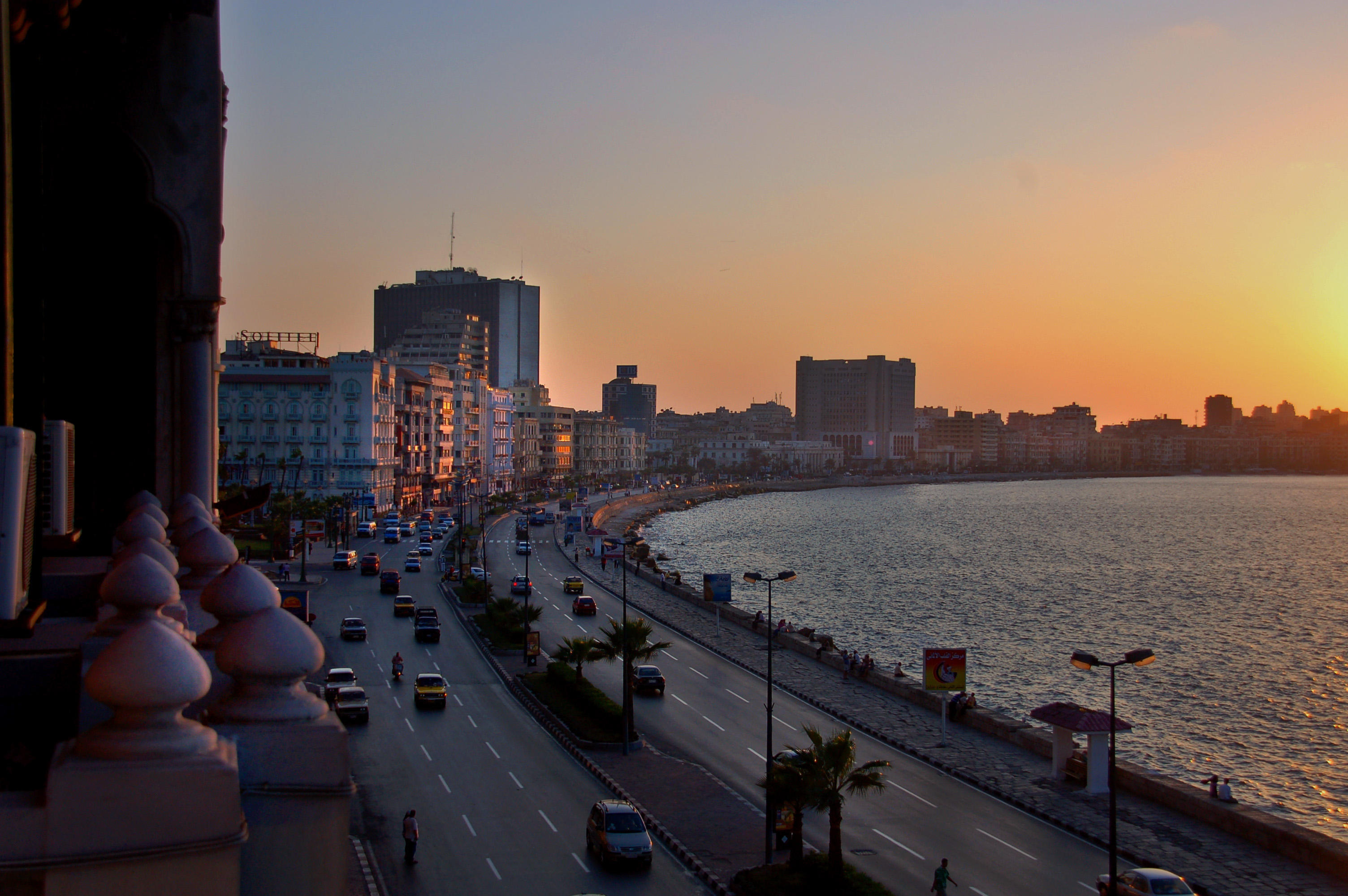 Alexandria (English: Alexandria, Greek: Ἀλεξάνδρεια) is an Egyptian city on the southern coast of the Mediterranean and one of the ancient capitals of Egypt. It was the capital of Egypt before Cairo and a center of cultural radiation in the Ptolemaic era, and now it is the second largest city after the capital Cairo and the largest city in the Alexandria Governorate. Alexandria has a population of 4.1 million, and it has the largest Egyptian port, serving about 80 percent of all Egypt's imports and exports. Alexandria has two international airports, "Nozha Airport" and "Borg El Arab Airport". Alexandria is also a tourist city extending for about 32 km (20 mi) along the Mediterranean coast in northern Egypt. And the Library of Alexandria (the New Library of Alexandria). Alexandria is an important industrial center because of the oil and natural gas pipelines from Suez to Alexandria. Alexandria has an important function for trade between Europe and Asia, because it has benefited from the ease of connection between the land, the Mediterranean, and the Red Sea. Alexandria was founded on a small Egyptian village called Rakotis by King Alexander the Great of Macedonia, who made it the capital of Egypt in 331 BC. Alexandria, the capital of Egypt, was preferred for about a thousand years until 641 when Fustat was founded. In ancient times, Alexandria was one of the most famous cities in the world. Alexandria was known for its lighthouse (one of the Seven Wonders of the World), the Library of Alexandria (the largest library in the ancient world) and the Catacombs (Catacompos) of Kom el Shoqafa (one of the Seven Wonders of the Middle Ages). In 1994, more details about Rakotis before the arrival of Alexander, and Alexandria during the Ptolemaic era, began to be revealed.

Alexandria was founded by Alexander the Great in 332 BC to be a point of contact between Greece and the Nile Valley. The principal architect of the project was Dinocrates. Before Alexandria was adopted, there was a fishermen's village called Rakotis in its place. After Alexander planned Alexandria, he walked from Egypt to the east and returned to Egypt because he died in Mesopotamia, but it is likely that his body was transferred to it during the reign of Ptolemy I and was buried in Alexandria in Soma during the reign of Ptolemy II. In the Ptolemaic era, the city expanded and in a very short period became larger than Carthage, and remained the most important Greek city in Egypt, and the center of Hellenistic culture in the Mediterranean region. Alexandria was governed by Greek laws, and many Egyptians lived there, and it was not a city closed to Macedonians, and there was a mixed passport between Egyptians and Greeks. Most of the Alexandrian Egyptians were employees, shop owners, merchants, and sellers in the markets. The most important Alexandrian buildings that were adopted during the reign of Ptolemy I were the Muses or M