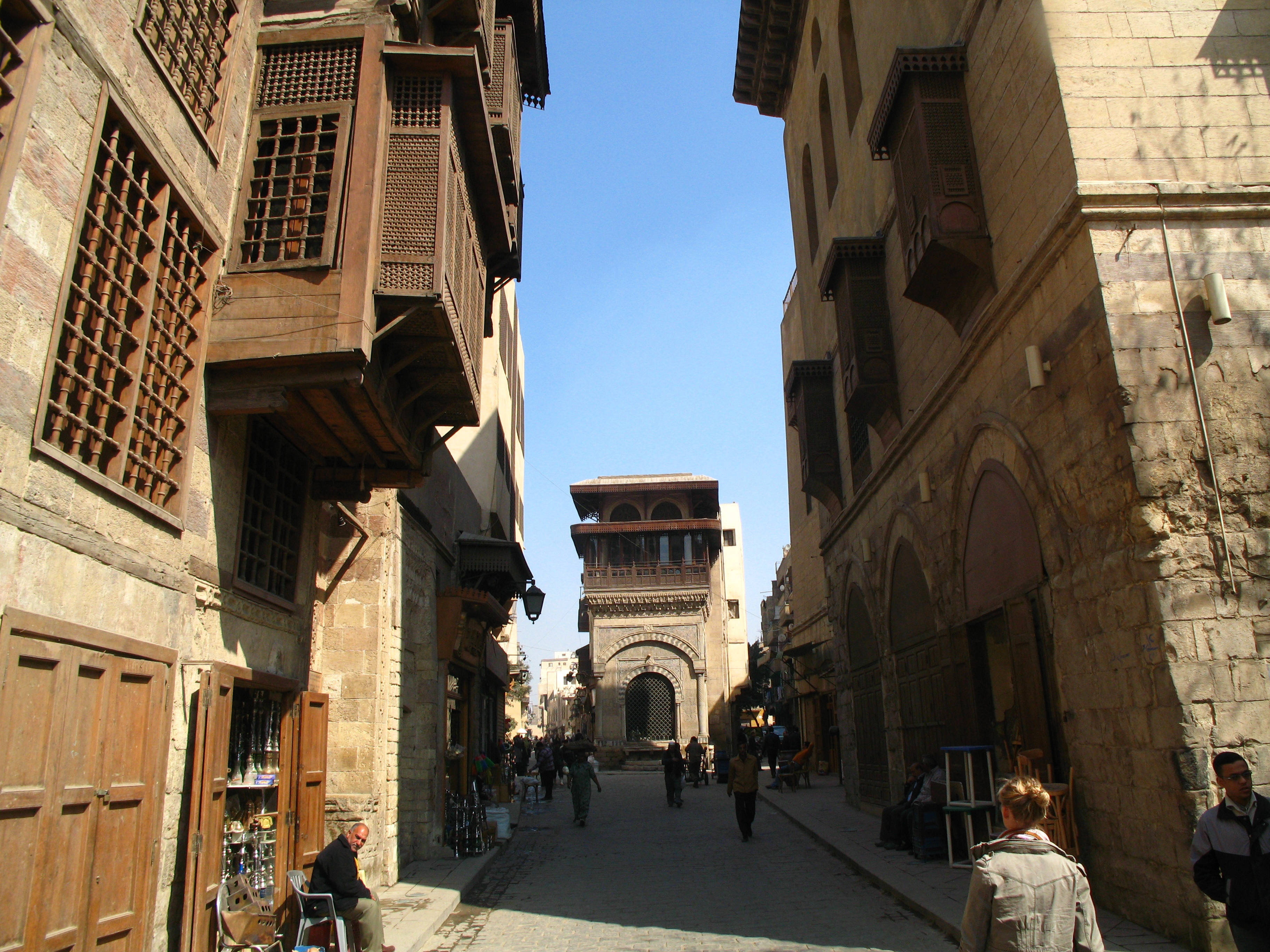 Al-Mu'izz ledin Illah Street - . One of the most important historical streets in Egypt and Cairo. When Jawhar al-Siqali built Al-Mu'izzyyah, he made two gates far from each other in its northern wall, namely Bab al-Nasr and Bab al-Futuh. And in the southern wall, two adjacent gates were made, which were called Bab Zuwaila, and a main street was made from Bab al-Futuh to Bab Zuwaila, and this street was called al-Muizz Li-Din Allah Street. Al-Moez Street is also known as Al-Adham Street, Cairo Street, and Al-Kasbah Street. Jawhar al-Siqali built on his eastern side a palace for the Caliph al-Muizz, known as the “Great Eastern Palace,” because his son, Aziz Billah, built in front of him a “small palace known as the Little Western Palace.” After Salah al-Din al-Ayyubi destroyed the Fatimid state in Egypt, he, his family, and the matter of his state lived in the Great Palace, and this palace remained the seat of the Ayyubid rule until the building of the mountain castle on the Mokattam mountain, and the full king, the nephew of Salah al-Din, lived in it. For the sake of what I have degraded and adopted in the region neighborhoods, streets, schools and homes. Al-Moez Street was not only Cairo's main street, but its extensions from the side of Bab Zuweila were connected to Fustat and from the side of Bab Al-Futuh to the Husseinieh and Al-Zaher neighborhoods. Al-Moez Street was full of shops and markets to the extent that the number of shops from outside Bab Al-Futuh to Bab Zuwaila was about 1200, and the street preferred its position in the Mamluk era and had traditions that must be observed. And there was a law that required shop owners to light up their shops with lanterns all night long, and every shop owner had a jar full of water dedicated to fighting the fire if it broke out. And there were garbage workers, adders, sweepers, and security guards. Al-Moez Street is the most popular street in Cairo and Egypt, full of antiques from the Middle Ages and from the Mamluk era in particular. The street extends from Bab Al-Futuh to Bab Zuwaila, and this area includes the streets of Bab Al-Futuh, Amir Al-Juyoush, Al-Nahhasin, Bain Al-Kasserine, Al-Sagha, Al-Ashrafiya, Al-Akkadin, Al-Manakhiliyah, Al-Munajjid and Al-Sukaria. The monuments mentioned by Al-Maqrizi on the street are: Al-Hakim Mosque by God’s command, Qaitbay Agency, Beit Al-Suhaimi, Suleiman Agha Al-Silhdar Mosque, Al-Aqmar Mosque, Sabil Abdul Rahman Katkhuda, Prince Bashtak Palace, Sultan Qalawun Mosque, Al-Zahir Barquq School, Torbat Al-Saleh Ayoub, Al-Salihiya School Al-Kamiliyah School, Al-Nasir Muhammad Ibn Qalawun School, Al-Ashraf Barsbay Mosque, Sultan Al-Ghouri School and Path, Al-Moayyed Bath, Al-Moayad Mosque, and others. During the era of the Minister of Culture, Farouk Hosni, a huge effort was made to restore the monuments of the historical street