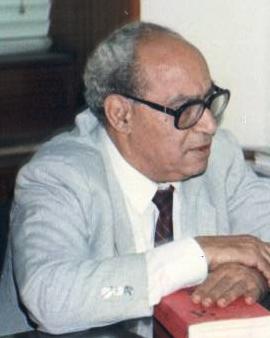 Louis Awad (Maghagha, Minya, January 5, 1915 - Cairo, August 1990), a great Egyptian thinker, writer, dramatist, translator, critic and historian. He demanded the use of the Egyptian language in writing. And Louis Awad considers that the Egyptians did not literally scratch the Arabic, but they mixed it with Coptic words that came from the Demotic language. And the book “Al-Ma’rib min Al-Kalam Al-Ajami Ala Al-Mu’jam” by Abu Al-Mansur Al-Jawaliqi (1073-1145) proved that the Arabic language contains more than 1500 non-Arabic words, including many words that were used in the Arabian Peninsula in the pre-Islamic era. He has a book that sparked great controversy about the language called "Introduction to the Fiqh of Arabic Language". He received a master's degree in English literature from Cambridge University in 1953 and a doctorate in French and English literature from Preston University in the United States of America in 1953. He was the first Egyptian to head the Department of English Literature at the Faculty of Arts at Cairo University He worked as Zayer Professor at the University of California in Comparative Literature in 1974 Supervised the literary section of the Republic Journal Member of the editorial board of Al-Ahram Journal since 1983 Member of the Supreme Council for the Sponsorship of Arts, Letters and Social Sciences until 1973

The books he wrote

The Order of Merit of the first class on Flag Day 1969 Knight Medal in Science and Culture presented to him by the French Ministry of Culture in 1986 State Appreciation Award in Arts from the Supreme Council of Culture, 1988