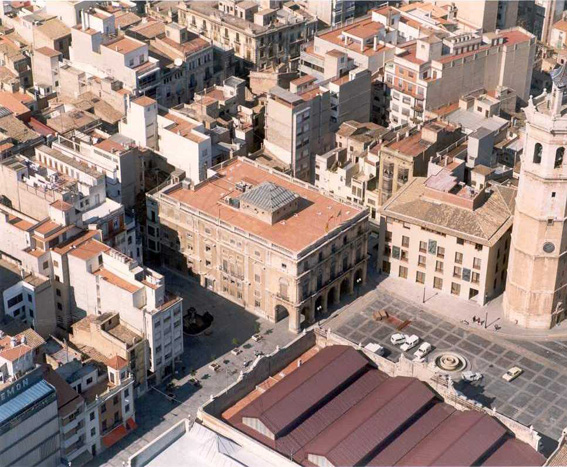 Castelló de la Plana - or locally simply Castelló - is a city in the Valencian Country, capital of the Plana Alta region and the province of Castelló. The town is established on an extensive plain facing the coast, surrounded by different mountain ranges in the interior. According to the 2020 register of the INE, it has a population of 174,264 inhabitants, being the fourth city in the Valencian Country in number of inhabitants, distributed in two urban centers (the city proper and El Grau) and several scattered population groups in the 107.50 km² extension of its municipal term. Until 1252, its inhabitants lived on the Magdalena hill, and they moved to La Plana that same year thanks to the permission granted by King Jaume I the previous year, the date of the city's foundation, an event that it is still remembered with the celebration of the Festas de la Magdalena, declared in 2010 to be of International Tourist Interest. Since its designation as the capital of the province of the same name in the middle of the 19th century, the city has been evolving, going from being an agricultural population to an industrial and service city, thanks to the subsequent installation of various political and judicial institutions , economic, cultural and social that have helped the prosperity of the city. Among the relevant events that have taken place in the last 150 years, the signing of the Normes de Castelló, regulating Valencian, in 1932 stands out; the creation of the Jaume I University in 1991; or the celebration of the international golf tournament Castelló Masters Costa Azahar, belonging to the PGA European Tour. The gentilici of this municipality, in its different forms, is Castellonenc, Castellonenca, Castellonencs, Castellonenques, gentilici that it shares with Castelló de Rugat (the Vall d'Albaida) and Castelló de la Ribera.

The main urban center is about 30 m above sea level and about 4 km from the coast. In its municipal area, which extends along 10 kilometers of coast, is the confluence of the 40° parallel and the 0° meridian of Greenwich, this fact is commemorated with a monolith in the Meridian Park. The famous French mathematician and astronomer Pierre Méchain moved to Castellón to give accuracy to the Meridian of Paris, which at that time rivaled that of Greenwich as the main meridian in the world. He settled in the capital of La Plana to try to resolve time and location conflicts but on September 20, 1804, he died in Castelló. Two types of landscapes are combined: on the one hand, its 14 km coastline . equipped with fine and warm beaches with an important hotel offer, highlighting that of Pineda in the North and very close to the beach the Natural Park of the Pineda Park, and in the South Playa del Serrallo. 30 miles from Grau you can see the Columbretes Islands, 14 islets of volcanic origin, declared a protected natural park. The northern sector of the term makes up its other landscape, invaded by the striations of the mountain core of the Sierra del Desert de les Palmes.

Between the mountain and the sea, there are a series of Quaternary glaciers that descend with a gentle slope towards the marshes, separated from the sea by Platja del Pinar. The coastline is 10 kilometers long. It is low and sandy and south of the port is occupied by the Serrallo industrial estate. The Río Sec de Borriol rises on the western slope of the Desert de les Palmes and descends through the Vall de Borriol. Later, it fits its line on the quaternary glacier of La Plana, where it describes a great curve to the west and north of the city, getting lost in the marshland. To the west of the term, there is the Maria Cristina Reservoir, and the La Rambla de la Vídua reservoir shortly before it flows into the Millars River, whose waters supply the traditional vegetable garden. The Menescal pond was an old pond