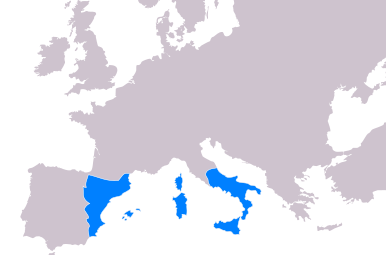 The Crown of Aragon (Aragonese: Corona Aragonum, Latin: Corona Aragonum; also known by other names) was the set of territories that were under the jurisdiction of the King of Aragon from 1162 to 1715. This set territorial was initially formed by the Kingdom of Aragon and the county of Barcelona, ​​and although other territories were incorporated over the centuries, the heritage of Aragon and Barcelona always remained united. Its birth is the result of the dynastic union that arose from the marriage commitment between the Count of Barcelona Ramon Berenguer IV and Princess Peronella of Aragon in 1137, who bequeathed their territories and titles to their son and common successor, Alfonso el Cast, first king of Aragon and count of Barcelona (1162/1164). The political structure of the territory transcended the initial dynastic union and was organized as a federation of medieval states (1319) respecting the singularities of each territory and developing an equivalent political structure and similar to each other: Cortes, Generalitat and Constitutions, coordinating the joint foreign policy and converging the diversity of the states in the unitary figure of the sovereigns of the House of Aragon of the lineage of the counts of Barcelona, ​​whose crown and main title was to be kings of Aragon. The death without heir of Martí l'Humà (1410) meant the extinction of the lineage of the counts of Barcelona and the advent of the Trastàmara Dynasty in the Royal House of Aragon.

Denominations of the territorial set

The name "Crown of Aragon" appeared in the fourteenth century during the reign of James the Just (1267-1327), when he transformed personal union into a dynastic union by consecrating the indissoluble "Union" of the Kingdom of Aragon, Kingdom of Valencia and the Principality of Catalonia. Based on the constitution of Our Successors of 1299, James II instituted in the courts of Tarragona of 1319 that before the beginning of the reign, the successor to the Crown should perform the sacramentum of the "Union", swearing the indivisibility of 'Aragon, Valencia and Catalonia. This oath was extended in 1344, when Peter the Ceremonious re-annexed the Kingdom of Mallorca and also included this territory in the Oath of Union. From then on, a "union of states" was established with a legal entity and its own rights that the monarch could neither divide nor alienate. In current historiography, however, the name "Crown of Aragon" has been used since the dynastic union between the counts of Barcelona and the kings of Aragon (1164). Initially, in the twelfth century, the territory did not have a common and specific name, using the expression "Aragonum et Catalonie" of Aragon and Catalonia, when it was necessary to refer to something common. Throughout the thirteenth century the following denominations are documented: in the Privilege of annexation of Mallorca of 1286 "kingdom, dominion and crown Aragonum et Catalonie" kingdom, dominion and crown of Aragon and Catalonia, in the Courts of Monsoon of 1289 Crown Royal, in 1295 Crown Daragon e in the County of Barcelona, ​​and also denominations such as Royal Heritage and Royal Scepter. In the fourteenth century appears the aforementioned expression "Crown Aragonum" Crown of Aragon, sometimes defined as the Royal Crown of Aragon, Kingdoms of Aragon, "Crown of the Kingdom of Aragon" Crown of the Kingdom of Aragon, "Crown Regum Aragoniae" Crown of the Kings of Aragon, or simply Aragon. Between the twelfth and fourteenth centuries, the documentation speaks little of the Crown of Aragon and more of the House of Aragon, although the expression of the Crown of Aragon is already observed with James the Just, thus prevailing the hierarchical title of kingdom ahead of the county and principality. In the fifteenth century the usual denominations were "Crown of Aragon", "Royal Crown" and "Royal Crown of Aragon"; more specifically, just during the interregnum prior to the Caspian Compromise (1410-1412) and therefore before the enthronement of the Trastamaras, the denominations

INSERT INTO `wiki_article`(`id`, `article_id`, `title`, `article`, `img_url`) VALUES ('NULL()','Corona_d'Aragó','Crown of Aragon','more specifically, just during the interregnum prior to the Caspian Compromise (1410-1412) and therefore before the enthronement of the Trastamaras, the denominations','https://upload.wikimedia.org/wikipedia/commons/thumb/0/0a/Aragonese_Empire_1443.svg/langca-386px-Aragonese_Empire_1443.svg.png')