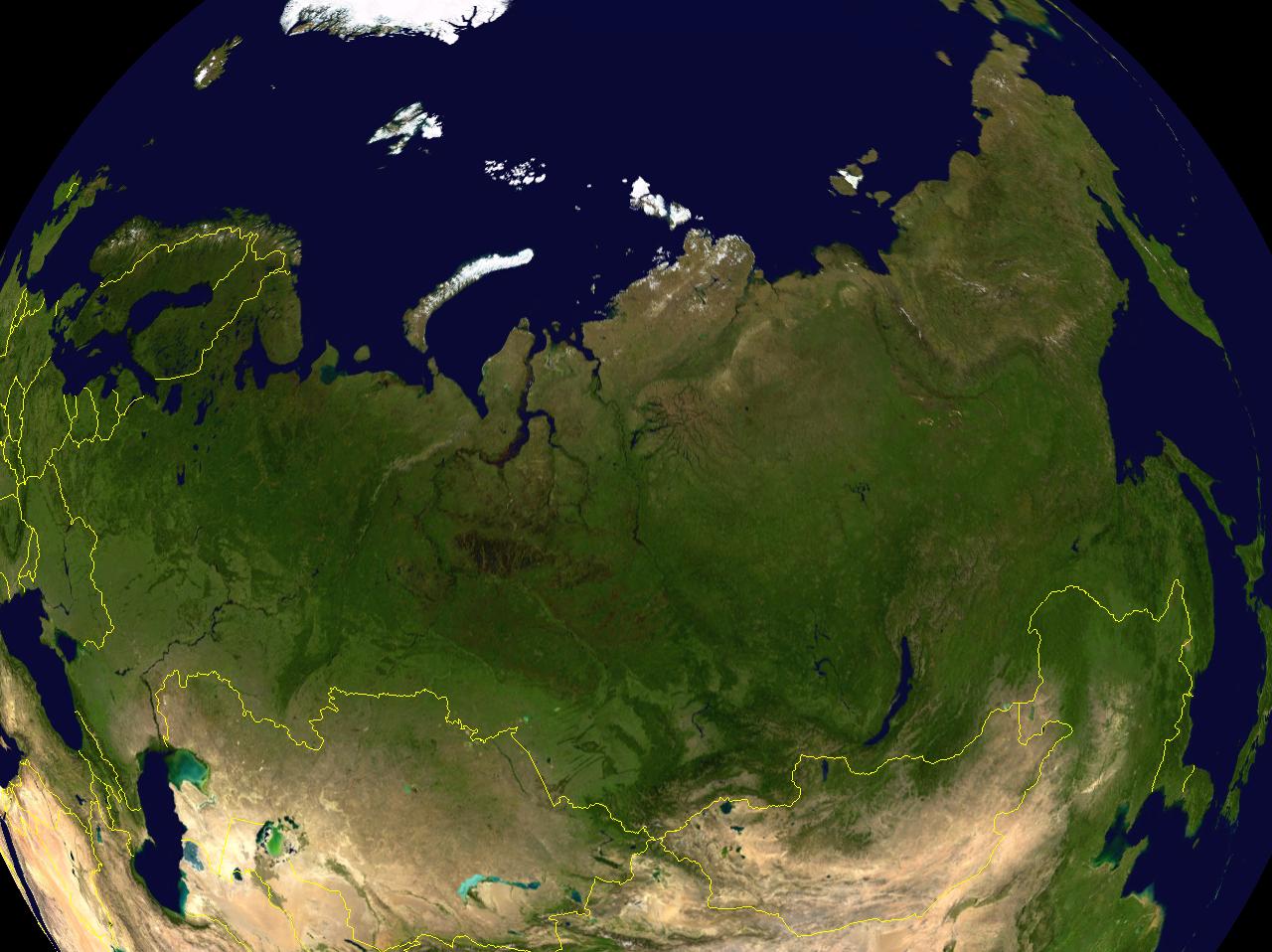 Russia (Russian: Росси́я, Rossia, [rɐˈsʲijə] (?·p.)) or Russian Federation (Russian: Росси́йская Федера́ция, Rossíiskaia Federàtsia, [rɐsʲijskəjə fʲɪdʲɪratsɨjə] (?·p.), abbreviated as РФ, RF) is a state transcontinental of Eurasia. It is a semi-presidentialist republic made up of federal subjects. Russia borders Norway, Finland, Estonia, Latvia, Lithuania, Poland, Belarus, Ukraine, Georgia, Azerbaijan, Kazakhstan, the People's Republic of China, Mongolia and North Korea. The eastern end of the country—and of the Asian continent—is very close to the US state of Alaska. With an area of ​​17,075,400 square kilometers, Russia is the largest state in the world. Its surface area is one-eighth of the total earth's surface and contains the largest reserve of mineral and energy resources in the world. With 146 million inhabitants in the 2017 census, it is the ninth most populous state, but the demographic trend is to decrease. The history of Russia begins with the Eastern Slavs. The Slavs emerged as an ethnic group in Europe between the 3rd and 4th centuries. Founded and ruled by the Vikings and their descendants, the first Eastern Slavic state, Kievan Rus, emerged in the 9th century and adopted the Christianity of the Eastern Roman Empire in 988, which initiated the synthesis of the Eastern Roman and Slavic cultures, which would define Russian culture for the next thousand years. Kievan Rus disintegrated and the lands were divided among small feudal states. The most powerful successor was the Grand Duchy of Moscow, which was the main force of the Russian reunification process in its struggle for independence against the Golden Horde. Moscow gradually reunified the surrounding Russian principalities and eventually dominated the cultural and political legacy of Kievan Rus. By the 18th century, it had already spread through conquests, annexations and explorations, and was transformed into the Russian Empire, which stretched from Poland in the west to the Pacific Ocean in the east. Russia became the largest constituent country of the Soviet Union, the world's largest constitutional socialist state and world superpower, until its dissolution at the end of the Cold War. After the dissolution of the Soviet Union in 1991, the Russian Federation is considered the legal successor of the USSR, and the USSR is the predecessor state of the Russian Federation. By common agreement of the member states of the CIS, it was decided to consider the Russian Federation as the successor state of the USSR with all the ensuing consequences, including the transfer to the Russian Federation of the position of permanent member of the Security Council of the United Nations and the recognition of the Russian Federation as a nuclear power in the sense of the nuclear non-proliferation treaty. It is one of the states known in the international economy as BRIC.

See also: Russian (town) The name Russia is derived from the word Rus (Русь, 'Rus'), a name that alluded to the territory controlled by the Russians of Kyiv. The first written mention of the term "Russia" (written in ancient Greek: Россия Rossia) dates back to the mid-10th century. It is found in the works of the Eastern Roman Emperor Constantine VII Porphyrogenitus De Ceremoniis and De Administrando Imperio as the Greek name for Rus. In the medieval sources of Western Europe, the form Rossia, adopted from the Roman Empire d 'Orient, has been found since the twelfth century along with the forms Russia, Ruscia, Ruzzia and, less often, Ruthenia. The form Rossia is found in the Latin texts of Marco Polo, Guillaume de Rubrouck, in several maps of southern European origin from the 14th and 15th centuries, including the Catalan Atlas and Fra Mauro's world map. There were also several variations of the name Rus in some letter or in the root (eg Rosie by Andrea Bianco). In Cyrillic notation