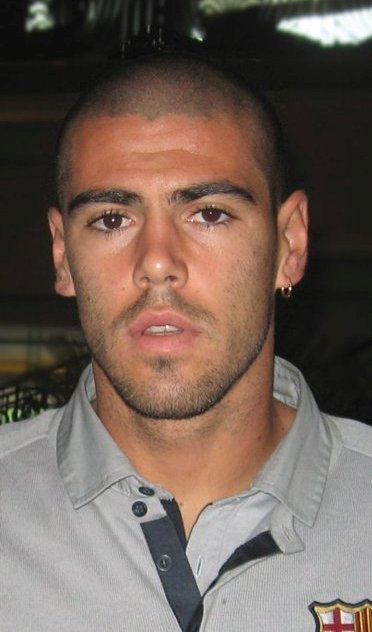 Born in L'Hospitalet de Llobregat. His family, originally from the town of Puebla de Sanabria (Zamora) emigrated to Catalonia after the Civil War. Valdés has developed his entire sporting career in the category of grassroots football for FC Barcelona, ​​a club he joined on July 1, 1992 at the age of just 10, from the Barça supporters' club "Cinc Copes". However, in September of that year, almost without starting the season, he was forced to leave the club, as his family moved to Tenerife for three years for personal reasons. In 1995 he returned to Barcelona and rejoined the club to play for various teams in the lower categories.

Louis van Gaal made his debut in the 2002-2003 season, in which he alternated his performances between FC Barcelona B and the first team. It made debut in the First Spanish division the 1 of September of 2002 in the party FC Barcelona-Athletic of Madrid. At just 20 years old, he defended Barcelona's goal in a total of 14 league games, alternating ownership with Argentine Roberto Oscar Bonano, conceding a total of 15 goals. He also played in six Champions League games, conceding just 3 goals. This season, however, was not entirely pleasant for Victor: Louis van Gaal, the same coach who had given him the opportunity to make his debut in the first team, was about to expel him from the club. After winning the title and being a starter in the Champions League, Van Gaal not only relegated him to the bench, but also forced him to play again in the subsidiary, Barcelona B, in the Spanish Second Division B. . Valdés considered it a humiliation and, not only did he not appear in the Barcelona B match, but he did not appear in training for three days. Only the mediation of President Joan Gaspart, who was confident in his potential, prevented him from leaving the club. In the middle of the season, Van Gaal was sacked due to poor results and his successor, Radomir Antic, again entrusted him with the title.

The following season, 2003-2004, began by alternating ownership with Turkish Rüştü Reçber, although he ended the season as a starter, thanks to the confidence of coach Frank Rijkaard. Consecration in the 2004-2005 season. The first Zamora The 2004-2005 season, already with the number 1 on the shirt, was its final consecration. He played as a starter in 35 of the 36 league games played (he was the player in the squad who played the most minutes), conceding only 25 goals (an average of 0.71 goals per game). He was one of the decisive players for FC Barcelona to be proclaimed champion of the Spanish first division, his first professional title. In addition, his excellent campaign awarded the Zamora Trophy to the least beaten goalkeeper in the league.

In the 2005-2006 season, Victor continued to be the team's starting goalkeeper and was again proclaimed league champion. Despite this, the goalkeeper of L'Hospitalet de Llobregat