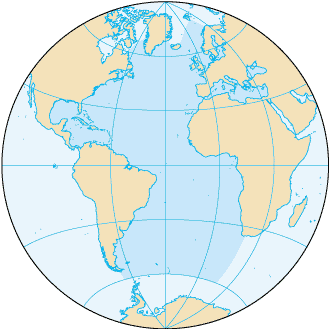 The Atlantic Ocean is the second largest ocean in the world; has an area of ​​106.4 million square kilometers (41.1 million square miles), covering 1/5 of the Earth's surface. The Atlantic is named from the Atlas of Greek mythology. The oldest mention of this term is from The Histories of Herodotus in 450 BC. The Europeans recently discovered other oceans,, the term “ocean” is similar to the waters after Western Europe now known as the Atlantic. The Greeks believed it was a giant river that circled the globe. The Atlantic is bordered by the continents of Europe and Africa to the east, and America to the west.