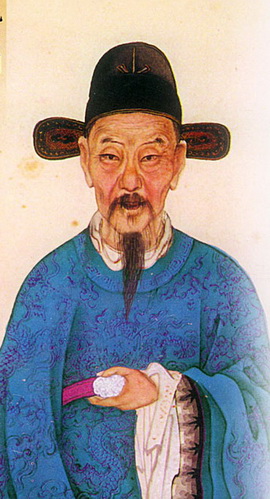 Chang Jujeng (Chinese pinyin Zhang Juzheng, simplified characters tradiční, traditional 張居正; 1525 - July 9, 1582) was a powerful great secretary during the reigns of the Ming emperors Lung-qing and Wan-li. In 1547 he passed the highest degree of official examinations and received the rank of Jinshi. He then worked at the Chanlin Academy, in 1567 he became the great secretary of Emperor Lung-qing, and after the accession of the new emperor Wan-li in 1572 he became the head of the great secretaries. During the early years of Emperor Wan-li's reign, he played a very important role as the emperor's teacher and de facto ruler of China, due to the monarch's immaturity. His determined foreign and economic policies brought the Ming Empire one of its successful periods. Under the influence of the Mongol invasions of the 1650s, Chang Jujeng set himself the goal of "enriching the country and strengthening the army," using legalist rather than Confucian methods. He contributed to the centralization of the administration, reduced various privileges, and revised the exemptions from the land tax. However, after Chang's death in 1582, many of his reforms and policies were abolished, and in 1584, his family was stripped of his accumulated wealth and wealth. He was not rehabilitated until more than half a century later, just before the fall of the Ming Dynasty.

Youth and the beginning of a career

Zhang Jujeng came from Jiang Ling District (in modern Jingzhou Prefecture in Hubei Province), born in 1525. He studied Confucianism and passed the examination system, passed the provincial examinations in 1540, and failed the metropolitan year in 1544, however he passed them three years later, still at an unusually young age, passed the palace exams and received the rank of Jinshi. He then joined the Chanlin Academy. In 1554 he resigned due to illness. He returned to service after six years, this time at the Directorate of Education (or Imperial University) and then again at the Chanlin Academy. He never held office outside Beijing. At the beginning of 1567, Emperor Jiaing died. The then-First Grand Secretary of Yu Jia (who had supported his career since the late 1940s) invited Zhang Jujeng, then a Chanlin academic, to draw up Jiajing's latest edict, a "political will," published the day after the monarch's death, and organized accession to the throne. the emperor's son Lung-qing. Chang was soon promoted to Grand Secretary. During Lung Qing's reign, Chang's influence grew, and in 1572, immediately after Lung Qing's death and the accession of Lung Qing's son Wan-li to the imperial throne, eunuch Feng Pao, head of the ceremonies directorate (s'-li-tien tai-chien, 司禮 監 太監), in cooperation with Chang Jujeng, succeeded in removing the then first Grand Secretary Kao Kung (the pretext was Kao Kung's disrespectful remark to the emperor). Chang Ju-cheng then headed the secretariat.

At the head of the government

Chang Jujeng remained in power for ten years, until his death in 1582. During his reign, he could count on the support of eunuchs, especially Feng Pao, and the emperor's mother, Empress Dowager Li, who served as regent. He could therefore choose his colleagues in the great secretariat himself; he also subordinately subordinated himself to the Ministry of Ceremonies and the Control Office, appointed his followers to a number of important positions in central offices and regions; they were mostly proactive and energetic men. With these measures, he gained a decisive say in the government, although he did not have the authority to order anything by virtue of his position