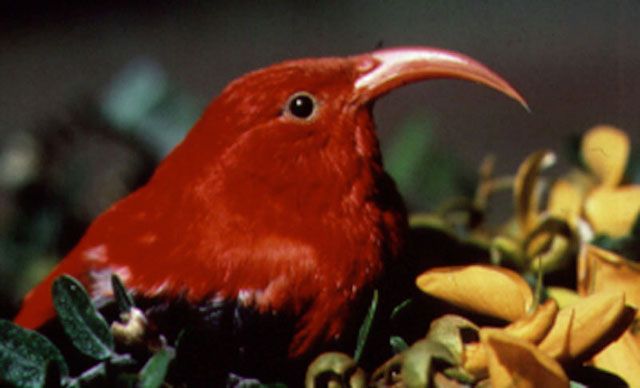 Drepanidinae, sometimes also a separate family Drepanididae, more recently classified in the subfamily Carduelinae) represent a group of smaller songbirds of the finch family, which live endemic to the Hawaiian Islands. They are closely related to bullfinches of the genus Carpodacus, but many wardrobes have developed anatomical features unlike any other finch. The great diversity within this group is the result of adaptive radiation in the island environment. It can be demonstrated, for example, on a wide range of beak shapes within individual species, from thick beaks to thin curved beaks designed for sounding plant flowers. Many species of wardrobes have been extinct since the human settlement of Hawaii, and the main causes of their extinction after the European discovery of the islands include habitat destruction and, above all, the presence of non-native invasive species.

The wardrobes are a sister taxon to bullfinches of the genus Carpodacus. The ancestors of the Wardrobes apparently lived in Asia, arriving in the Hawaiian Islands and undergoing adaptive radiation about 5.7-7.2 million years ago. This period coincides with the existence of the islands of Niihau and Kauai from the main Hawaiian chain. The most common genus of wardrobe that survived into modern times was the island wardrobe of the monotypic genus Melamprosops, which split about 5.8-5.7 million years ago. Second, the line comprising the genera Oreomystis and Paroreomyza split off, about 1 million years after the genus Melamprosops. Most of the other lines, which are characterized by strong morphological features, probably come from the Middle to Upper Pliocene after the formation of the island of Oahu, but before the formation of Maui. The island of Oahu probably played a key role in the formation of diverse morphological specializations among wardrobes. Below is a cladogram of modern wardrobes. Genera or positives with question marks (?) Are controversial or uncertain.

Pictures, sounds or videos about Wardrobes on Wikimedia Commons Taxon Drepanidinae in Wikidruz