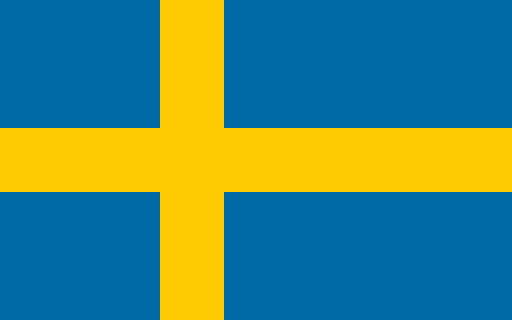 Sweden (Swedish [sværːjɛ]), full name The Kingdom of Sweden (Swedish), is one of the Nordic countries on the Scandinavian Peninsula in northern Europe. Sweden borders Norway in the west, Finland in the east and is connected to Denmark in the south by a unique bridge-tunnel over the Öresund Strait. With an area of ​​449,964 km², Sweden is the third largest country in the European Union. The total population is about 10 million, with a low population density (20 inhabitants per km2). The population is concentrated mainly in the southern half of the country. About 85% of the population lives in urban areas. The capital of Sweden is Stockholm, which is also the largest Swedish city. Sweden developed into an independent and united state during the Middle Ages. In the 17th century, the country expanded its territories, leading to the creation of the Kingdom of Sweden. The empire developed successfully and during the 17th century and the beginning of the 18th century it was one of the most important European powers. However, most of the countries conquered outside the Scandinavian Peninsula were lost again during the 18th and 19th centuries. The eastern half of Sweden, today's Finland, was subjugated to Russia in 1809. Sweden last entered the war in 1814, when it forced Norway to join a personal union with it by military means. Since then, there has been peace in Sweden and the country has pursued a foreign policy of non-participation in times of peace and a status of neutrality in times of war. Today, Sweden is a constitutional monarchy with a parliamentary democracy and a highly developed economy. In 1960, it was one of the founding countries of the Organization for Economic Co-operation and Development (OECD) and since 1 January 1995 it has been a member of the European Union. Sweden is part of the geographical area Fennoscandinavia. The climate is generally very mild due to its northern latitude and due to the considerable influence of the sea. Despite its high latitude, Sweden often has warm continental summers; lies between the North Atlantic, the Baltic Sea and the vast Russian Eurasian mainland. In general, the climate and environment vary significantly from south to north due to the huge difference in latitude, and much of Sweden has reliably cold and snowy winters. Southern Sweden is predominantly agricultural, while the north is heavily forested and includes part of the Scandinavian Mountains, which stretch to the west of the country. Much of the country is covered by forests. Sweden's most important natural resources include water, wood and iron ore. Sweden has a relatively high level of social policy and is considered an environmentally friendly, modern and liberal country. Sweden is a constitutional monarchy headed by King Charles XVI Gustav.

The name of the country (Sverige) is derived from the Germanic tribe Sveu (Swedish svear, Latin suiones), which in the Middle Ages inhabited the area of ​​central Sweden (Svealand) - Swerige (Svea rike, the Empire of Sveů) was originally a designation for this area. The name of the tribe is not entirely clear, it is probably derived from the Pragerman * swihoniz with the meaning "we ourselves".

Establishment of the state and the Vikings

The territory of Sweden was inhabited as early as the Bronze Age. The oldest inhabitants were probably hunters and gatherers, who subsisted on what the sea provided them (now known as the Baltic Sea). Sweden has a high concentration of prehistoric murals, most of which can be found in the province of Bohuslän. However, the oldest are those from the province of Jämtland, they are dated to the period around 9000 BC. It is not known when the Kingdom of Sweden was founded, but as early as 98, the Roman historian Tacitus wrote about the monarch who ruled over the land of Svealand. But historians generally consider the creation of Sweden to unite the territories of Svealand and Götaland under one monarch, the king