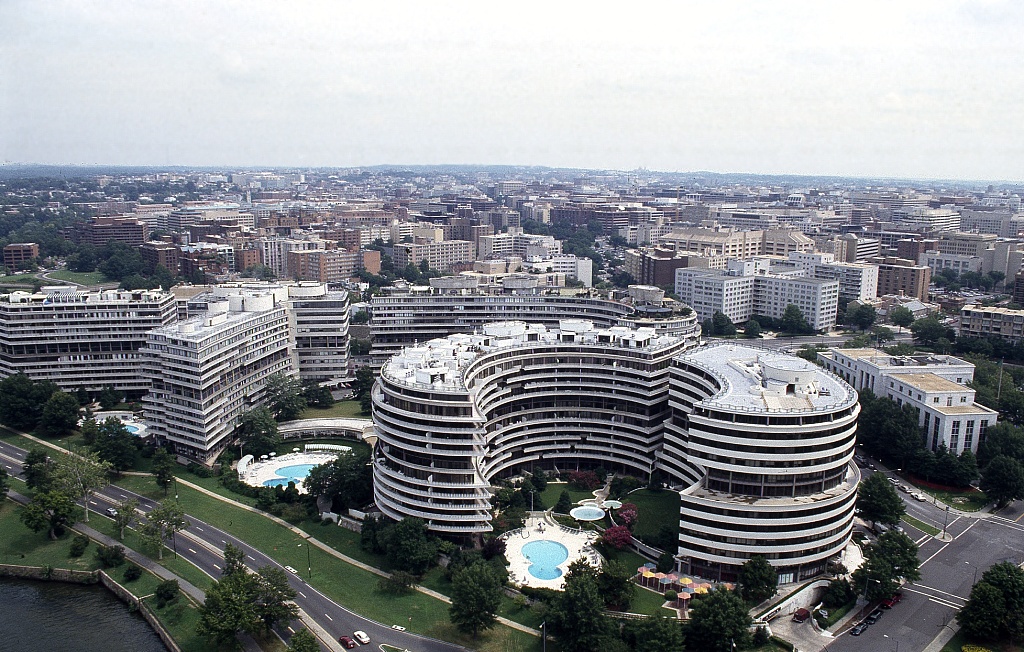 The Watergate affair (or the Watergate scandal or Watergate only) is a scandal that erupted in the United States after the Democratic Party's headquarters at the Watergate complex in Washington, D.C. in 1972, workers from the apparatus of Republican President Richard Nixon broke violently. They were tasked with placing a wiretap in the building. Carl Bernstein and Bob Woodward, reporters for The Washington Post, began writing about the event, winning the Pulitzer Prize in 1973 for their reporting. The case led to the resignation of the President of the USA and is still considered the biggest case in the history of journalism. The name of the place where this whole case took place, ie the hotel and office complex of six buildings called Watergate, has since become synonymous with the great affair, first in English, then in other languages, including Czech. (The suffix "-gate" is added to the defining name; see, for example, Irangate or Dieselgate and many others.)

On the evening of June 17, 1972, there was first an anonymous phone call from the opposite part of the complex (the almost semicircular Watergate South building) to send maintenance workers across the street, believing that the fuses had probably blown because "there are flashlights." At about the same time, security guard Frank Wills discovered several doors with tapes locked to keep them unlocked. He tore the tapes, but did not report the matter. After an hour, he noticed that the locks had been re-glued, and now Wills called the police. She found five men hiding in offices long-rented by the Democratic Party at the time, more specifically the seat of the party's governing body, the Democratic National Committee (DNC). The detainees were Virgilio González, Bernard Barker, James W. McCord, Jr., Eugenio Martínez and Frank Sturgis. To cover up their true purpose, the men disguised themselves as ordinary robbers. At work, this operational group was called a plumber (English plumber unit) and consisted, among other things, of former CIA agents. All five were charged with robbery and attempted to trap wiretaps. In January 1973, they were found guilty. After extensive investigation, their connection with the Republican Committee for the Re-election of President Nixon has been established. In addition, the investigation revealed a connection between Gordon Liddy (head of White House intelligence under President Nixon) and Howard Hunt (former CIA agent and member of White House intelligence under President Nixon). Both were convicted of conspiracy, burglary and obstruction of the investigation. One of the five convicted robbers, James W. McCord, wrote a letter in March 1973 to Chief Justice J. John Siric. In the letter, he admitted that he had acted under pressure from higher positions, specifically on the orders of former Attorney General and the head of President Nixon's re-election committee, John N. Mitchell. The investigation also showed that on June 17, 1972, this was the second burglary of the Democratic Party's headquarters in the Watergate complex. The first burglary took place on May 28 of the same year.

On August 1, 1972, a check for $ 25,000 was found. The check belonged to one of the robbers and was issued by President Nixon's Re-election Committee. Further investigation revealed that the men had received tens of thousands of US dollars before entering the Watergate building. In total, it was proven that they received $ 89,000 from President Nixon's Re-election Committee. The investigation therefore focused on Committee Treasurer Hugh W. Sloan, who had previously served as Assistant to the White House Commander Harry R. Haldeman. Sloan testified that he issued checks on orders from Deputy Board Director Jeb S. Magruder and CFO Maurice Stans. He later supplemented the resignation by