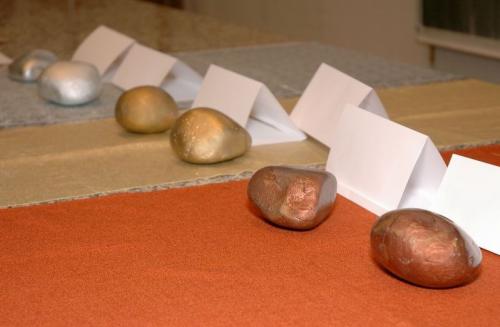 Stray boulder (abbreviated Bl. b. or BlB) is the price or anticena, of the Czech Sisyphus Club of Skeptics, which awards it for pseudoscientific activity. The prize is awarded regularly every year, always for the previous year. The first year took place in 1999. Stray boulders are awarded in individual and team categories. In each year, a maximum of three Stray Stones are awarded in each category, with a different order, ascending from bronze, through silver to the winning gold. On the 10th anniversary of the awards ceremony (in 2007), the club also awarded an exceptional Jubilee Diamond Bludný Archibalvan award.

The award was designed and made by artist Jitka Splítková. These are stones dyed with the appropriate color: bronze, silver and gold. The exception was the jubilee diamond boulders, which were handed over in the form of a bag of soot. When high pressure and temperature are applied, they turn into diamonds.

The Sisyfos Association awards Bludné balvany "for highlighting the contribution of individuals and various associations to the confusion of the Czech public and the development of a muddy way of thinking". Anyone who worked in the Czech Republic in a given year can be nominated, while any member of Sisyphus can propose a candidate. From among the candidates, at least five members of the BlB Awarding Committee will propose awarding awards in a secret ballot. The final decision on the awarding of prizes rests with the executive committee, which also confirms the awarding of prizes in a secret ballot. There is no "appeal or mercy" against the awarding of the prize, only if the laureate wins the Nobel Prize in the future, he is obliged to return the Stray Boulder and the Sisyphus Committee will delete him from the list of laureates.

The presentation of the Stray Boulders usually takes place in the auditorium of the Faculty of Mathematics and Physics of Charles University, previously the award ceremonies took place both at the Faculty of Science of the Charles University and in the building of the Academy of Sciences of the Czech Republic in Prague 1. The ceremony itself is conceived in a recessive spirit. The members of the committee are usually wreathed and dressed in ancient regalia, accompanied by three Graces. Each of the laureates is informed in advance about the awarding of the award and is invited to attend the ceremony, but most of the time they do not show up. After the presentation of the prizes, a recession scene follows.

In his article on the Britské listy server, Aleš Uhlíř criticizes in particular the theatricality of the handing over ceremony, saying that it is not worthy of scientists from research institutes, the Academy of Sciences and scientific councils of universities to stage an already somewhat feeble-minded theater. Journalist and former presidential spokesman Petr Hájek, who received golden Bludný balvan for denying the theory of evolution, called the whole competition something "highly stupid". Biologist Jan Kolář claims that a negative campaign cannot work for the popularization of science for three reasons. First of all, he mentions that by awarding Sisyphus awards, he provides publicity to the awardees in the sense that "even negative publicity is publicity". He also points to the asymmetric situation in the "Sisyphus versus pseudoscience" confrontation, when, according to Kolář, the public does not like it when someone criticizes opponents from a position of official authority. Kolář considers the third shortcoming to be that Sisyphus does not offer a more attractive alternative than that presented by non-scientific schools of thought.

Bearers of the Wandering Boulders