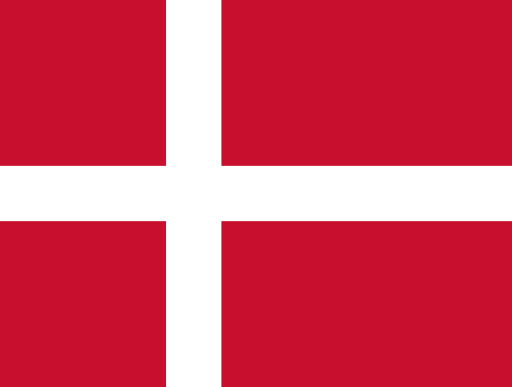 Denmark (Danish) is a country located in Northern Europe. Together with Greenland and the Faroe Islands, they form the Kingdom of Denmark (Kongeriget Danmark). Greenland (the largest island in the world) and the Faroe Islands are territories located in the Atlantic Ocean, they have autonomy, they are not members of the European Union and each of them delegates two representatives to the Danish Parliament (Folketing). The semi-official term Rigsfællesskabet is used for the relationship between mainland Denmark and the two autonomous territories. Denmark without autonomous territories has an area of ​​42,924 km² (however, this area changes slightly over time, due to coastal erosion), with them 2,210,579 km². It is the southernmost of the Nordic states, but it is not located on the Scandinavian peninsula. It consists of the Jutland Peninsula, the islands of Fyn, Sjælland and Bornholm and more than four hundred other smaller islands. Throughout the territory, it has a low altitude and is very flat. It is washed by the Baltic Sea to the east and the North Sea to the west. Its only significant land border is in the south with Germany (68 kilometers), other nearby countries are Poland in the south, Sweden in the north and northeast (with which it is connected by a bridge over the Öresund strait) and Norway in the north. Greenland is close to Canada, with which it shares a short land border (1.2 km) on the uninhabited Hans Island. Since 1849, Denmark has been a constitutional monarchy and a parliamentary democracy. Both the government and parliament are based in the capital, Copenhagen. According to the 2018 census, Denmark has 5.8 million inhabitants (the autonomous territories of Greenland and the Faroe Islands both have around 50 thousand inhabitants). Approximately one third of Danes live in the Copenhagen agglomeration, the capital Copenhagen itself has 600,000 inhabitants. Denmark has been a member of the European Union since 1973, is also part of the Schengen area, but retains its own currency. It is one of the founding members of NATO. He is also a member of the Nordic Council, an important regional cooperation association. Denmark is considered one of the most economically and socially developed countries in the world. According to 2017 International Monetary Fund data, it has the 9th highest gross domestic product (nominal per capita) in the world and the 20th highest in purchasing power parity. According to the Human Development Index, which is calculated by the United Nations, Denmark offers its residents the 11th highest quality of life in the world (2018) and the 9th highest quality according to the so-called adjusted Human Development Index (adjusted for inequalities in society). At the same time, Denmark has the highest total taxation in the ratio of the amount of taxes collected to the gross domestic product in Europe, and therefore also one of the highest in the world (over 47 percent). According to 2011 measurements by the Organization for Economic Co-operation and Development, Denmark has the highest social mobility in the world and the second happiest population on the planet. The World Economic Forum names Denmark the 12th most competitive country in the world. It has the fifth highest quality democracy (2017) according to the index of The Economist magazine. According to Transparency International, it has the lowest level of corruption in the world (2016).

The oldest archaeological finds from Danish territory come from the Eem Interglacial, from 130,000 to 110,000 years BC. Permanent settlement is documented from 12,500 BC and agriculture from 3900 BC. Burial mounds have been preserved from the Bronze Age (1800-600 BC), in which forest horns and the famous Trundholm Sun Chariot have been found. During the Iron Age (500 BC - beginning of AD), Germanic tribes from the north (Jutes) began to migrate to Danish territory. After the beginning of the Common Era, in the Roman period, the Roman provinces maintained trade relations with the native tribes in Denmark, as evidenced by finds of Roman coins. Acha