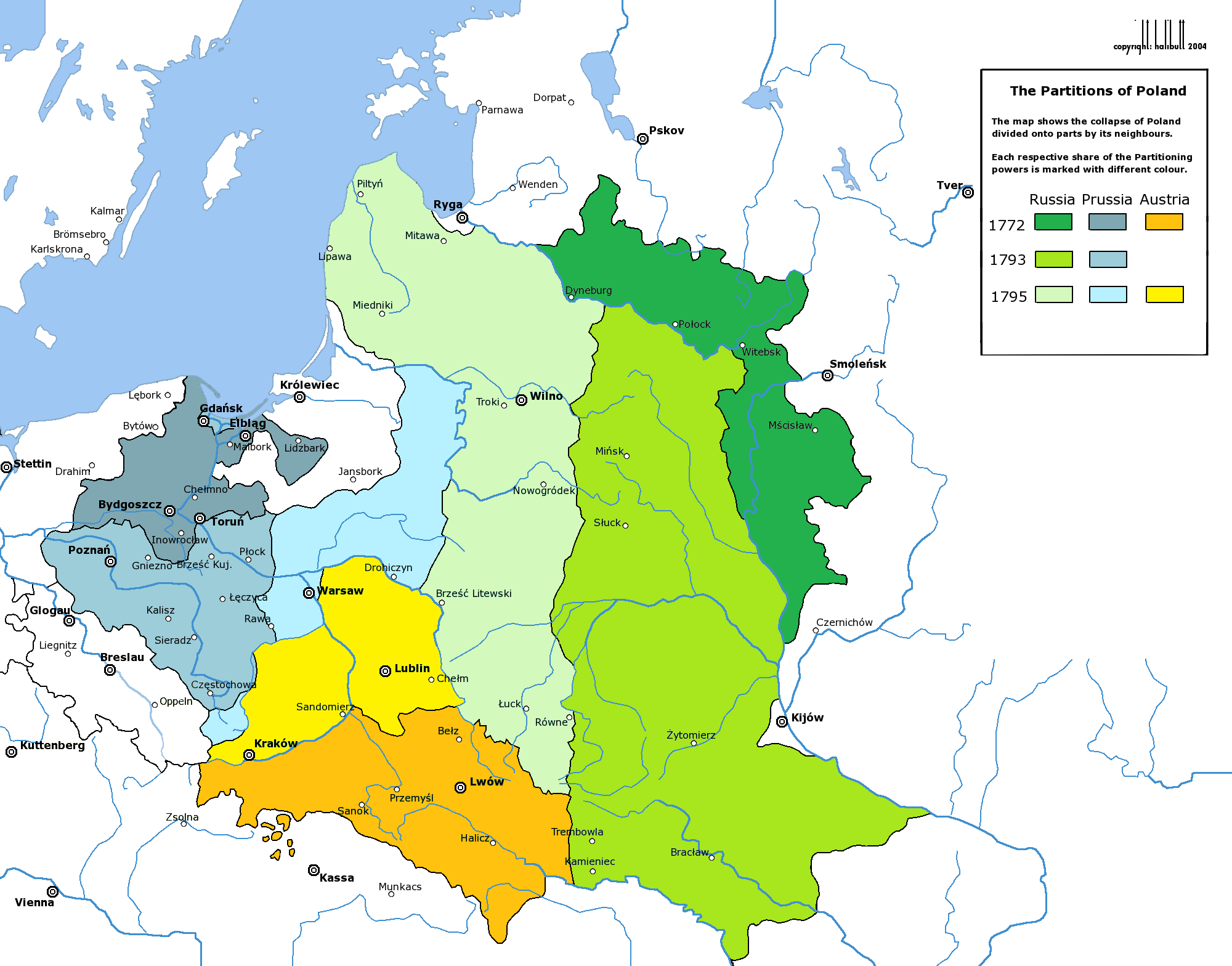 The Partition of Poland or the Triple Partition of Poland is a historical term denoting a series of annexations of the territory of the Polish-Lithuanian Union in 1772, 1793 and 1795. As a result of the partition, this two-state was dissolved and its territory divided between Prussia, Austria and Russia. The division was adjusted in 1815 at the Congress of Vienna, when the so-called Congress Poland was created, personally attached to Russia. Poland and Lithuania were not restored as independent states until 1918 as a result of the First World War. The occupation of Poland by Nazi Germany and the Soviet Union in 1939, which they divided on the basis of a secret amendment to the Ribbentrop–Molotov Pact, is sometimes called the Fourth Partition of Poland.

After a golden age in the 16th and 17th centuries, the Polish-Lithuanian Republic (Rzeczpospolita) went through a period of civil society crisis in the late 17th and early 18th centuries. Poland was a republic (the king was elected instead of the president) and the feuding civil society caused the weakening of the country's governing bodies - the Chamber of Deputies, the Senate and the king. With the election to the Polish throne of the ambitious Saxon Elector Frederick August I the Strong (crowned in Poland as Augustus II the Strong), this process deepened considerably. Society has split into several irreconcilable camps. This situation gradually paralyzed the work of the Polish Chamber of Deputies and the Senate. The ambition of the new king, who wanted to gain military glory and absolute power in the country, dragged the Polish-Lithuanian Republic into the Northern War. During the war, part of society sided with Sweden and the opposition, and part with Russia and the king. Poland did not officially participate in the war, but a large part of the combat operations took place on the territory of Poland. The result of the conflict, during which the Polish Civil War also occurred, was that the country was completely devastated with a huge loss of life, and in particular, the victorious Russia occupied the country militarily with its army. Russia used this situation to politically dominate Poland. Under the threat of military action, Russia forced the reduction of the Polish army to a mere 24,000 troops, effectively turning the Polish-Lithuanian Republic into something that could be called a protectorate. Since that time, Russia has continuously interfered in Poland's internal affairs and usurped the right to become the protector of selected political groups in Poland. The Russian embassy had an influential position in Poland. The subversion of civil society in Poland lasted almost throughout the 18th century. Various noble groups were constantly at war with various groups of magnates and the royal court. Rebellions, rebellions and civil wars inspired by other states often broke out. The pressure of neighboring states, especially expansionist Prussia, to redistribute Polish territory was increasing. Poland had no standing in Europe, because most European countries at that time were absolute monarchies, which resented the fact that the king in Poland had a weak position and that practically everything was decided by the citizens (nobility) through the Chamber of Deputies and the Senate. Due to the stalemate in the Chamber of Deputies and the Senate, Poland's passivity in foreign policy was evident for almost the entire 18th century, which was in its greatest decline during the reign of Augustus III. in the years 1733–1763. Poland did not interfere in important European events and only played the role of a passive agent. Reconciliation of civil society took place only after the shock that occurred after the first partition of Poland in 1772. At this time, the Polish-Lithuanian Republic went through a period of intensive reforms, which, however, caused, �