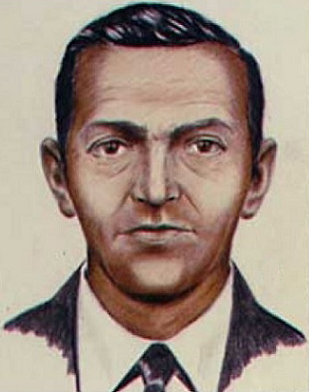 D. B. Cooper is a man who hijacked a Boeing 727 in the United States on November 24, 1971, received a $ 200,000 ransom, and jumped out of the plane in flight. He boarded under the name Dan Cooper, but this name was distorted in communication with the press to D. B. Cooper. Although hundreds of people have been investigated, his true identity is still unknown, whether he had accomplices and whether he survived the jump from the plane. Most of the money paid out as a ransom has never been found. The FBI assumes that he did not survive the jump from the plane. There are several unofficial theories that describe his fate after jumping off a plane. Cooper's unconventional way of escaping and his vague fate still fascinate many. The Cooper case (the FBI gave it the code name "Norjak") remains an unexplained case and is one of the few unexplained hijackings. The Cooper case has been a mystery to both state investigators and private detectives for decades, as dozens of possible clues have always led to a dead end. A major turning point in the investigation was imminent in March 2008, when children in Amboy, Washington, near Cooper's landslide site, found a parachute. However, later analyzes showed that it was not Cooper's parachute. Over the years, several tracks have been found. At the end of 1978, a poster was found in the Cooper Jump area instructing him to open the stern door of a Boeing 727, and it was later confirmed that he came from a hijacked plane. In February 1980, eight-year-old Brian Ingram found $ 5,880 in $ 20 bills on the banks of the Columbia River. In October 2007, the FBI said it had obtained a partial sample of Cooper's DNA from his tie he had left on a hijacked plane. On December 31, 2007, the FBI opened a case of publishing unpublished drawings and information to refresh potential witnesses' memory and provide evidence that could lead to Cooper's identification. The FBI said in a press release that it said Cooper had not survived the jump, but expressed interest in revealing his true identity.

On Wednesday, November 24, 1971, the day before Thanksgiving, a man traveling under the name Dan Cooper boarded a Boeing 727-200 from Northwest Orient (now Northwest Airlines) on flight 305 (FAA Reg. N467US) from Portland International Airport (PDX). ) in Portland, Oregon to Seattle, Washington. According to witnesses, Cooper was about forty-five years old and was 1.78 to 1.83 meters tall. He was wearing a black coat, loafers, a dark suit, a white-collar shirt, a black tie, black sunglasses, and a pearl tie clip. As soon as the plane took off from Portland Airport, Cooper handed the envelope with a message envelope to Florence Schaffner, a flight attendant sitting in a seat attached to the back door of the plane, directly behind Cooper's seat. She thought it was Cooper's phone number, so she immediately put it in her pocket. Cooper leaned over and said, "Miss, I think you should take a look at this message. I have a bomb." There was a message in the envelope: "I have a bomb in my briefcase. I'll use it if necessary. I want you to sit next to me. This is a kidnapping." two main parachutes and two backup. The message said the ransom and parachutes were to be handed over after landing at Seattle-Tacoma International Airport. If the requirements were not met, Cooper threatened to detonate the bomb. The flight attendant informed pilot William Scott of the situation, who passed the information to the flight control at Seattle-Tacoma airport and she contacted the FBI. The FBI has teamed up with Northwest Airlines and its director, Donald Nyrop, has ordered Scott to work with Cooper. Scott instructed the flight attendant to return to Cooper and try to find out if there were any bombs