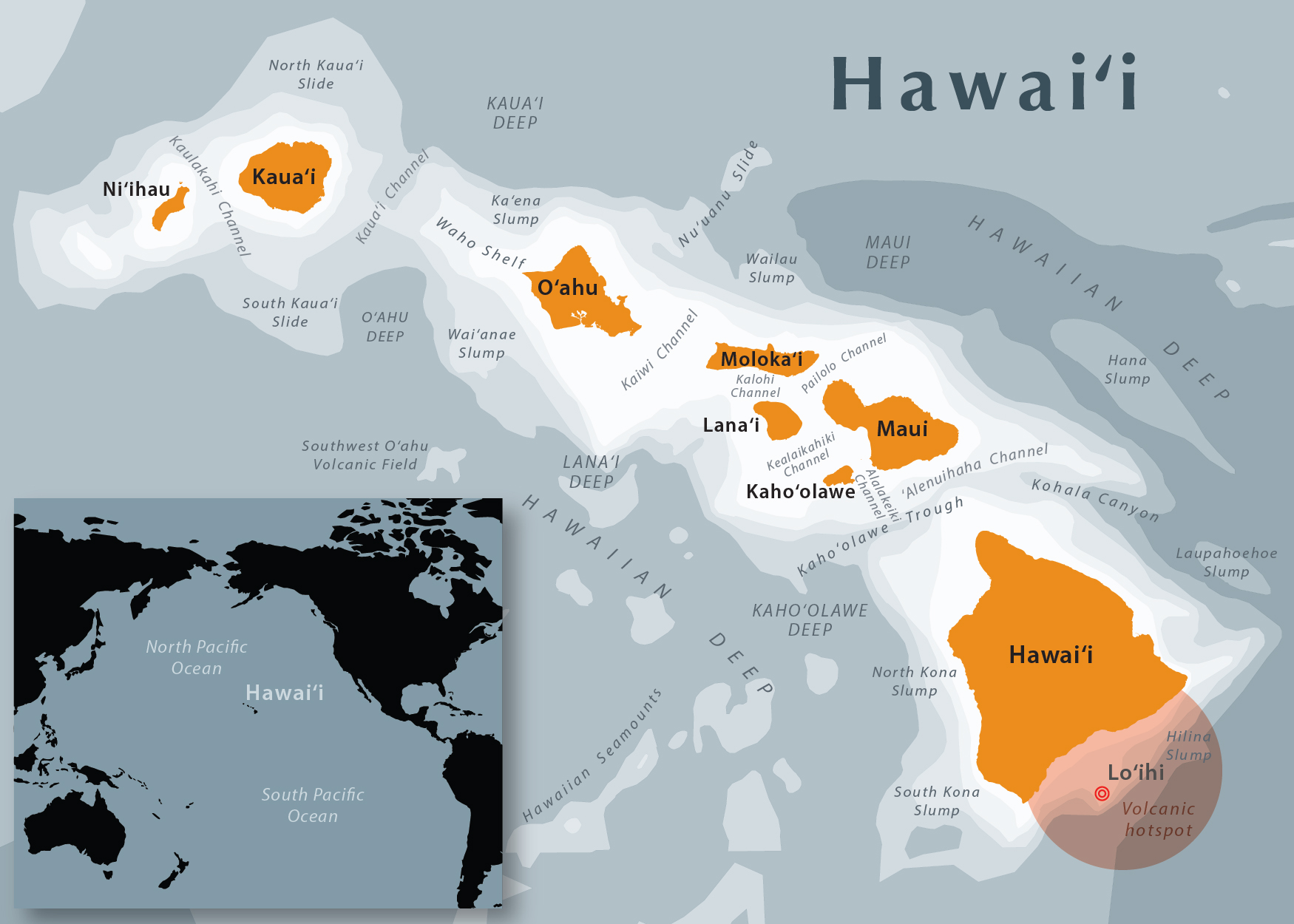 The Hawaiian Islands is an archipelago of 95 coral and volcanic islands and 118 rocks and reefs in the Pacific Ocean, which is the 50th federal state of the United States of America Hawaii with the capital Honolulu on the island of Oahu and the Midway Islands. They lie approximately between 19 ° - 29 ° north latitude and 154 ° - 180 ° west longitude. The Hawaiian Islands are the largest archipelago in the world. the Hawaiian Islands themselves, which form the world's highest mountains (measured from the ocean floor).

The archipelago was formed by volcanic activity over an area of ​​weakened earth's mantle, in which there has been a hot spot for about 52 years at a depth of approximately 52 kilometers. The northwestern islands are older because they formed earlier, which is reflected in their degree of eroded surface. Today, volcanic activity has been active for the past 200 years only on the island of Hawaii and on the submarine gable volcano Loihi, which has not yet risen above sea level. The islands are gabled volcanoes that are formed from basaltic lava, which is related to the composition of magma in the hot spot area. The Hawaiian archipelago is made up mainly of gabbro and diabase.

The first inhabitants probably arrived from Marquis and Tahiti perhaps in 2-5. century AD on canoes with a double hull. It is possible that sometime in the 11th century another wave of immigrants came and in the 17th century the Spaniards may have reached the islands. On January 18, 1778, Captain James Cook discovered the islands and named them the "Sandwich Islands" (in honor of the then British Navy Minister, Earl of Sandwich), then other Europeans and Americans began to arrive. all islands. In the years 1815-1817, the German physician and adventurer G. A. Schäffer tried in vain to occupy the two northern islands for the Russian-American trading company, and similarly failed British and French experiments. Nevertheless, the Russian fortress Ekaterina from the middle of the 19th century has been preserved. Europeans have apparently brought new infectious diseases to the islands, killing almost half the population. From 1873, a Flemish priest and missionary, Damien de Veuster, who also died there in 1889, began working among the sick in the leprosarium on Molokaʻi Island. In 2009 he was declared a saint. On February 25, 1843, Lord George Paulet forced the King of Hawaii to surrender under the British Crown, but the occupation was abolished after five months by his commanding officer, and on November 28, 1843, Britain and France recognized the Kingdom of Hawaii as an independent state. Relations with the United States were very good at first, and from 1820 onwards, American missionaries began to come to the islands. The royal family was also baptized. However, American influence continued to grow, and from 1875 duty-free sugar exports were introduced to the United States, which in 1887 took over Pearl Harbor on the island of Oahu. In a coup d'état on January 17, 1893, rebels composed mostly of United States citizens overthrew the Queen of the Kingdom of Hawaii, Liliuokalani. The "Civil Security Committee" seized power and demanded accession to the United States, but US President Grover Cleveland did not agree, and the Republic of Hawaii was proclaimed on July 4, 1894. In 1897, US President William McKinley agreed to the Hawaiian Islands annexation treaty, which was drafted by Congressman Francis Newlands. The Japanese Empire then sent warships to Hawaii to protest the annexation. McKinley signed the resolution on July 7, 1898, and the islands were (illegally, according to opponents) annexed