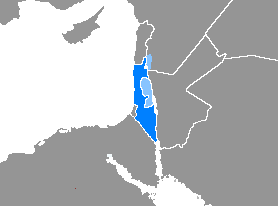 Hebrew (עִבְרִיט‎, Hebrew) refers collectively to all the developmental variants of the Hebrew language, from ancient Hebrew through Biblical Hebrew (עבריט תנ״ך‎ Hebrew Tanach, also לשון קודש‎, leshon kodesh, "holy language") to modern Hebrew (עבריט‎, Hebrew ), which is spoken today in the state of Israel. Hebrew belongs to the family of Semitic languages, or to the Canaanite Northwest Group. The oldest surviving Hebrew texts date from the 10th century BC (the so-called Gezer calendar). In the case of older texts, it is not possible to speak of a full differentiation of Northwest Semitic languages ​​between individual languages ​​or branches, so it is rather a common proto-Semitic or proto-Kenean language.

The term Hebrew is derived from the Greek word 'Εβραϊος (hebrajos), by which the Greeks and Romans sometimes referred to the Jews. The Jews themselves referred to their language as Hebrew (עִבְרִיט‎, literally "language of the Hebrews") or "holy language" (לְשׁוֹן הַקּוֹדֶשׁ‎ leshon ha-kodesh). However, both Hebrew designations are attested only from the Mishnah.

The Hebrew script is used to write down the Hebrew language, the form of which has changed over the course of history. In the period 10.–6. century BC, the so-called paleo-Hebrew script, which was based on the Phoenician script, was used to write Hebrew. However, with the growing influence of Aramaic, Aramaic characters were increasingly used to write Hebrew text, which were adapted to the so-called square script for writing Hebrew. In the further course, other types of Hebrew writing developed, but the square type of writing has retained its privileged position to this day. Hebrew is written from right to left and usually only using the 22 consonants that make up the alphabet. Vowels, accents and possibly other characters do not belong to the alphabet and are used only as an aid to ensure the correct reading of the text, especially in the case of sacred Hebrew texts. Hebrew numerals are a quasi-decimal alphabetic number system using the letters of the Hebrew alphabet. The system was adapted from Greek numerals in the late 2nd century BC.

Among the oldest and most important Hebrew written monuments from the time of the Kingdom of Israel and Judah are the so-called Gezer Calendar (10th century BC), the Samaritan Ostraka (approx. 8th century BC), the Shiloh Inscription (approx. 700 BC ) or the Lachish ostraka from Lachish and Tel Arad (roughly from the time just before the fall of Jerusalem in 586 BC). Compared to biblical Hebrew, these texts have a simpler form, there are almost no letters serving as bases for vowels (so-called defective writing, e.g. צר versus צור (rock), אש versus יש (man)). These inscriptions also do not contain later diphthongized forms (ין jn versus יין jajin, wine), on the contrary, in the Gezer calendar there is a rare form of a dual form in the construct state ending in -o (ירחו jarcho, two months). Also, these inscriptions contain some words that do not appear in biblical Hebrew.

Biblical Hebrew is the oldest written form of the Hebrew language. Compared to previous texts, the biblical text is characterized by an increased use of the sounds alef, yod, vav and he as bases for vowels, often these bases are used to lengthen them (which is a phenomenon that also occurs, for example, in Arabic). At the same time, thanks to the long time during which the texts that make up the canon of the Hebrew Bible were created, it is possible to follow the development in the writing of various words, towards simpler and more usual variants (replacing the letter sin with the letter samech, replacing the more complex form