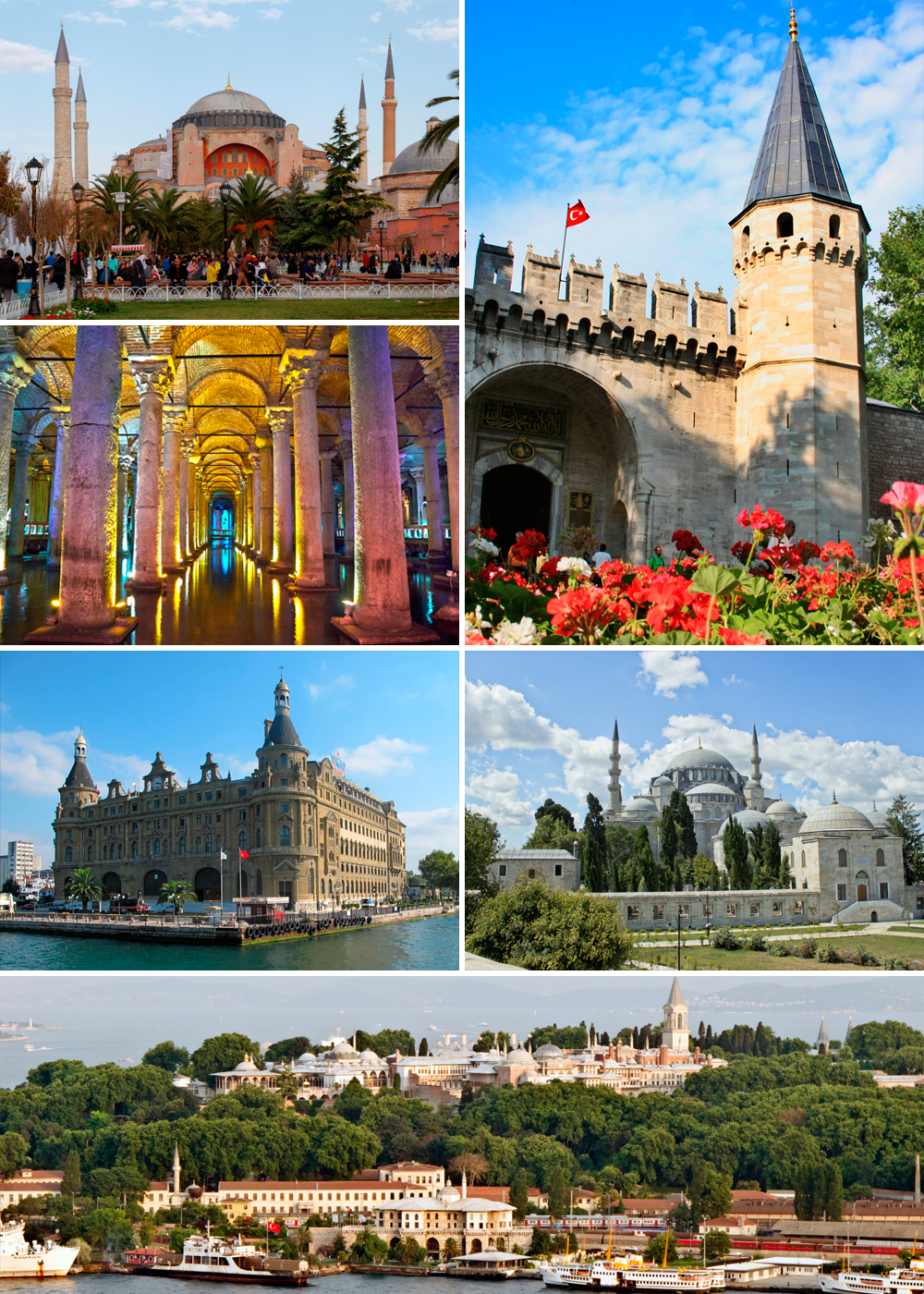 Istanbul, formerly Constantinople (Turkish İstanbul from Greek εἰς τῆν πόλιν eis tén polin - in the 15th century pronounced is tin polin - "to the City", until the 20s of the 20th century also Ḳosṭanṭīnīye) is a Turkish city on both sides of the Bosphorus Strait. In 2021, over 15.8 million inhabitants lived here, making it the largest Turkish city. Already in the days of the Byzantine Empire, Constantinople, its capital, was an important trade crossroads and gateway to the Orient. In the Slavic environment, the name Constantinople was also used for Constantinople from the 9th century (in different transcriptions depending on the language).

Character of the city

Istanbul is famous above all as a city that straddles two continents. It went down in history under different names: Byzantium, Constantinople or Constantinople. Both continents are connected and at the same time divided by the Bosphorus Strait. In the European part, there are most important monuments from the times of the Byzantine Empire, as well as the historic center of the city, originally from the times of the Roman Empire. The Bosphorus is a strategic strait, heavily used for transport. Her name means "The one with the narrow throat". The depth of this strait is 118 meters, and it is 31.5 kilometers long. This sea route connects the Black Sea with the Sea of ​​Marmara. According to Greek mythology, the Argonauts were the first to cross the Bosphorus in search of the Golden Fleece. Approximately 20 kilometers south of Istanbul is the North Anatolian Fault, a lithospheric interface with frequent occurrence of earthquakes of varying strength and destruction.

The city's rich history dates back to ancient times; the city originated as a small settlement of Byzantion. In 330, Emperor Constantine I the Great promoted Byzantium to the capital of the eastern part of the Roman Empire. It was first named Nova Roma (New Rome), but Constantine soon changed his mind and renamed it after himself, as Constantinople or Constantinople. The city became the center of Greek culture and later of the Orthodox Church. A lot of important church buildings were created, the most famous of which is Hagia Sofia, in its time the largest building of its kind in the world. Later in 1204, Constantinople was sacked by the troops of the Fourth Crusade. Istanbul, like Constantinople, was the main center of all trade and culture during the Byzantine Empire, and remained so even after the Ottoman conquest. They moved their capital here, previously located in Asia Minor, and began to spread Islam, which was very foreign to them at that time. Today's name of the city - Istanbul - has spread among ordinary Turks. However, until 1930, the city was officially called Kostantiniyye, and foreign countries still referred to the city as Constantinople. It was not until 1930 that the city was officially renamed Istanbul and it was decided that letters addressed to Constantinople would be shredded. New mosques were built (the Blue Mosque, the Tulip Mosque, the Suleiman Mosque, the Hagia Sofia Cathedral was also rebuilt into a mosque). The large number of very richly decorated temples from the Ottoman period is a remnant of the rule according to which each monarch built his own mosque in his honor. Merchants from conquered territories, for example from Greece, Serbia, Bulgaria or Armenia, settled here; Istanbul thus acquired a cosmopolitan character. By the end of the 19th century, it was already a modern city of a million people with an underground and tramway, rail connections to Europe were a matter of course. As the Ottoman Empire gradually weakened, there was an increasing threat that Istanbul would be occupied by foreign troops. Russia was explicitly interested in acquiring the metropolis of the former Byzantium, which considered it an ideological and power goal; the gain of this city would not only fulfill the goals of a number of pan-Slavists, but from a strategic point of view, Russia would be able to control the only link between the Black and Mediterranean seas. Western powers during the division of Europe�