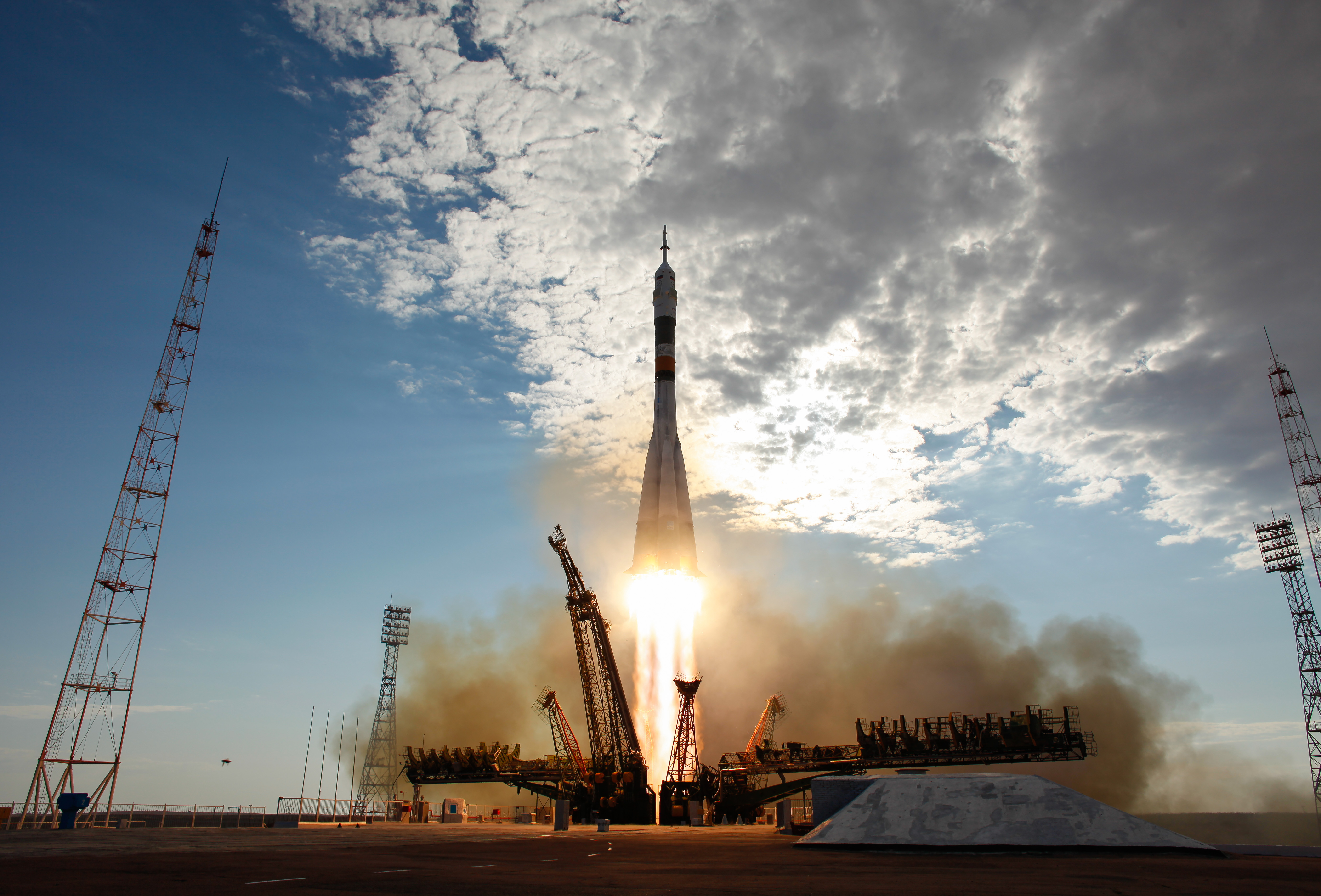 The Baikonur Cosmodrome (Kazakh Байқоңыр ғарыш айлағы, Bayqoñır ğarış aylağı; Russian Космодром Байконур) is a spaceport (base for space rocket launches) in Kazakhstan, used by the Soviet Union and later by the Soviet Union. All Soviet and Russian manned Vostok, Voschod and Soyuz spacecraft and Progress unmanned spacecraft supplying the International Space Station are and have been launched from the spaceport. Stationary telecommunications satellites, probes to the moon and probes to the planets, and part of the Earth's scientific, applied and military artificial satellites are launched. Different types of launchers have been or are being used for this purpose; at present (2017) especially various modifications of the Soyuz, Proton and Zenit types.

The spaceport was built in the Kyzylord and Karaganda regions of the Kazakh SSR (now the Republic of Kazakhstan) between the headquarters of Kazala and Žosaly on the basis of the USSR Government Decision No. 292-181 of 12 February 1955 as the 5th Scientific , 5й Научно-исследовательский испытательный полигон, 5-НИИП) USSR Ministry of Defense for ballistic missile tests. Until then, a military shooting range (now Kosmodrom Kapustin Jar) was used for missile experiments, which was not enough for Korolyov's multi-stage missile experiments. Therefore, the artillery marshal Mitrofan Nědělin decided to build a larger base. The construction of the new base was taken over by General Engineer Maximovich Subnikov. He got to the future construction site with his first collaborators on January 12, 1955. Railway wagons served as their workshops and dwellings. The organizational structure of the military shooting range administration was established by a directive of the General Staff of the USSR Armed Forces of June 2, 1955; this day was later officially marked by the order of the Minister of Defense of the USSR No. 00105 of August 3, 1960 as the date of establishment of the spaceport. The administration of the spaceport was entrusted to the RVSN missile troops (Raketnyje vojska strategicheskogo markenija, Raketnyy voyska stratagesske namesti), later ramps for space carriers administered by the VKS (Military-Cosmic-Soviet, The first successful launch of a ballistic missile from the spaceport took place on August 3, 1957. Since October 4, 1957, when the first artificial satellite, the Earth Sputnik 1, was launched from there, it has also been used for space launches. In the Western press, it was often called Tjura-Tam after a nearby railway station. The original village of Baikonur (Kazakh Baikyr) lies about 320 km northeast of the spaceport; its name was used for the spaceport to hide its true location. The official birthday of the Baikonur Cosmodrome is set for June 2, 1955, when the Fifth Research and Testing Area was established by order of the General Staff and the training center was created - military unit 11284. At the beginning of training and discharge, 527 engineers and 237 technicians military personnel were 3600 people.

The Tjura-Tam missile spaceport was one of the strictly guarded and secret places. In 1956, its construction was proved by images from the American spy plane U-2, but the coordinates of the Soviets were kept secret. After Gagarin's flight, the USSR applied to the International Air Federation (FAI) for recognition of the record flight and stated that it took off from the Baikonur Cosmodrome. Only the village of Baikonur was drawn on a map of the area, otherwise there was a penal camp, so the Soviets decided to list the distant village as the rocket launch site. During the visit of French President Char