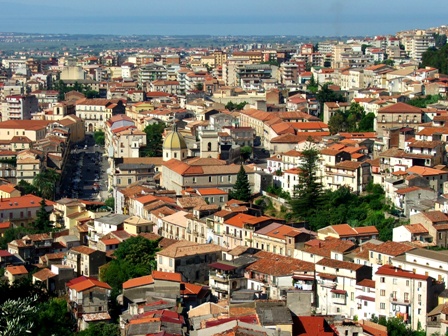 Lamezia Terme is an Italian town in Calabria, its 3rd largest city. It lies on the shores of the Tyrrhenian Sea. The city was created by merging two separate cities, the smaller Sambias in the northern part and the larger Nicastro, which forms the center of Lamezia. The original Lamezia is only a small part of the mountains. It is located on the shores of the Tyrrhenian Sea in the Gulf of Sant'Eufemia Lamezia in the steep Apennine depression, which means that parts of the city lie in the mountains and part directly by the sea. The A2 / E45 motorway (Salerno-Reggio Calabria) crosses the town. Lamezia Airport is also the gateway to Calabria for many tourists. In the part of Nicastro there is a castle ruin (it is closed to tourists), which was part of the "protection zone" (a chain of fortresses and castles in the north-south direction). In addition to the mountains and the sea, the town's surroundings are full of vineyards, olive groves and greenhouses for growing fruit and vegetables. Both parts of the city have the character of ancient settlements, which gradually grow into one whole thanks to new construction, which has been taking place here permanently since the 1960s. The ancient streets of the city are often very insensitively rehabilitated at the expense of new, not architecturally interesting buildings. The main shopping street leads from the railway station towards the mountains and ends at the foot of Nicastro Castle, it is quite extensive, with many shops and restaurants. Important monuments include numerous churches, the old town hall or the theater. Numerous palaces still stand in the Sambias section. There is considerable rivalry between the inhabitants of both parts of the city. It is also worth mentioning the part of the old town of Lamezia, which with its winding streets rising into the mountains, forms an incredible and even picturesque nooks. However, for the locals, it is only old Lamezia, which is impractical for everyday life. However, a very interesting destination for tourists.

Pictures, sounds or videos about Lamezia Terme on Wikimedia Commons Official site History of the town