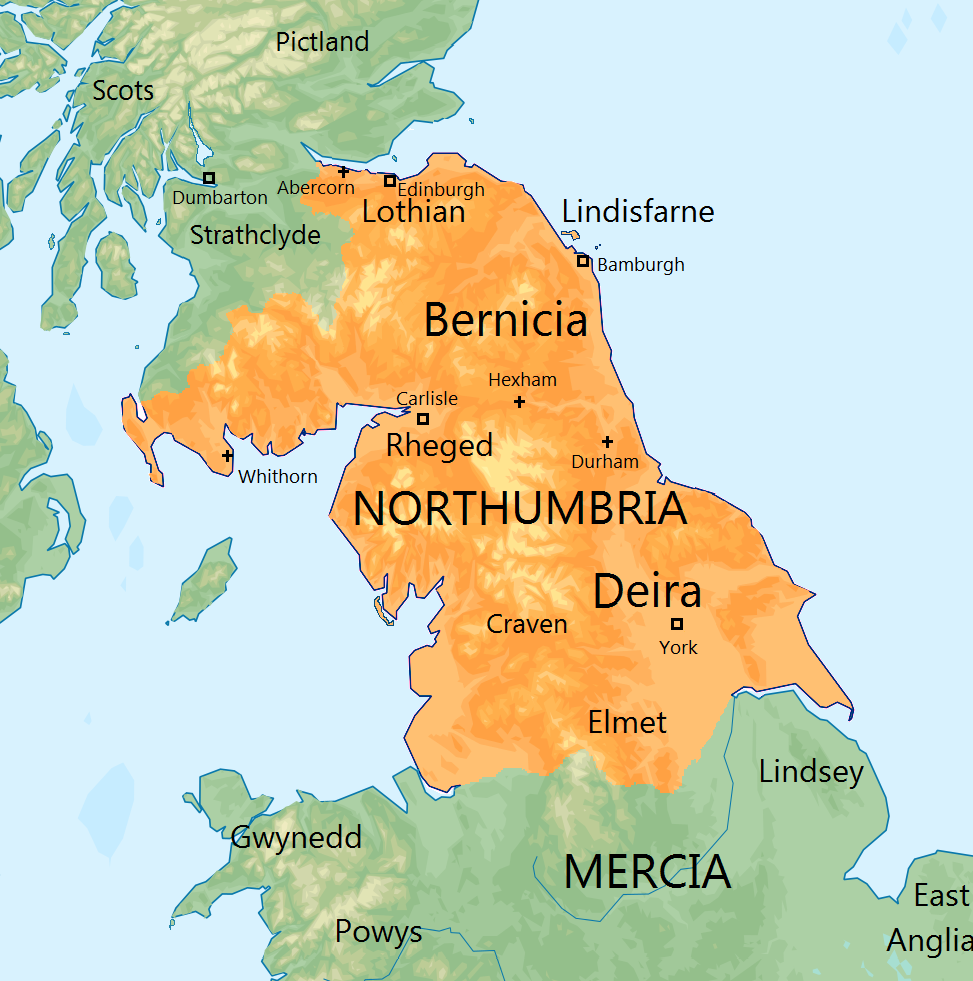 Northumbria (Old English Norþanhymbra Rīċe, Latin Regnum Northanhymbrorum) was one of the seven Anglo-Saxon kingdoms, located in present-day northern England and southern Scotland, later also one of the counties of the United Kingdom of England after 927. The name refers to the location of the country lying "to the north of (the estuary of) the Humber"; it remained preserved in the successor county of Northumberland, which was already much smaller in terms of territory.

The Rise of a Kingdom

Northumbria was formed by the merger of the two original independent kingdoms of Bernicia and Deira. Bernicia extended over the territory north of the River Tees to the Firth of Forth. Deira covered roughly the area of ​​present-day Yorkshire. The two were first united by Æthelfrith, king of Bernicia, who conquered Deira in about 604. In 616 he was defeated and killed at the Battle of the River Idle by Rædwald, ruler of East Anglia, who installed Edwin, son of the previous ruler of Deira Ælla, as king. Edwin converted to Christianity in 627 and became the most powerful king of Anglo-Saxon England. He conquered the Isle of Man and Gwynedd in North Wales. But he was defeated in 633 by the combined army of Cadwallon, King of Gwynedd, and Penda, King of Mercia, in the Battle of Hatfield Chase.

After Edwin's defeat, Northumbria was divided into Bernicia, where Eanfirth ruled, and Deira, where Osric became king. Both of these kings were killed in battles with Cadwallon, who continued to conquer the original Northumbria territory. After Eanfith's death, his brother Oswald defeated and killed Cadwallon in 634 at the Battle of Heavenfield. Oswald then significantly expanded the territory he controlled. He conquered the territory at the mouth of the River Forth inhabited by the Gododdins, as well as the kingdoms west of Northumbria - Rheged and Strathclyde. This expanded the territory of Northumbria from the region of present-day northern England to present-day southern Scotland. To spread Christianity in his kingdom, Oswald invited the Irish monk St. Aidan. A famous monastery was also founded on the island of Lindisfarne at that time. The war with Mercia continued. In 642 Oswald was killed at the Battle of Maserfield by the Mercian army led by Penda. In 655 Penda, supported by the King of Deir, launched a massive attack on Northumbria, but was defeated by forces led by Oswald's successor Oswia at the Battle of Winwaed. This battle turned the balance of power. Penda fell in battle and Oswiu gained control of Mercia, becoming the most powerful king in Anglo-Saxon England.

Northumbria lost control of Mercia around 650 after a successful rebellion led by Penda's son Wulfher, but maintained its dominance until its disastrous defeat by the Picts in 685 at the Battle of Nechtansmere. The Northumbrian king Ecgfrith (Oswi's son) was killed and the rule over the northern part was greatly weakened. From then on, Northumbria's influence declined, and after the death of Aldfrith in 704, a period of instability ensued. In 867, Northumbria became part of the Danelaw. Although the Vikings plundered the kingdom, their arrival meant a noticeable development of trade, especially in the area around the city of York.

William I the Conqueror became King of England in 1066. He realized that he had to gain control of Northumbria, which was partially independent of the previous English kings, to protect England from Scots raids. To maintain this protection, he won over the Bishop of Durham and the Earl of Northumbria to his side. However, an anti-Norman rebellion broke out in Northumbria. William decided to appoint his man Robert Comin as administrator of Northumbria, but before he could take office, he and 700 men were killed in Durham. William decided on bloody revenge and set out with his army for Northumbria. Rebellions in Northumbria continued even later, and William's son William II. Red decided to split.