Covid-19 pandemic in the Czech Republic 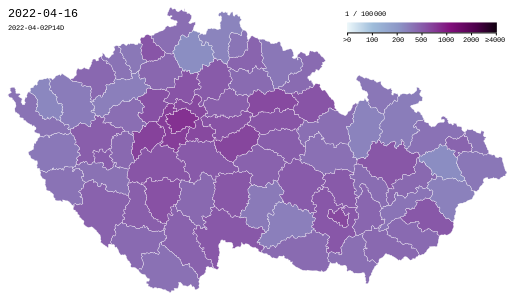 Northern Italy, where many Czechs went skiing, was mentioned as the primary main source of infection. The rapid onset of the epidemic was marked by a critical lack of protective equipment, of which there were few warehouses. This created a number of initiatives and people began to sew protective equipment themselves. The first measures against the epidemic were taken by the state on March 3, and on March 10, it was announced at a press conference after the government meeting that the schools would be closed from the following day (March 11). On 12 March, a state of emergency was declared with a number of restrictions for citizens and businesses (eg a ban on entry for citizens from high-risk countries or pubs closes at 8 pm, clubs and gyms close completely), and on 14 March restaurants were closed and other establishments outside the most important ones. With a few exceptions, the state borders were closed on 16 March. On March 16, 2020, the first three patients recovered, and by April 5, 96 of those who had originally contracted had a negative test. On the evening of March 22, 2020, the Czech authorities announced the first death of a 95-year-old man hospitalized in Prague's Na Bulovce Hospital in the Czech Republic, a patient with covid-19 coronavirus. The man was ill for a long time (chronic heart problems, he had a pacemaker). According to the doctor, he died of total exhaustion of organ reserves. The man's covid-19 was confirmed on March 18. The first death of medical personnel was announced on March 29; she was a 48-year-old nurse from Thomayer Hospital in Prague, who became infected from one of the first patients with covid-19. of which 436 were hospitalized, including about a hundred patients who were in serious condition. After that, the number of recovered began to outweigh the number of newly infected, and the number of hospitalized also decreased. The number of people in the Czech Republic with a positive test for covid-19 stabilized at 2,000–2,500 during May and June 2020. The number of infected and sick began to increase again during the summer of 2020, a significant outbreak of the disease (per capita) was the capital city of Prague, frequently visited by foreign tourists. In the last weeks of July and the first week of August, the incidence of the disease spread to almost the entire republic. The fastest number of those infected continued to be in Prague and also in Frýdek-Místek, Brno and Karviná. However, in contrast to the spring culmination, there was no similar increase in hospitalizations; the spread of the disease among the younger population contributed to this. In response to the re-spread of the infection, the affected regions were marked with so-called traffic lights. At the end of August, 106 outbreaks of infection were counted. In the first week of September 2020, the Czech Republic ranked among the worst affected countries in Europe in terms of the number of newly infected per million inhabitants. On 8 September 2020, the number of newly detected cases exceeded 1,000 for the first time. The daily increase of more than 2,000 people was recorded for the first time on 16 September. House