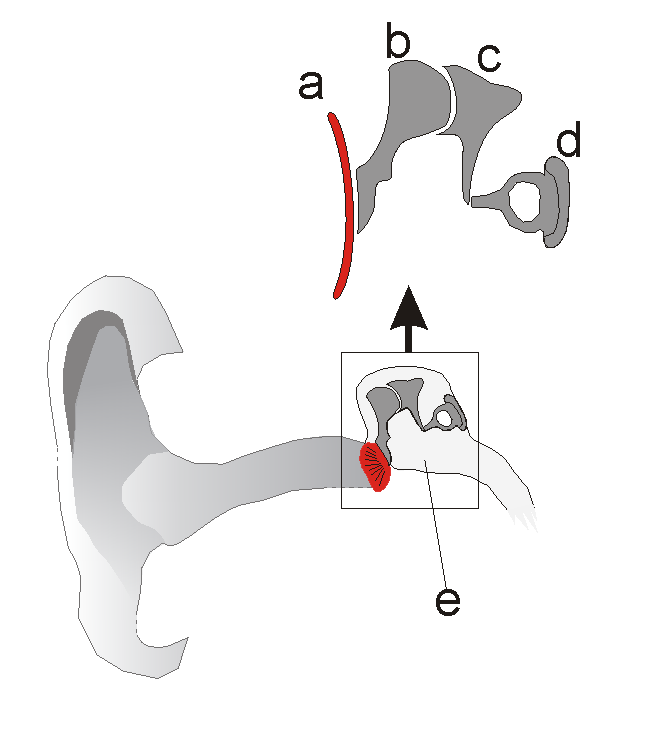 Auditory bones (Latin: ossicula auditus) The bones of the middle ear or ear bones are three bones - a hammer (malleus), an anvil (incus) and a stirrup (stapes) - placed in the middle ear cavity in the mammalian tympanic cavity (cavum tympani) and connected to the tympanic membrane . The hammer and anvil belong to the mandibular, the stirrup to the hyoid arch. The chain of these bones transmits sound from the eardrum to the inner ear - the stirrup plate touches the oval window in the inner ear.

The middle ear bones were formed by the transformation of parts of the original gill arches, which lost their meaning after the vertebrates crossed to land, but were preserved in certain variations (at least in the embryonic stage). The stirrup originates from a hyomandibular (a structure originating in the hyoidic arch), a hammer from Meckel's cartilage (which is a structure from the ventral part of the mandibular arch) and an anvil from a structure called the palatoquadratum (which originates in the dorsal part of the mandibular arch).

In this article, a translation of the text from the article Hearing Cubes on the Slovak Wikipedia was used.