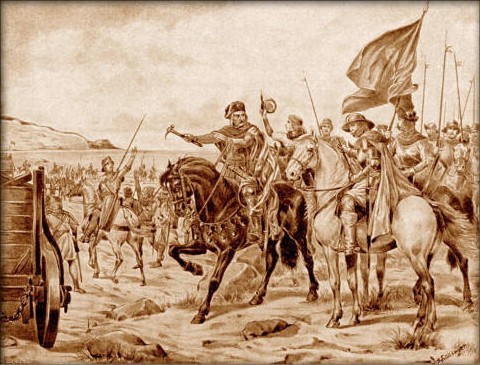 Spanil cavalry, in the terminology of the recess of the time, were large military campaigns of the Hussites beyond the borders of the Czech Kingdom. These expeditions became part of the new tactics of the Hussite groups from about the mid-1920s, fully from 1427, and combined military, economic, political and promotional considerations. The most frequent destinations of sleepy cavalry were the neighboring countries of the Czech Crown (Moravia, Silesia, both Lusatia), the German part of the Empire (Austria, Bavaria, Saxony) and Poland, the territory of the Teutonic Knights and Upper Hungary. The expeditions performed several functions: invade Hussite enemies in their own territories, provide the loot and finances that were necessary to sustain the permanent field troops and help alleviate the manifestations of serious economic difficulties in the Czech lands, destroyed by long wars, expressed the efforts of the Hussites to acquire all the crown lands for the four articles of Prague and thus restore the integrity of the Czech constituency (this did not succeed, however, the result was quite the opposite), helped to spread Hussite ideas by introducing the local population to their program (this was, after all, the announced goal of the rejs). In order to facilitate these incursions abroad, the Hussites established their support in the surrounding countries body. The peak period of sleepy rides falls mainly into the years 1427–1433. The leading Hussite commanders at that time were the priest Prokop Holý and Jan Čapek from Sán.

After the Hussites managed to repel the invasion of the troops of the First and Second Crusades, their power in Bohemia was significantly strengthened. The country was basically dominated by Hussite alliances, which gained a significant advantage over Czech Catholics and gradually went on the offensive.

The first serious expedition of Czech Hussites outside Bohemia was the march of Praguers and Orebits to Moravia in June and July 1423. The Hussites led by Bedřich of Strážnice and Diviš Bořek of Miletínek dispersed the army of Bishop Jan XII of Olomouc. Duke of Železný and Opava of Přemysl and controlled a number of towns in Central Moravia. Jan Žižka of Trocnov defeated and united the disputed Hussite factions in several battles, after which a large joint campaign to Moravia against Albrecht of Habsburg was agreed on 14 September 1424 in Prague. On October 11, at the very beginning of the expedition, however, the leading Hussite governor Jan Žižka died before the besieged Přibyslaví. After the dead commander, Jan Hvězda from Vícemilice, Bohuslav from Švamberk and Zikmund Korybutovič took over the leadership of the expedition. By the end of November, the Hussites had seized several towns, fortresses and monasteries in western Moravia, after which they returned to Bohemia. A year later, the camps and orphans set out for Austria. During the siege of Retz, the Hussite commander Bohuslav of Švamberk, who died after being transported to Moravský Krumlov, was mortally wounded. After his death, the priest Prokop Holý became the head of the Tábor union. In the spring of 1426, the Hussites conquered Břeclav and a number of other towns during their expedition to South Moravia.

In the spring of 1427, campers and orphans under the leadership of Prokop Holý set out on a campaign to Lower Austria. On March 14, they defeated the army of the Austrian Duke Albrecht of Habsburg at the Battle of Zwettl. This victory foreshadowed a period of supreme power of field troops. In May 1427, the orphan camps went to Silesia and Upper Lusatia. They did not have much success, they just burned down a few monasteries.

At the beginning of 1428, camps with orphans, Praguers and Moravian Hussites set out on a joint expedition. Prokop Holý once again took the lead in this sleepy ride. The Kaliszs headed from Moravia