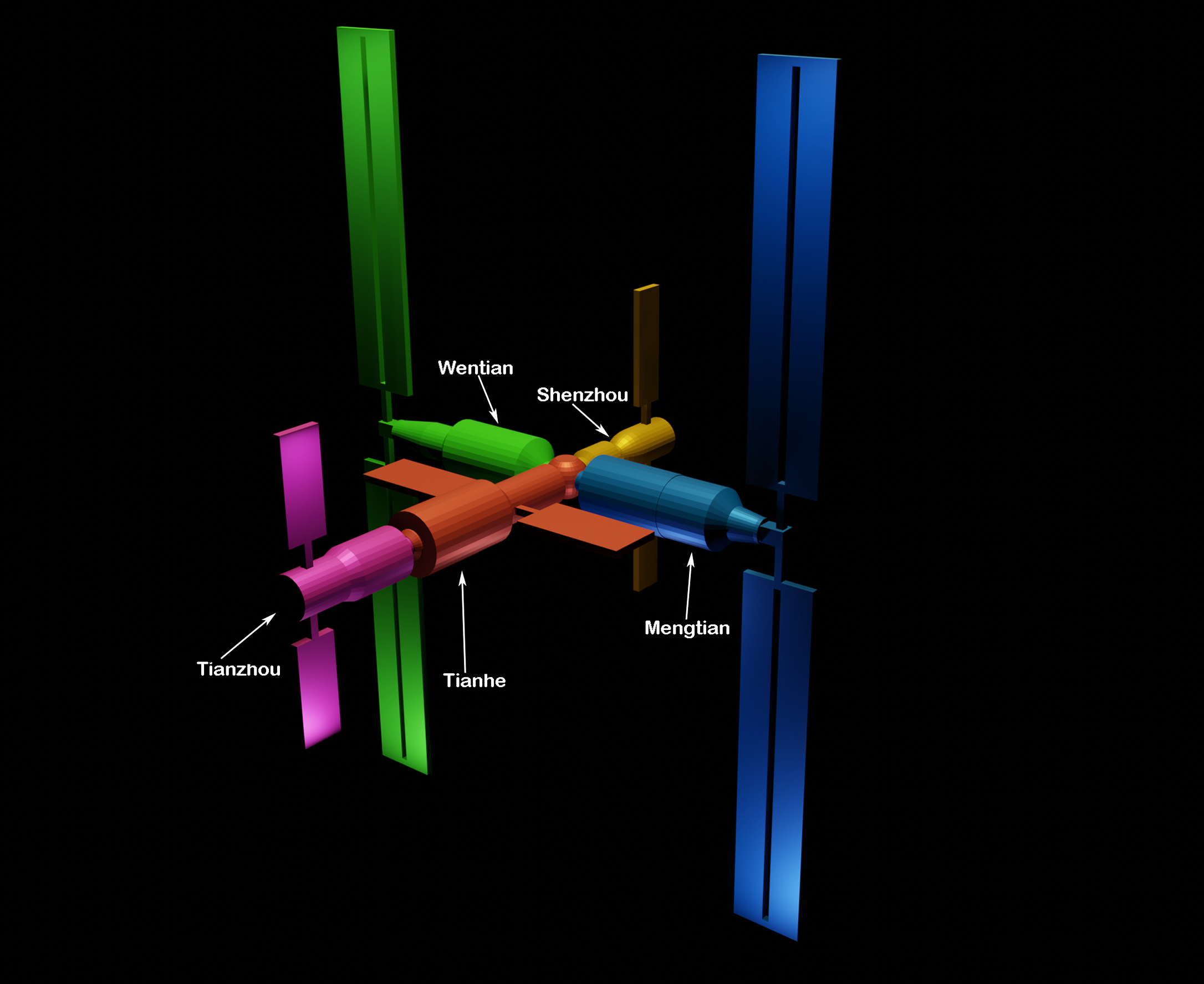 The Tiangong Space Station (Chinese: Zhōngguó kōngjiānzhàn, characters: 天宫号空间站; Czech: Heavenly Palace; English transcription: Tiangong Space Station, TSS) is a Chinese space station located in low Earth orbit at an altitude of 340–450 km above the surface. When completed, it will have about one-fifth the total weight (80 to 100 tons) of the International Space Station (over 400 tons) and will be similar in size to Russia's former Mir space station. The construction of the station is the third phase of the Tiankung program, building on the experience gained by Chinese scientists, engineers and cosmonauts during the flights of the previous Tiankung 1 and Tiankung 2 stations. The originally planned launch of the Tiankung 3 station was canceled in 2017, stating that China is already moving ahead with the construction of a large orbital station.

TSS is a third-generation modular space station (under construction). First-generation space stations, such as the first Salyut or Skylab stations, were one-piece and not intended for continuous resupply. The second generation stations Salyut 6 and 7 and Tien Kung 1 and 2 allowed resupply during crew stays. Third-generation stations such as Mir, the International Space Station (ISS) or just TSS, are modular space stations, assembled in orbit from separately launched parts, which can significantly increase reliability, reduce costs, shorten the development cycle and meet the diverse requirements for the purpose of the modules. In addition to the basic Tianche module, the Tiankung space station will also consist of two laboratory modules and a space telescope flying separately but simultaneously. In 2011, the construction of the station was expected to take place between 2020 and 2022. After gradual refinement, it was announced in January 2021 that the launch of the main module of Tchien-che, the first supply mission and the ship with the first crew would take place in the same year. The estimate of the necessary launches of autonomous and piloted ships for the entire construction phase reaches 10 to 12. Station operations are controlled from the Beijing Aerospace Command and Control Center.

The basic module Tchien-che (Chinese pinyin Tiānhé, characters 天和; Czech Harmonie nebes; English transliteration: Tianhe) was launched into orbit on April 29, 2021. The module provides life support and living quarters for three crew members. In addition, it provides power to the station, its guidance, navigation, orientation control and propulsion. The module consists of three sections: residential, service and docking. The living area contains a kitchen and toilets, fire control equipment, atmosphere processing and control equipment, computers, scientific instruments, communication equipment for transmitting and receiving communications through Beijing ground control, and other equipment. The Wen-tchien Laboratory Module (Chinese Pinyin Wèn Tiān, characters 問天; Czech Hledání nebes; English transliteration: Wentian) was launched and attached to the station on July 24, 2022. In its living section, it provides 50 cubic meters of additional space for the cosmonauts on board the station of interior space including 3 sleeping spaces and a new toilet. It also significantly expands the possibilities of carrying out scientific experiments, focused especially on life science research in space, both in the pressurized environment inside the station and on its outer surface. The module is currently located on the forward port of the station, from where it will be transferred to the right side port of the station during the summer of 2022 by its robotic arm. The robotic arm has two segments (longer on the Tchien-che module, shorter on the Wen-tchien module) with an adapter to connect them. The combination of these three parts has a sufficient range due to its length of about 14.5 meters to cover all three main modules throughout