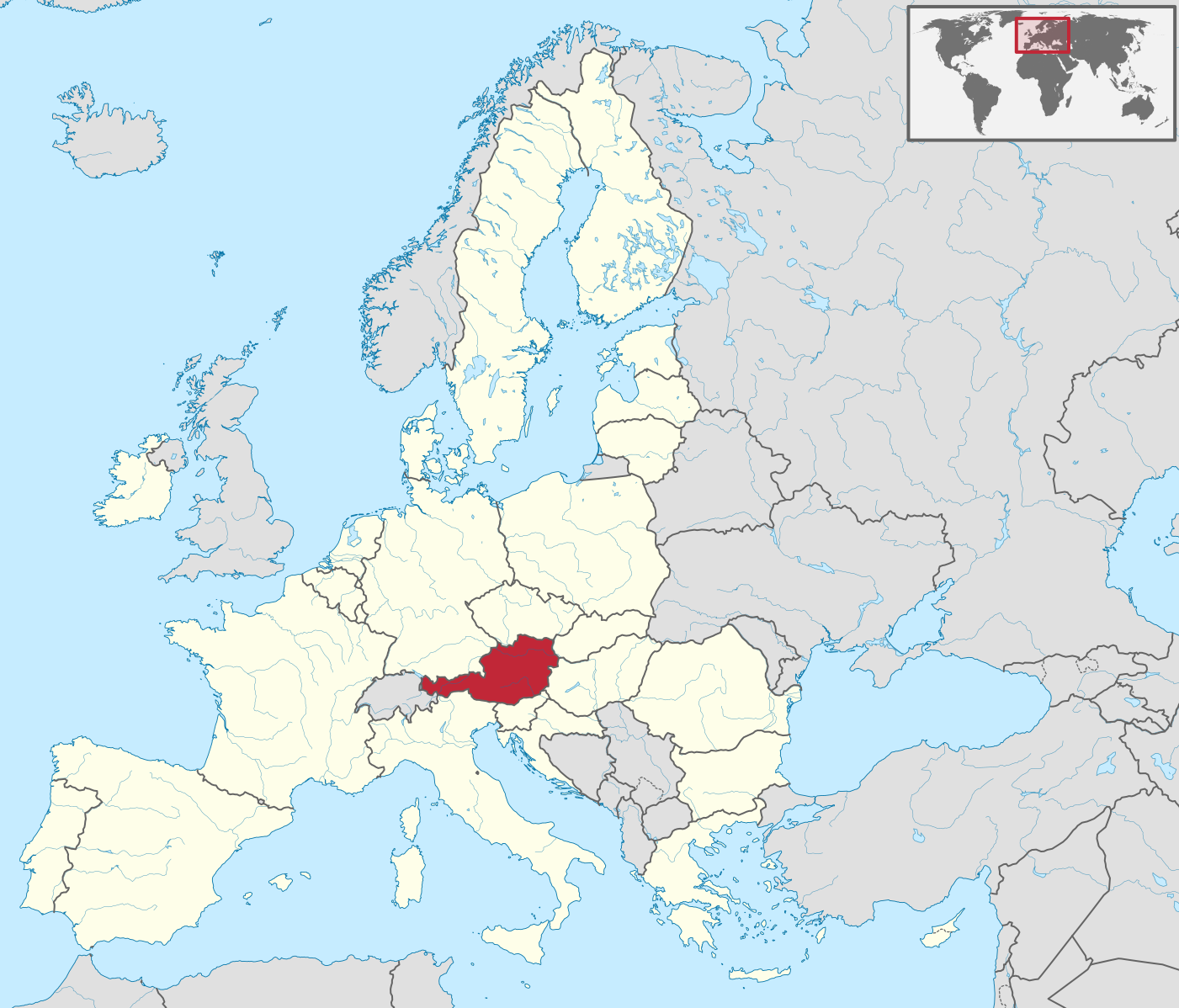 Austria ([ˈøːstɐʁaɪ̯ç]; officially the Republic of Austria) is a central European landlocked country with around 8.9 million inhabitants. The neighboring countries are Germany and the Czech Republic in the north, Slovakia and Hungary in the east, Slovenia and Italy in the south, and Switzerland and Liechtenstein in the west. Austria is a democratic and federal state, in particular a semi-presidential republic. Its nine federal states, most of which emerged from the historic crown lands, are Burgenland, Carinthia, Lower Austria, Upper Austria, Salzburg, Styria, Tyrol, Vorarlberg and Vienna. The federal state of Vienna is both the federal capital and the most populous city in the state. Further population centers are Graz, Linz, Salzburg and Innsbruck. The country is bordered by the Bohemian Massif and the Thaya in the north, the Karawanken and the Styrian hill country in the south, the Pannonian Plain in the east and the Rhine and Lake Constance in the west. More than 62 percent of its national territory is made up of high alpine mountains. The name Austria is first handed down in its Old High German form Ostarrichi from the year 996. In addition, the Latin name Austria was in use from the early Middle Ages. Originally a border mark of the tribal duchy of Baiern, Austria was elevated to an independent duchy in the Holy Roman Empire in 1156. After the Babenbergs died out in 1246, the House of Habsburg prevailed in the struggle for rule in Austria. The area designated as Austria later included the entire Habsburg Monarchy and subsequently the Austrian Empire, which was constituted in 1804, and the Austrian half of the Austro-Hungarian Dual Monarchy established in 1867. Today's republic emerged from 1918, after Austria-Hungary lost the First World War, from the German-speaking parts of the monarchy, initially known as German-Austria. With the Treaty of Saint-Germain, the state border and the name Republic of Austria were established. This was accompanied by the loss of South Tyrol. The First Republic was marked by internal political tensions, which culminated in a civil war and the corporate state dictatorship. As a result of the so-called "Anschluss", the country was under National Socialist rule from 1938. After the defeat of the German Reich in World War II, Austria became an independent state again. At the end of the Allied occupation in 1955, Austria declared its permanent neutrality and joined the United Nations. Austria has been a member of the Council of Europe since 1956, a founding member of the Organization for Economic Cooperation and Development (OECD) established in 1961 and a member state of the European Union since 1995.

Austria extends in a west-east direction over a maximum of 575 kilometers, in a north-south over 294 km. The five major landscapes of Austria are: the Eastern Alps (52,600 km², 62.8% of the national area), the foothills of the Alps and the Carpathian Mountains (9,500 km², 11.3%), the foreland in the east, peripheral area of ​​the Pannonian lowlands (9,500 km², 11.3%), the granite and gneiss plateau, low mountain range of the Bohemian Massif (8,500 km², 10.2%) and the Vienna Basin (3,700 km², 4.4%). More than 70% of the national territory is mountainous and mostly has a share in the Eastern Alps, which extend further into the mountain ranges of the Tyrolean Central Alps, the High and Low Tauern, the Northern and Southern Limestone Alps as well as the Wienerwald can be subdivided. That is why the country is also known colloquially as the Alpine republic. North of the Danube in Upper and Lower Austria lies the granite and gneiss plateau, part of the old rump mountains of the Bohemian Massif, the foothills of which extend to the Czech Republic and Bavaria. Beyond the eastern border, the Little Carpathians connect. The large plains are in the east