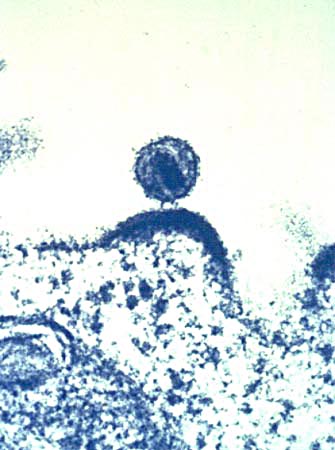 AIDS [ɛɪ̯t͡s] (acronym for acquired immune deficiency syndrome “acquired immune deficiency syndrome”) refers to a specific combination of symptoms that occur in humans as a result of the destruction of the immune system caused by an HIV infection. The sick develop life-threatening opportunistic infections and tumors. AIDS was recognized as AIDS by the US Centers for Disease Control and Prevention (CDC) on December 1, 1981, after defining the coincidence of certain symptoms as AIDS. AIDS is one of the sexually transmitted diseases. According to the United Nations Joint Program for HIV / AIDS (UNAIDS), there were around 37.9 million HIV-positive people worldwide in 2019. In 2019 there were around 1.7 million new HIV infections (4,650 per day) and around 0.77 million people died as a result of HIV / AIDS. 35 million people have died of AIDS since the epidemic began. The proportion of people infected with HIV is around 0.8% of 15 to 49 year olds on average worldwide, but in some African countries it is around 25%. No vaccination is available. The more effective treatment of HIV-infected people with new drugs has made AIDS less common in Central Europe.

Classification in the ICD-10

In the world-wide recognized medical diagnosis classification system ICD-10 of the WHO, both the HIV infection and numerous diseases as a consequence of an HIV infection can be coded. The exact type of secondary illness is coded in a fourth digit in the version of the ICD-10 last updated by the World Health Organization for 2013, for example: B20.6 Pneumocystis pneumonia as a result of HIV disease.

Classification of HIV infection and definition of AIDS

According to the case definitions of the US Centers for Disease Control and Prevention (CDC), a confirmed positive HIV test is considered evidence of HIV infection. The rating of HIV infection by severity, including AIDS, was changed significantly in 2008. Until then, clinical findings and laboratory values ​​were classified separately and presented as letter-number coding. Asymptomatic and HIV-related but not AIDS-defining diseases were also included. Since 2008 only AIDS-defining diseases have been taken into account. The classification according to the number of CD4-positive T lymphocytes (T helper cells) and the list of AIDS-defining diseases, however, remained unchanged. The letter-digit coding, which is still widespread in practice, is therefore out of date. It should be noted that the case definition is primarily used for epidemiological monitoring of HIV and AIDS and not as a guide for clinical diagnosis. A case classification cannot be downgraded again; therefore it may not say anything about the current status of a patient. AIDS is considered to be evidence of HIV infection and an AIDS-defining disease (stage 3) or evidence of HIV infection and a CD4 cell count of <200 cells or <14%. AIDS-defining diseases / symptoms were determined by the CDC to be: Candidiasis (fungal infection) of the bronchi, windpipe, or lungs Oesophageal candidiasis (fungal infection of the esophagus) CMV infections (except liver, spleen, lymph nodes) CMV retinitis (inflammation of the retina with loss of vision) Encephalopathy, related to HIV Herpes simplex infections: chronic ulcers (lasting> one month; or bronchitis, pneumonia, esophagitis) Histoplasmosis, disseminated or extrapulmonary Isosporiasis, chronic, intestinal, lasting more than a month Kaposi's sarcoma Coccidioidomycosis, disseminated or extrapulmonary Cryptococcosis,