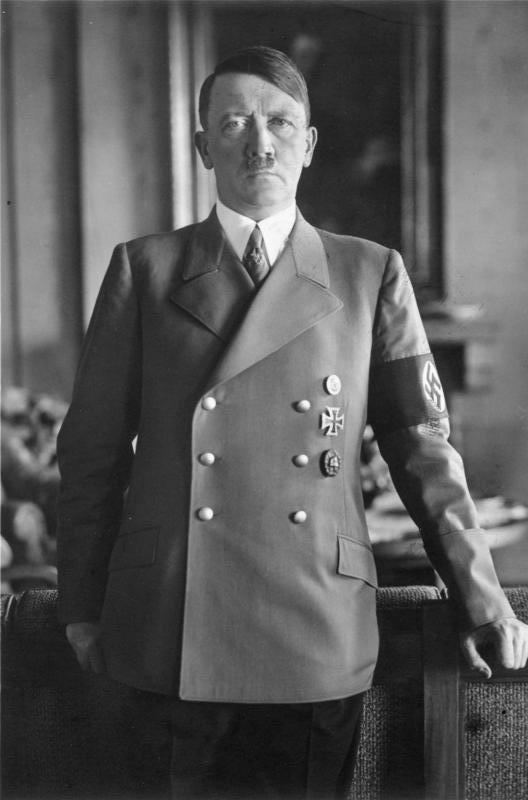 Adolf Hitler (April 20, 1889 in Braunau am Inn, Austria-Hungary – April 30, 1945 in Berlin) was a Nazi German politician of Austrian origin who was the dictator of the German Reich from 1933 until his death in 1945. From July 1921 he was chairman of the National Socialist German Workers' Party (NSDAP). In November 1923 he tried to overthrow the Weimar Republic with a putsch from Munich. With his writing Mein Kampf (1925/26) he shaped the anti-Semitic and racist ideology of National Socialism. Hitler was appointed Chancellor of Germany by Reich President Paul von Hindenburg on January 30, 1933. Within a few months, his regime eliminated the separation of powers, pluralistic democracy, federalism and the rule of law with terror, emergency decrees, the Enabling Act, Synchronization Acts, bans on organizations and parties. Political opponents were imprisoned in concentration camps, tortured and murdered. In 1934, on the occasion of the "Röhm Putsch", Hitler had potential rivals in his own ranks murdered. Hindenburg's death on August 2, 1934 was used to combine the office of Reich President with that of Reich Chancellor, and he has ruled as "Führer and Reich Chancellor" ever since. From 1933 onwards, German Jews were increasingly marginalized and disenfranchised, particularly as a result of the Nuremberg Laws of September 15, 1935, the November pogroms of 1938 and the Aryanization of Jewish-owned companies, as well as numerous other laws and ordinances that gradually restricted their participation in economic, cultural and social life made life impossible and deprived them of their wealth and employment opportunities. He fought the consequences of the global economic crisis and mass unemployment with state investment programs and job creation measures such as the construction of the autobahn and the rearmament of the Wehrmacht, as well as the establishment of the paramilitary Reich Labor Service. With the rearmament of the Wehrmacht and the occupation of the Rhineland, Hitler broke the Versailles Treaty in 1936. The National Socialist propaganda portrayed the economic, social and foreign policies as successful and thus increased Hitler's popularity until 1939. In 1938 he assumed direct command of the Wehrmacht and enforced the “Annexation” of Austria. On March 15, 1939, he defied the Munich Agreement of September 30, 1938, which allowed him to annex the Sudetenland to the German Reich, by “smashing the rest of the Czech Republic”. With the conclusion of the so-called Hitler-Stalin Pact of 23./24. The attack on Poland on September 1, 1939, which was prepared with the Soviet Union on August 1, 1939 and which, in accordance with the treaty, aimed at the destruction of the Polish state and the division of its territory among the contracting parties, and which was soon followed by the Soviet occupation of eastern Poland, triggered the Second World War in Europe out. After the victory over France in the western campaign from May 10 to June 25, 1940 and the beginning of the later failed air battle over Britain on July 10, 1940, he informed representatives of the Wehrmacht High Command on July 31, 1940 of his decision to attack the Soviet Union and to wage a war of annihilation against them to conquer "living space in the East". He had the war against the Soviet Union, which began on June 22, 1941, prepared and conducted under the code name "Operation Barbarossa". During World War II, the National Socialists and their accomplices committed numerous mass crimes and genocides. As early as the summer of 1939, Hitler gave instructions to prepare for “adult euthanasia”. Between September 1939 and August 1941, more than 70,000 mentally ill and mentally and physically handicapped people were euthanized in “Action T4” until the end of the war