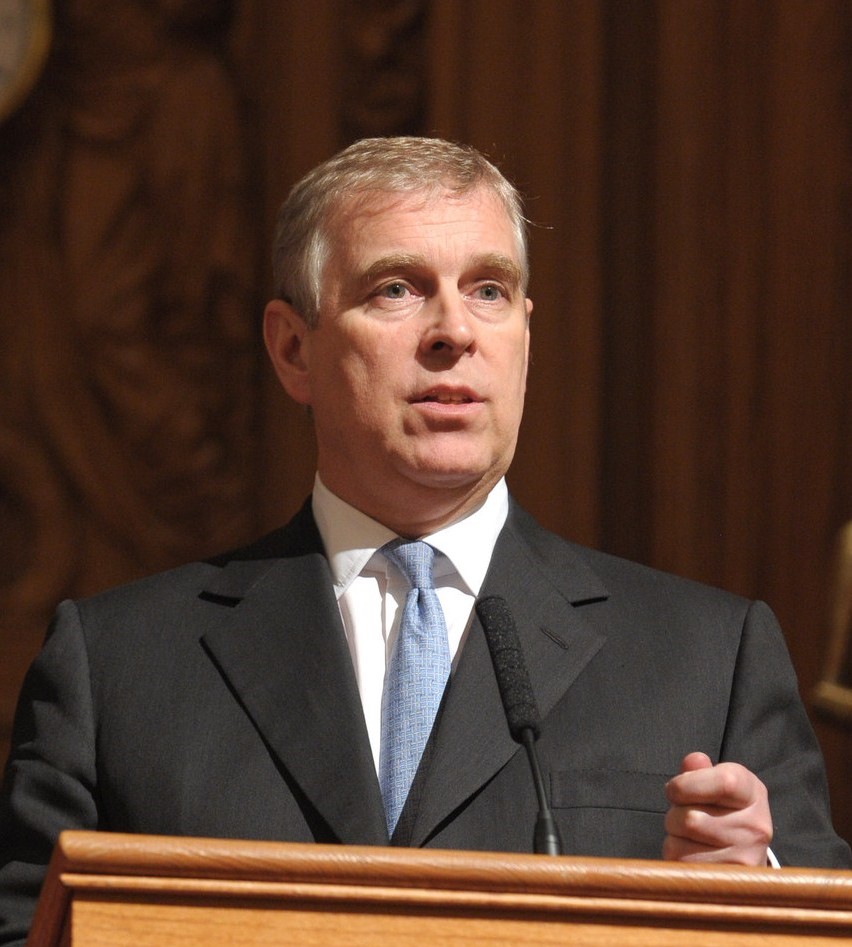 Andrew Albert Christian Edward, Duke of York, known as Prince Andrew (born February 19, 1960 in Buckingham Palace, London), is the third child and second son of Britain's Queen Elizabeth II and her husband Prince Philip. He served in the Royal Navy and took part in the 1982 Falklands War. He is ninth in line to the British throne. The Queen bestowed the title of Duke of York on him in 1986 when he married Sarah Ferguson. In 1996 the marriage was divorced. Because of possible connections between Andrews and the sex offender Jeffrey Epstein (1953-2019), it was announced in May 2020 that Andrew no longer represents the royal family. On January 13, 2022, he relinquished all patronage and all honorary military titles "with the permission and consent of the Queen" as part of the New York-legal impeachment.

The prince was the first child born to a reigning British monarch since the birth of Princess Beatrice of Great Britain and Ireland (1857-1944). His two older siblings, Charles and Anne, were born before their mother's accession to the throne. He was named after his paternal grandfather Andrew of Greece. From his birth he was titled His Royal Highness The Prince Andrew. Until the birth of Prince William in 1982, he was second in line to the British throne, behind his brother Charles. Prince Andrew was initially raised by private tutors and then attended Heatherdown Preparatory School near Ascot, Berkshire. In 1973 he went to Gordonstoun Private School in Morayshire, Scotland, which his father and brother Charles had attended. After graduating in 1979, Andrew decided against going to university and enlisted in the Royal Navy.

Andrew trained as a Sea King helicopter pilot in the Royal Navy and as such took part in combat operations of the Falklands War aboard the aircraft carrier HMS Invincible in 1982. The Thatcher government initially wanted to withdraw Andrew from the ship and give him other duties, fearing the death of one of the Queen's sons. However, they insisted that Andrew remain on board the Invincible. After the war, Andrew continued his training on other helicopter models. In 1984 he was promoted to lieutenant; his mother appointed him her personal aide-de-camp. In the following years he served as a fighter pilot and commander of a minesweeper. At the end of his military career he worked in the Ministry of Defense. Andrew retired from active service in the Royal Navy in 2001 with the rank of Commander. As a reserve officer, he was promoted to Honorary Captain in 2005 and to Rear Admiral in 2010. He has received numerous honorary military titles and royal patronages including Colonel in the Grenadier Guards, Colonel-in-Chief of the Small Arms School Corps, Royal Colonel of the Royal Regiment of Scotland, Honorary Air Commodore of Royal Air Force Base Lossiemouth, Commodore-in -Chief of the Fleet Air Arm and Admiral of the Sea Cadet Corps. In mid-January 2022, Queen Elizabeth II withdrew all of these honorary military titles and royal patronage from her son Andrew, who was sued for abuse allegations in the United States.