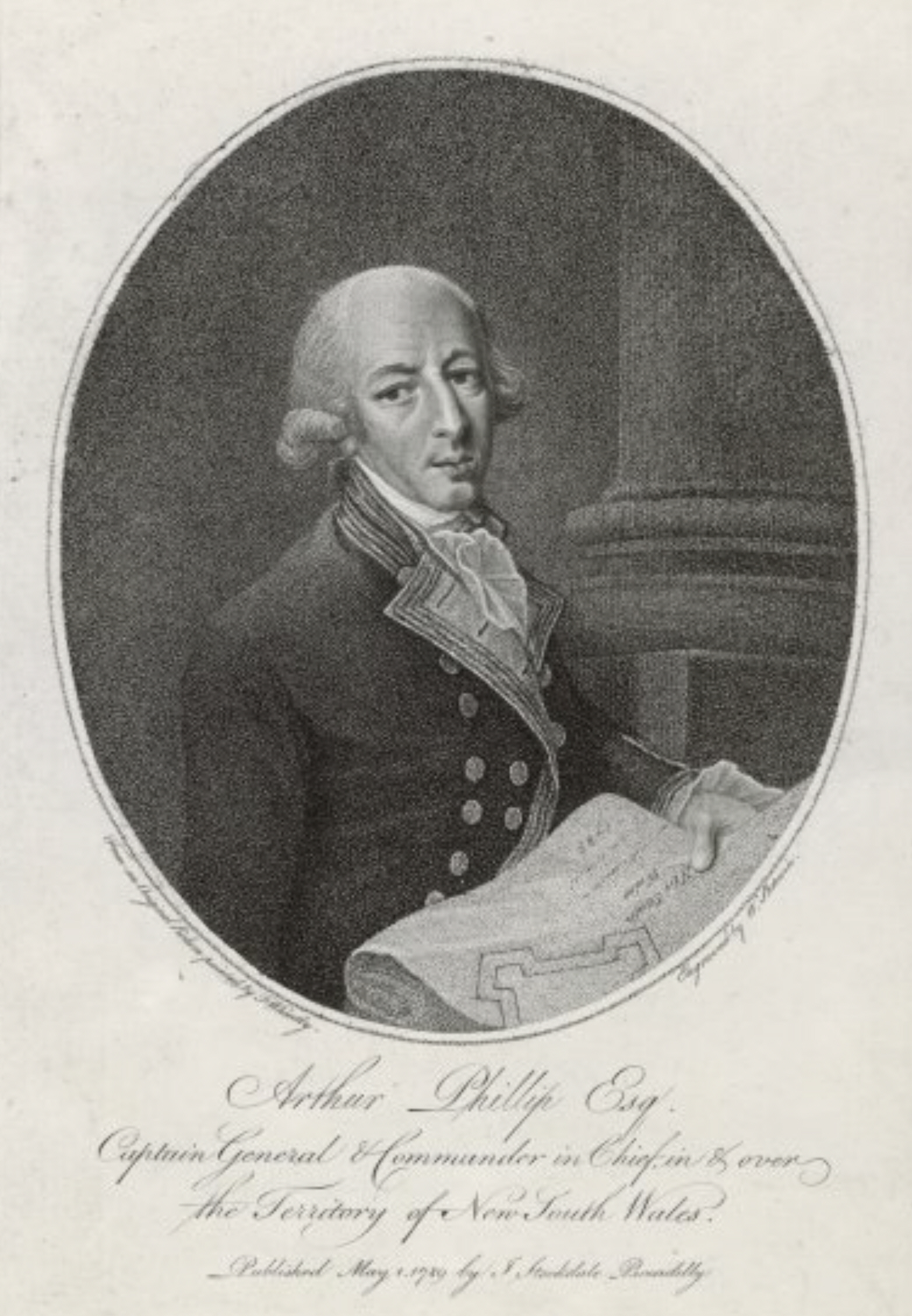 Arthur Phillip (October 11, 1738 – August 31, 1814 Bath, Somerset) was a British naval officer and the first Governor of New South Wales. The son of a Frankfurt bookseller and an Englishwoman joined the Royal Navy at the age of 17. He is considered to be the actual discoverer of Port Jackson, the harbor bay of today's Australian metropolis Sydney, which James Cook gave it its name without having explored it himself. At the end of the Seven Years' War (1756-1763), Phillip resigned from the British Navy and tried his hand at farming, which eventually failed. From 1774 to 1778 he entered the service of the Portuguese crown with the permission of the British Admiralty. For the Portuguese Navy he carried out the first deportations overseas. At the beginning of the American Revolutionary War (1775-1783) he was called back to England. After losing its 13 colonies in North America to US independence, the British government considered where to transport the many convicts. Before that they had been taken to America. Remembering James Cook's expedition, the Admiralty chose Australia as their prison site. In 1786 Phillip was put in charge of the preparations. In May 1787, eleven ships, known as the First Fleet, sailed to Botany Bay (south of present-day Sydney). When the fleet anchored there in January 1788, Phillip and his officers found it unsuitable for settling due to the lack of fresh water supplies. So it was decided to follow the coast further north. During a three-day exploration tour of Port Jackson, Captain Arthur Phillip first discovered Manly Cove and a day later on the other side of the natural harbor another bay, which he named Sydney Cove after the then British Home and Colonial Secretary Thomas Townsend Sydney. On January 26, 1788, he decided that this bay was the most suitable place for the "First Fleet" to anchor. While passing through Port Jackson, Philipp said that the "... best port in the world" had been found. Phillip was governor of the convict colony until 1792. After he left his post, anarchy and chaos reigned until the arrival of the new governor, Lachlan Macquarie, in 1810. During the Napoleonic Wars, in which Phillip was still actively involved, he died an admiral in 1814. Port Phillip Bay off Melbourne and the islands of Phillip Island in Victoria and Phillip Island (Norfolk Islands) are named after him.

Commodore Phillip's Voyage to Botany Bay in New Holland. With a detailed account of the new English branch at Jacksons Port, and a short history and description of New Holland. Publisher of the Observer's Expedition, Stuttgart 1789. Australia. The founding of the penal colony. Edited by Rudolf Plischke. Lamuv, Goettingen 2001, ISBN 3-88977-593-4.