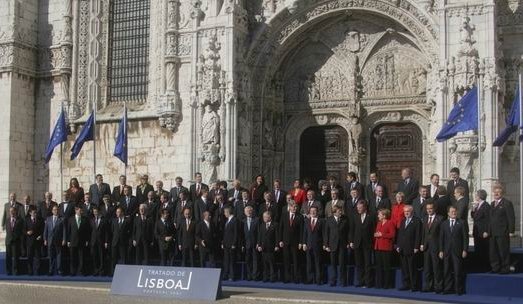 According to Article 15 of the EU Treaty, the European Council gives the EU "the impetus required for its development and defines the general political objectives and priorities for this". In addition, the European Council also deals with important issues for which no consensus could be found at ministerial level (i.e. in the Council of the European Union). The common foreign and security policy (CFSP) is also frequently discussed. The outcome of the Council meetings is recorded in the "Presidency Conclusions". These are initially not legally binding within the political system of the EU. However, since the heads of state and government usually have the authority to set guidelines within the government of their own country, the results of the negotiations at the European Council also serve as a guideline for the meetings of the Council of Ministers. The European Commission also usually acts in line with the compromises found at the summit meetings. Some institutional decisions in EU politics are also taken by the European Council. This includes, for example, the nomination of the President of the Commission and also the High Representative of the EU, through which the European Council has influence on the EU executive. In addition, it elects the members of the Executive Board of the European Central Bank after non-binding votes in the Economic Committee and in the plenum of the European Parliament on the recommendation of the Council of the EU (Article 283 (2) subparagraph 2 TFEU). The election takes place with a qualified majority. The European Council has another function in connection with the passerelle regulation in Article 48 of the EU Treaty: through this it can use the qualified majority or the introduce ordinary legislative procedures. However, the national parliaments each have a right of veto for such passerelle decisions. The European Council plays a special role in reforms of the EU treaty (such as the Treaty of Nice or the Treaty of Lisbon). Under international law, these are international agreements between the individual member states and must therefore be issued by their governments