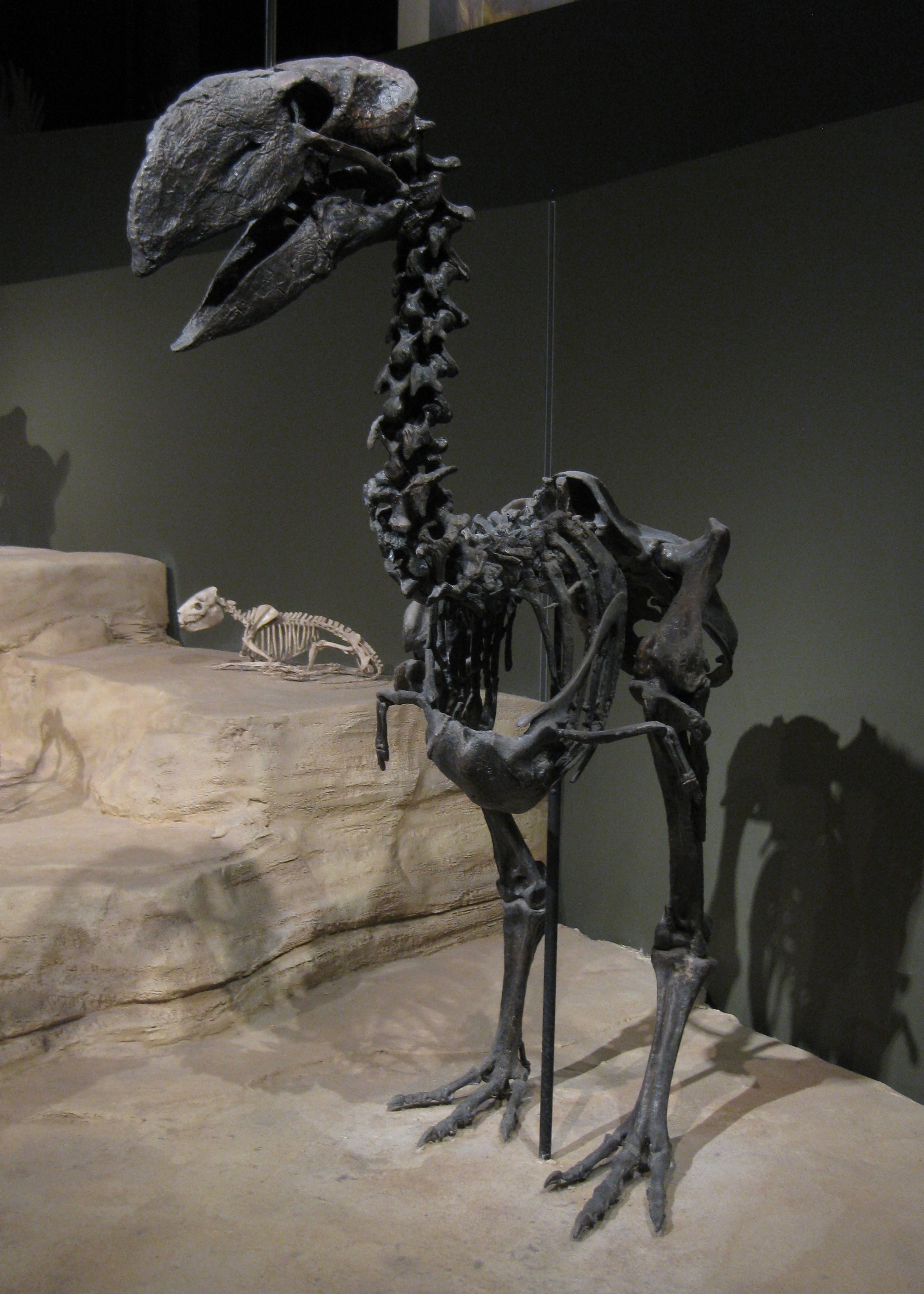 Gastornis is an extinct genus of large, flightless birds closely related to the anseriformes. It was distributed in both present-day Eurasia and North America from the Middle Paleocene to the Middle Eocene 62 to 43 million years ago. The first fossils of the genus Gastornis were discovered near Paris in 1855 and were first described in the same year. The oldest North American finds date back to 1876 and were originally placed in the genus Diatryma. For a long time, both genres were considered independent, which is partly due to an incorrect reconstruction from the end of the 19th century. Only in the early 1990s was it recognized that Diatryma and Gastornis are closely related, new bone finds from France finally led to the synonymization of Diatryma with Gastornis. For a long time, Gastornis was regarded as an agile, carnivorous predator that mainly hunted smaller mammals and, combined with its size, which ranged to just over 2 m, represented a top predator of its time. The view was accompanied by a skeletal structure resembling the South American "terror birds" (Phorusrhacidae), which was worked out on the basis of a nearly complete skeleton find from Wyoming discovered in 1916. In part, however, this similarity was based on incorrect assumptions about the length of individual bones in the foot skeleton. It was not until the 1970s that the image of the agile runner could be corrected by new discoveries of foot bones. According to this, Gastornis represented a rather slow-moving, ground-dwelling bird due to its physique. The diet was unclear for a long time. In addition to the specialization in meat food, a purely plant-based diet was repeatedly discussed, which resulted primarily from anatomical considerations such as the size of the animal and the structure of the beak. For the time being, several independent studies from 2013 confirm the view of specialization in plant food.

Gastornis was a very large and robustly built, flightless bird, reaching a crown height of 1.75 to just over 2 m. On average, European representatives were slightly smaller than North American ones. The body weight for the early forms in Europe was estimated at around 100 kg, for later ones between 135 and 156 kg, sometimes even up to 180 kg. Weight ranges for the average larger North American individuals are from 160 to 229 kg. This made it one of the largest and heaviest known birds. Special features of Gastornis representatives were a large head with a powerful beak, a short but powerful neck and massive legs, the lower parts of which were designed rather short. As in today's large flightless birds, the wings had bones greatly reduced in length.

The skull was very large, measuring 43 cm for a complete specimen, with the powerful beak measuring 23 cm. This was also very high, a total of 16.5 cm, and greatly narrowed at the sides. The top of the beak showed a clearly convex curvature, while the tip of the beak was not extended like a hook. The latter feature in particular distinguishes Gastornis from the similarly built Phorusrhacidae ("terror birds"). The external nostrils were located about 5 cm in front of the orbit and near the bottom edge of the beak. They were small and forward facing. Here, too, there are differences to the phorusrhacids, whose nostrils often attach directly to the eye window. The orbit itself was surrounded by a strong and prominently raised ridge. The square leg, typical of birds, was distinguished by its size, but overall it was rather short and stocky.