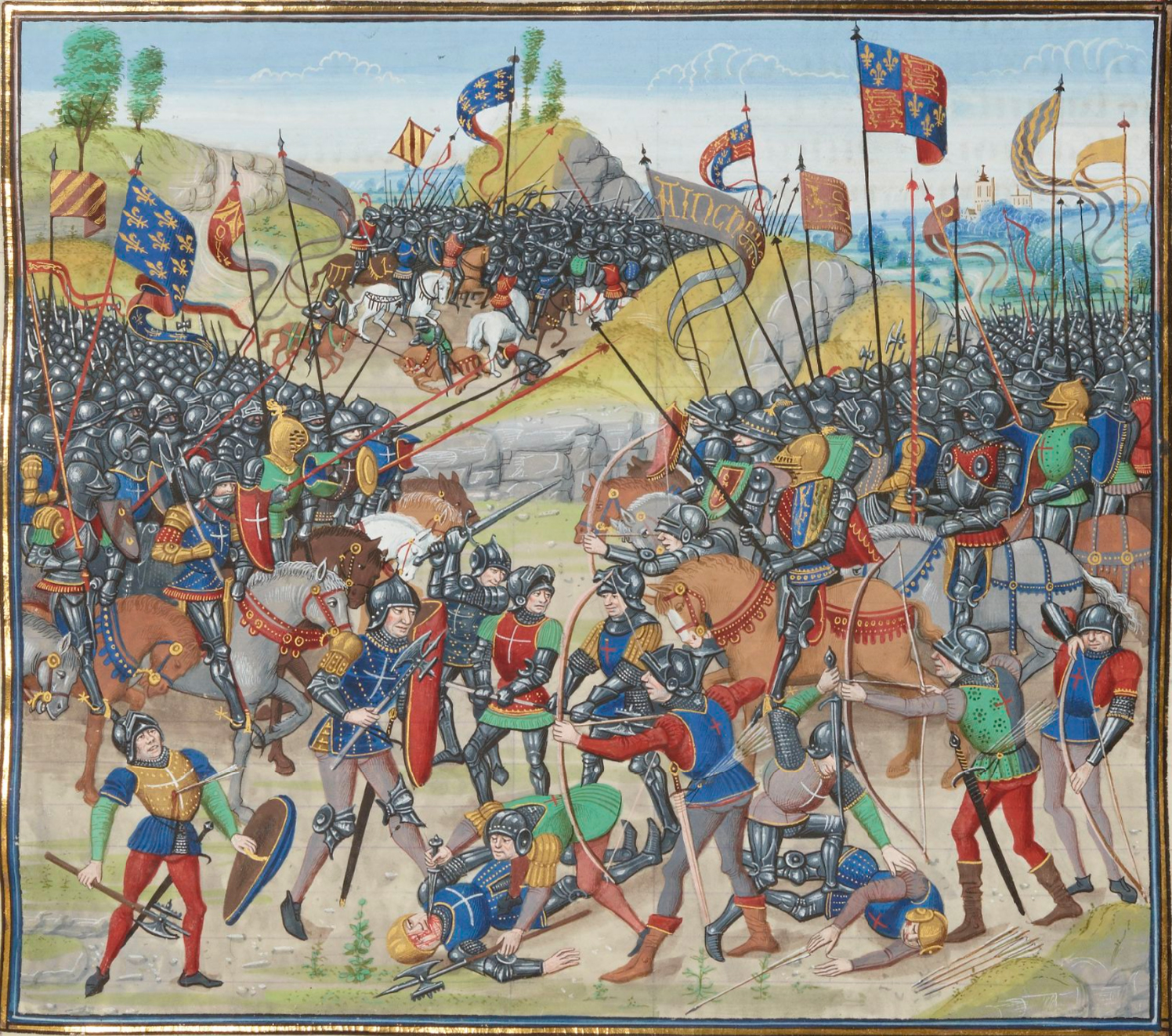 The Hundred Years' War (French La guerre de Cent Ans, English Hundred Years' War) is the period from 1337 to 1453, based on the Anglo-French armed conflict that was dominant at the time and the French Civil War of the Armagnacs and Bourguignons (1410 to 1419). formed the background to the ongoing fighting a feudal dispute over the possessions and role of the English kings as Dukes of Aquitaine in the Kingdom of France, the subsequent dispute over the succession to the throne in France between the English King Edward III. (House of Plantagenet) and the French King Philippe VI. (House of Valois) as well an internal French conflict over power and influence between the Armagnacs and the Bourguignons parties. In the end it was the Valois who emerged victorious from the longstanding dispute. The Hundred Years' War contributed decisively to the final formation of a separate national consciousness among both the French and the English, as well as to a final split of France and England into two separate states. In addition, many technical innovations in warfare were introduced, for example heavy artillery at the Battle of Castillon (1453), which was the first European field battle to be decided with gunpowder.

The term "Hundred Years' War" was introduced by historians in retrospect and traditionally refers to the period from 1337 to 1453 when English kings attempted to enforce their claims to the French throne by force of arms. Nevertheless, this conflict consisted of several phases and individual wars, which were only later seen as a single complex. Even contemporary French chroniclers dated the wars of that time back to the year 1328 and thus indicated the larger context. For example, Eustache Deschamps wrote in a poem around 1389 about the struggles of the time, which lasted from cinquante-deux ans (52 years). In the 16th century, too, a connection between the individual combat operations was recognized. Thus Jacques de Meyer, in his Commentaria sive Annales Rerum Flandicarum, remarked that the war between England and France, with its intervals, lasted for over a hundred years. But only Jean de Montreuil, in his book Histoire de France, published in 1643, explicitly assumed a single war that lasted from 1337 to 1497. He was later followed by British historians such as David Hume in his History of England (1762) and Henry Hallam in his View of the State of Europe During the Middle Ages (1818), although they differed as to the duration of the conflict. In France Professor François Guizot made this approach known from 1828, although the specific term "guerre de cent ans" was a few years older. C. Desmichels used it for the first time in 1823 in his Tableau chronologique de l'Histoire du Moyen Age. The first book to bear this term as a title was published in 1852 by Théodore Bachelet. Shortly thereafter, the historian Henri Martin popularized the term and a comprehensive concept of it in his popular Histoire de France (1855). The term and concept quickly caught on in France. Henri Wallon used it as early as 1864 and later François Guizot himself in his Histoire de France (1873). In English-speaking countries, Edward Freeman campaigned for the French term to be adopted from 1869. John Richard Green followed this advice in his Short History of the English People (1874), and in the years that followed numerous monographs appeared in Britain under this title. The Encyclopædia Britannica first listed him in its 1879 edition