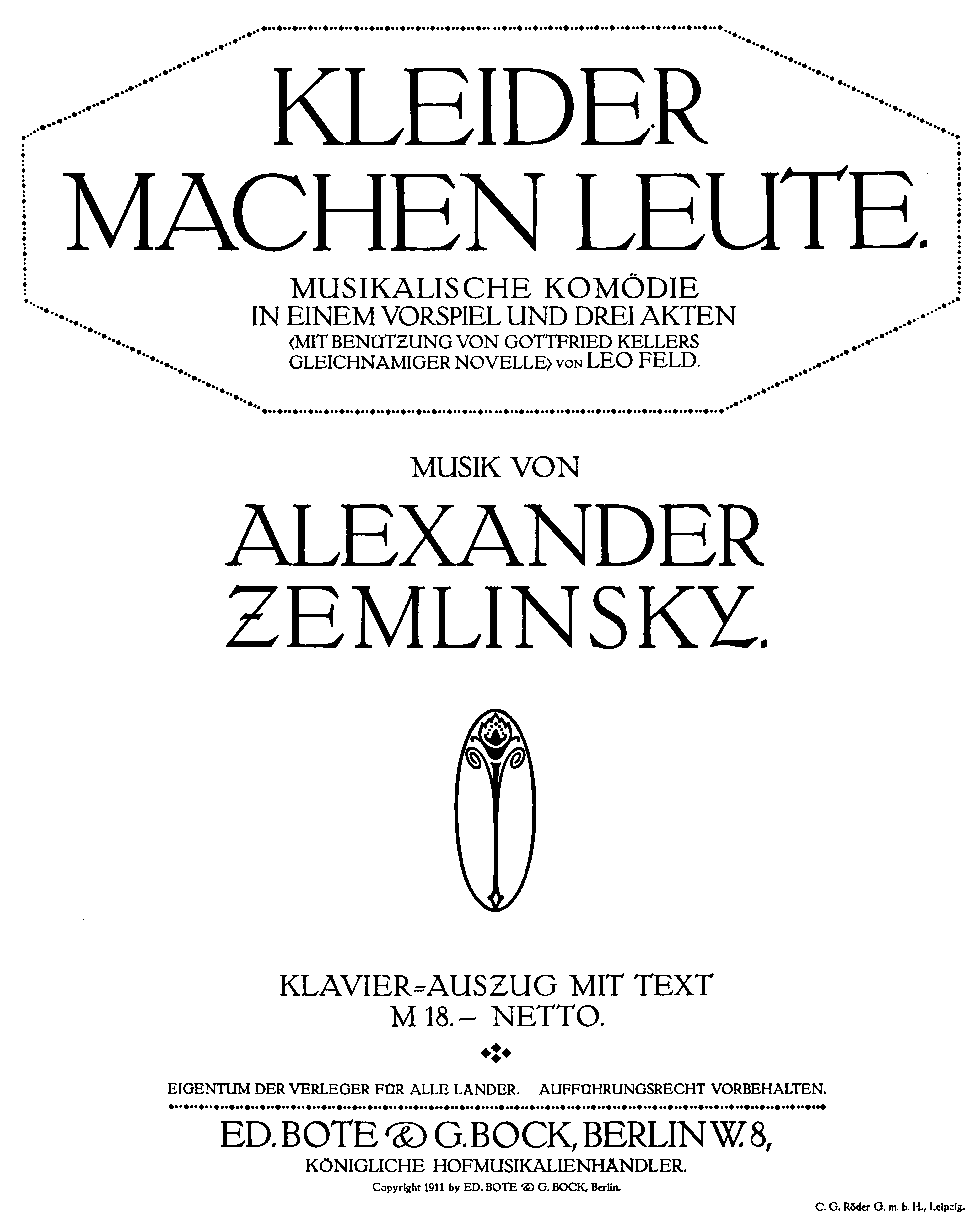 Clothes make the man is an opera (original name: "Musical Comedy") in a prelude and three acts by Alexander von Zemlinsky (music). The libretto by Leo Feld is based on the novel of the same name from the second volume of Gottfried Keller's cycle of novels The People of Seldwyla (1874). The premiere of the first version took place on October 2, 1910 in the Volksoper Vienna. A two-act revision was first played on April 20, 1922 in the New German Theater in Prague.

Action of the version from 1910

On the country road Dissatisfied with his business in Seldwyla, the tailor Wenzel Strapinski has given up his job there to seek his fortune elsewhere. After saying goodbye to his two fellow journeymen at the city limits, he sits in his journeyman's pieces - an elegant travel coat and a sable hat - on a milestone at the side of the road. Fortunately, an empty equipage drives up. The coachman asks him for directions to Goldach and is ready to take him there.

In front of the “Zur Waage” inn in Goldach The authorized signatory Melchior Böhni woos Nettchen, the daughter of the local council. She rejects him because, on the one hand, she repels his self-satisfied manner and, on the other hand, she hopes for a great love with a noblewoman. Her father would not object to a connection between the two, however. Strapinski drives up in the stately coach. In his elegant clothes everyone considers him a nobleman, especially since the coachman calls him "Count Strapinski from Poland" before he continues his journey. Everyone flatters Strapinski and you set the table for your meal. While eating, Strapinski initially rejects the soup, but accepts the champagne. Finally he eats a large pie, hungry. When the village honors - the notary Adam Litumlei, the town clerk Polykarpus Federspiel, the furniture dealer Häberlein and the tile dealer Pütschli-Nievergelt - show up for a game of cards, Strapinski continues his charade and joins them for a cigar. Böhni, Nettchen and their father join them. Strapinski is delighted with the girl's beauty. The jealous Böhni becomes suspicious. He noticed the strapinski fingers pricked by the tailor shop. He decides to inquire about the stranger in Seldwyla. Since the coachman has apparently taken the baggage of strap skis with him on his departure, the others hurry to bring bedding, toothbrushes and other things as replacements. Strapinski thinks about whether he should flee - but he wants to see Nettchen again.

On the good of the district council The district council has invited Strapinski and the dignitaries with their families to his estate. There the men play cards while the women talk about recipes over coffee. Böhni still doubts the identity of the "Count". Strapinski almost gives himself away with his views on clothing in Goldach. Federspiel and Litumlei's daughter Lieselein try to get him to intercede for their marriage. Häberlein and Pütschli-Nievergelt are looking for his support in the upcoming elections. Finally, everyone goes to the dining room to eat. Nettchen performs the Heine song "Lehn’ your Wang ’to my Wang", in which she accompanies herself on the piano. Strapinski goes into the garden because he wants to run away. However, he still wants to say goodbye to Nettchen. The two get closer, and both confess their love. Böhni catches her at