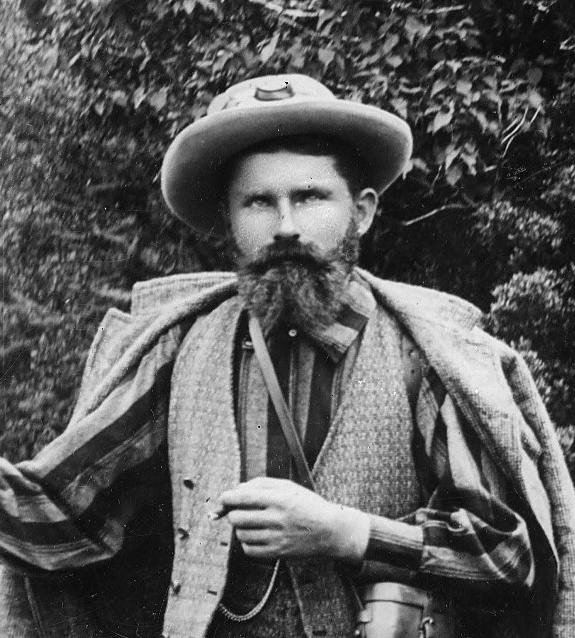 Matthias Zurbriggen (May 15, 1856 in Saas-Fee, † June 21, 1917 in Geneva) was a Swiss mountaineer and mountain guide. Matthias Zurbriggen was born in Saas-Fee, but emigrated to Macugnaga, Italy, with his family as a child. It is said that Matthias Zurbriggen was still so young that he was carried over the Monte Moro Pass in a stretcher on his mother's back. From then on the family lived in the Italian Walser village of Macugnaga. At the age of thirteen he left Macugnaga and worked as a laborer in various countries before returning to his Walser homeland. He acquired his mountaineering skills while building the Marinelli Hut on the east face of Monte Rosa. There he was active as a mountain guide for a longer period of time until he was discovered by William Martin Conway in 1892. Together they explored glaciers and peaks in the Karakorum for a whole year and set the record for that time at 6890 meters on a secondary peak of the Baltoro Kangri. After that, Zurbriggen traveled alone in India and Australia. On January 14, 1897 he made the first ascent of the 6958 m high Aconcagua in the Andes in Argentina as an expedition leader. A short time later he was on the Tupungato with Stuart Vines. Later, Zurbriggen traveled to the Tianshan and undertook another Himalayan expedition in 1902. In 1906 he was back on the Monte Rosa, after which his activities as a mountaineer ended. He fell socially and became a vagrant, on June 21, 1917 he was found hanged in Geneva.