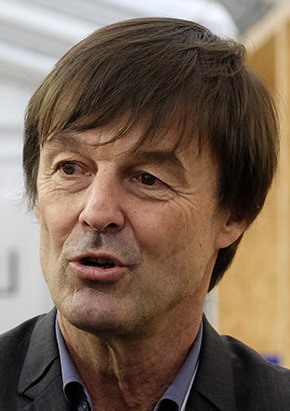 Nicolas Jacques André Hulot (born April 30, 1955 in Lille) is a French television presenter, environmentalist, filmmaker and politician. From 17 May 2017 he was Deputy Prime Minister (Ministre d’État, "Minister of State") and Environment Minister ("Minister for the ecological and solidarity transition") of France. In August 2018 he announced that he would resign from his ministerial office and withdraw from political life.

Career as a journalist and moderator

From 1973 Hulot worked as a photo journalist for the French photo agency Sipa Press. He later worked as a radio journalist and producer for France Inter. From 1987 to 2012 he presented documentary series on the TV channel TF1 with a focus on nature and environmental protection: First Ushuaïa, le magazine de l’Extrême, then briefly Opération Okavango and from 1998 Ushuaïa Nature. Inspired by these series, the TF1 group has broadcast Ushuaïa TV since 2005. In 2009 the documentary Our World (original title: Le Syndrome du Titanic) by Nicolas Hulot and Jean-Albert Lièvre (with Ulrich Wickert as voice actor in the German version) was released.

On May 17, 2017, President Emmanuel Macron appointed Hulot environment minister in the Philippe cabinet. This transitional cabinet resigned (as is customary in France) shortly after the second round of parliamentary elections (June 18, 2017). Hulot also became Environment Minister in the Philippe II cabinet. Hulot called for "realistic and feasible scenarios" for the dismantling of nuclear energy in France. So far there is no clear strategy how a 50 percent share of nuclear power in the energy mix can be achieved. Since the nuclear phase-out act was passed in July 2015, little has been done. Now a plan has to be drawn up for further action. On August 28, 2018, he announced on the French radio station France Inter that he would step down and withdraw from political life. He justified this step with the words: “I no longer like to lie.” The environment and climate change are not a priority for Macron. Literally, Hulot said in the interview: “Je ne veux plus me mentir. [...] Je sais que seul je n’y arriverai pas. [...] J’ai un peu d’influence, je n’ai pas de pouvoir. »(German:" I don't want to lie to myself any longer. (...) I know that I won't achieve anything on my own. [...] I have a little influence, but no power. ") Among other things, he complained about« la présence des lobbys dans les cercles du pouvoir »(German:" the presence of lobbyists in circles of power ").

In 1990 Nicolas Hulot founded the Ushuaïa Foundation. She dedicated herself to environmental education and in particular offered pedagogically processed teaching material for teachers and associations. Since 1995 it has been called the Nicolas Hulot Foundation pour la nature et l’homme (German: Nicolas Hulot Foundation for Nature and Man) and is a member of the IUCN. One example of a campaign run by the foundation is “SOS - Mer Propre” to raise public awareness of marine protection in 1998. Together with the Fondation de Fran