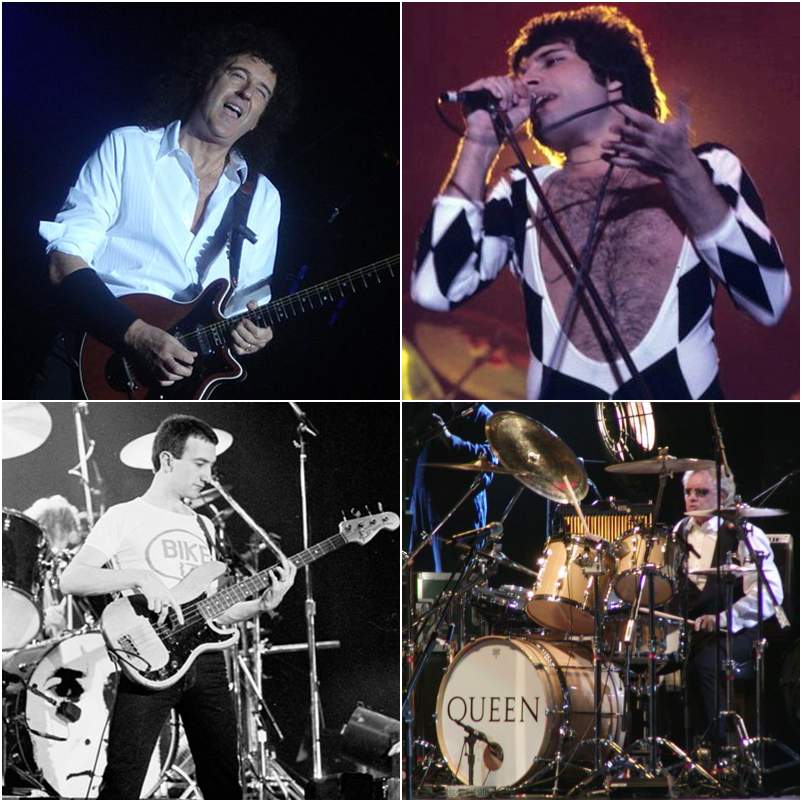 Queen is a British rock band formed in 1970. Her line-up of Freddie Mercury, Brian May, Roger Taylor, and John Deacon remained unchanged for two decades. The group's music is characterized by great stylistic diversity, and all of the band members played a key role in the songwriting. Queen's best-known songs include We Are the Champions, composed by Freddie Mercury, Brian Mays We Will Rock You, John Deacons Another One Bites the Dust and Roger Taylor's Radio Ga Ga. Mercury's Bohemian Rhapsody took many weeks in both 1975 and 1991 long top of the British singles charts. For this title, which combines ballad and operetta-like exaggerated vocal capriols as well as hard rock in one song, the band produced one of the earliest and most style-defining music videos. Queen was consistently successful internationally: all of the studio albums released after her breakthrough in 1974 reached number one in the charts. With around 200 million albums sold, Queen is one of the world's most commercially successful bands. Her first greatest hits album alone sold more than five million copies in her home country Great Britain, which is unmatched there. With more than 31 million copies sold, it is also one of the world's best-selling albums. With sales of over seven million units, Another One Bites the Dust is the band's best-selling single. Queen played more than 700 concerts in 16 years.

In August 1963 Brian May began building his first electric guitar, the “Red Special”, together with his father. She later shaped the typical, unmistakable guitar sound of Queen. In 1966, Tim Staffell and Farrokh Bulsara - who then called himself Freddie Bulsara and from the early 1970s called himself Freddie Mercury - became friends, both of whom were studying at the Ealing College of Art. In 1968 May (guitar, vocals), Staffell (lead vocals, bass) and Roger Taylor (drums, vocals) founded the group Smile. Meanwhile, Mercury joined the Liverpool band Ibex as a singer. He met Smile through his friend Tim Staffell and became a fan of the band. In February 1969, Smile attended a festival at the Royal Albert Hall. They played among other things. the later Queen title See What a Fool I've Been. With producer John Anthony, who later co-produced Queen's debut album, the band recorded the tracks Doin ’Alright, Earth and Step on Me at Trident Studios. The single with the latter two titles was released in August on Mercury Records in the USA. The label made further recordings possible at De Lane Lea Studios in London. This is where, among other things, the piece Blag anticipating May's later Brighton rock guitar solo.

While May was in Tenerife for a few months to study, Staffell left the band Smile and went to Colin Petersen's Humpy Bong. Then May, Taylor and Freddie Mercury formed a band called Queen. With Mike Grose on bass, this formation gave their live debut in Truro on June 27, 1970, due to the fact that they were already advertised under the name Smile. On July 18, the band performed live as Queen for the first time at a concert at Imperial College London. Great successor Barry Mitchell made a few appearances as the bassist of Smile from August, but separated from the group again at the beginning of the next year. This was followed by a brief guest appearance by Doug Bogie until February 1971. After a long search for a bassist, John Deacon finally completed the Queen's line-up, which did not change for 20 years until Mercury's death. In the same year, the group recorded the first demo recordings with five tracks at De Lane Lea Studios, which later appeared on their first album. In February 1973 she took her first BBC session for John