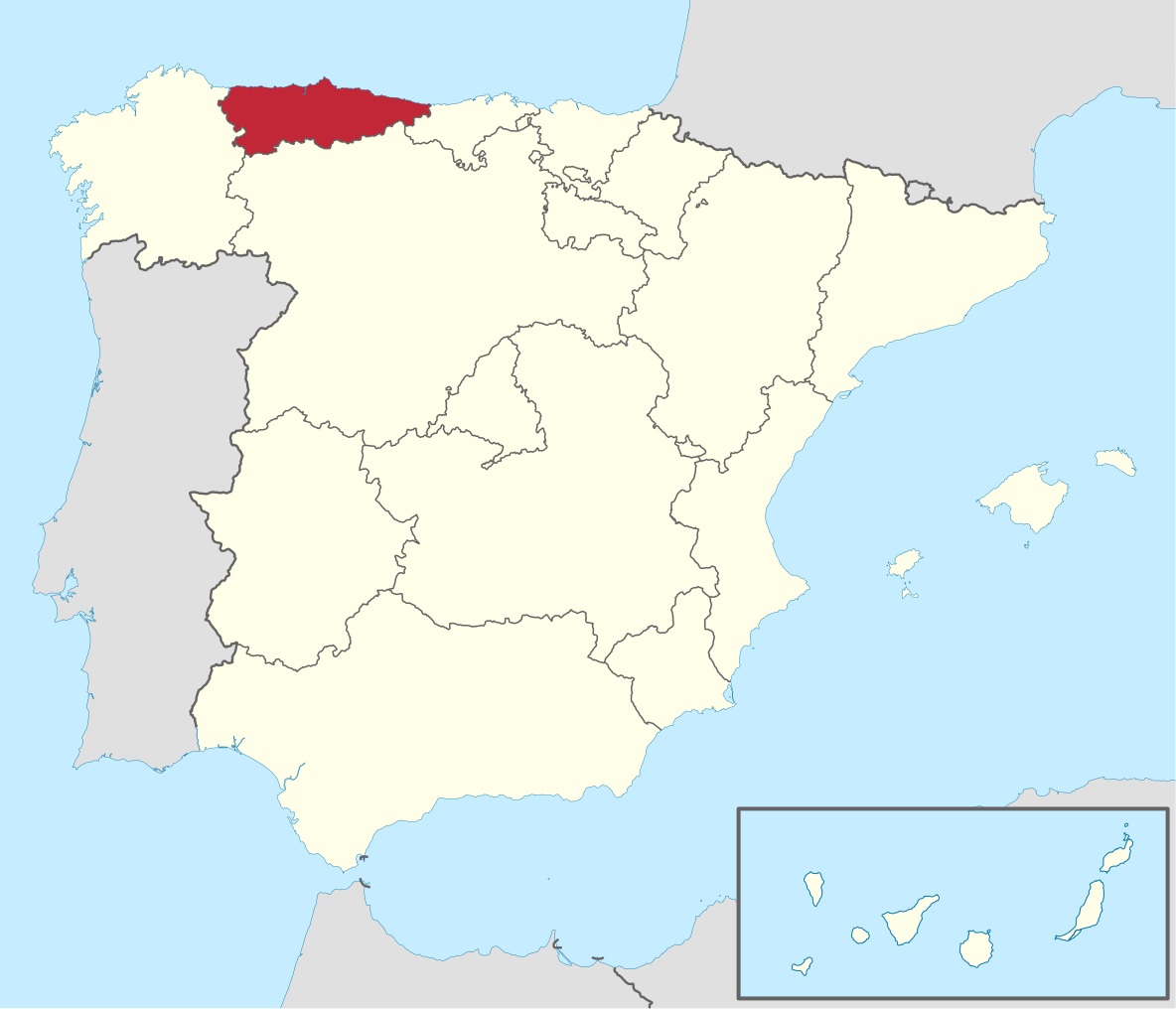 The Principality of Asturias (in Asturian, Principáu d'Asturies; in Eonaviego, Principao d'Asturias) is a uniprovincial autonomous community of Spain, with a population of 1,028,244 inhabitants (INE 2018).[6] Bathed to the north by the waters of the Cantabrian Sea, it limits to the west with the province of Lugo (Galicia), to the south with the province of León (Castilla y León) and to the east with Cantabria. It receives the name of Principality for historical reasons, as the heir to the crown of Castile and, by extension, to the crown of Spain, holds the noble title of Prince of Asturias, established by Juan I of Castile in the year 1388. Oviedo is, according to the statute of autonomy, seat of the institutions of the Principality of Asturias; the most populated city in the community is Gijón. The current Asturian territorial space coincides basically with the old territory of the Asturias de Oviedo, contiguous to the Asturias de Santillana. With the territorial division of Javier de Burgos in 1833, the region of Asturias de Oviedo became the province of Oviedo, receiving a portion of the territory of Asturias de Santillana —the councils of Peñamellera Alta, Peñamellera Baja and Ribadedeva—, while the rest of them were integrated into the province of Santander, later the autonomous community of Cantabria. The Principality of Asturias according to its Statute of Autonomy is considered as a historical community in its article 1. It has a legislative assembly called the General Board of the Principality, in memory of an old medieval institution of representation of the councils before the Crown.[7] In addition, its territory coincides in part with the nuclear zone of the ancient kingdom of Asturias in the year 718 and it has two languages ​​of its own: Asturian or Bable, from the Asturian-Leonese linguistic stock, which, although not considered an official language, has a legal status similar to that of officiality and Eonaviego or Galician-Asturian, from the Galician-Portuguese linguistic trunk, spoken in the councils of the western end and which enjoys a similar status.

The term "Asturias" receives the name of its ancient settlers, the Astures, primitive inhabitants of the banks of the Astura River (Esla). The name of Astures included not only those from the Meseta (cismontanos), but also those from the north (transmontanos). "Astura" must have taken the root from Celtic; stour, which means "river". This toponym appears in Brittany, where Pliny speaks of the river Stur; today there are three Stour rivers in Kent, Suffolk and Dorset. At the mouth of the Elbe there is another river Stör, formerly called Sturia. Likewise, in Piedmont the Celtic tribe of the Esturi and a Stura river were located. The same root survives even today in Gaelic and Breton in the words ster and stour meaning 'river'.

Asturias is located on the northern coast of Spain. It limits to the west with the province of Lugo (Galicia), to the east with Cantabria, to the south with the province of León and to the north with the Cantabrian Sea. Its territory is 10,603.57 km² and has a population that slightly exceeds one million inhabitants. It is the most mountainous Spanish autonomous community[8] and one of the most mountainous regions in Europe, with 35% of the terrain with slopes greater than 50% and 65% with slopes greater than 30%.[9] in the so-called Green Spain. The geographical extremes of Asturias are the following:

The territory occupied by the autonomous community of Pri