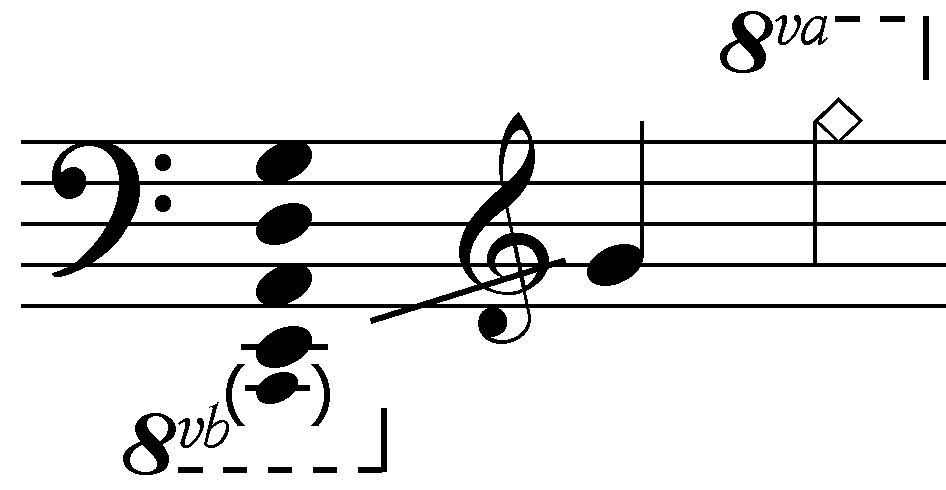 The electric bass, simply called bass,[1] is a melodic musical instrument of the chordophone family, similar in appearance and construction to the electric guitar but with a larger body, a longer neck and scale and, usually four strings tuned to the standard tuning of the double bass, its predecessor.[2][3]​ It arose from the need to produce the deep rhythmic sounds with an instrument that was more compact, cheaper, easier to produce and transport than the double bass, which was the instrument in charge of this task in the 1940s and 1950s. quite similar to that of the guitar, although this later caused some people to confuse these two instruments. In order to avoid excessive use of additional lines on the staff, the electric bass, like the double bass, sounds one octave lower than the notes represented in musical notation. Like the electric guitar, the electric bass needs to be plugged into an amplifier to make its sound more audible. Since the 1950s, the electric bass has progressively replaced the double bass in popular music as the rhythm section instrument dealing with bass lines.[4] Although these vary considerably depending on the style of music, the bassist fulfills a similar function regardless of the style in question: to establish the harmonic framework and mark the time or "rhythmic pulse".[5] The electric bass is used as a backing instrument or as a solo instrument in virtually every style of popular music in the world, including The blues, the flamenco, the Jazz, the funk, the pop, the punk, reggae and rock.[6] The musician who plays the electric bass is called a bassist.

In the 1930s, American inventor and guitarist Paul Tutmarc developed the first solid-body electric bass in history, an instrument very similar to modern basses, which had been designed to be held and played horizontally.[7] In 1935 , the sales catalog of Tutmarc's company, Audiovox, featured his "electronic bass-violin", a solid-body instrument with a 30.5-inch neck that had frets.[8] The change in shape, making it closer to a guitar, made the instrument easier to transport, and the addition of frets eliminated the tuning problems of the double bass, making the electric bass much easier to play than the latter. However, Tutmarc's invention was not very successful commercially, so his idea was not taken up again until the early 1950s, with the arrival of Leo Fender (1909-1991) and his Precision Bass.[9]

In the early 1950s, engineer and inventor Leo Fender (1909-1991), who at the time was in the radio repair business,[10] developed with the help of his employee George Fullerton the first electric bass produced. in history series.[11] His "Precision Bass", introduced in 1951 became the industry standard and would be endlessly copied. The original "Precision Bass" (or P-bass) had an angled (slab or 'table') body similar to that of the Telecaster guitar and a single single-coil pickup, but in 1957 its design was modified to present a body rounded contour with a four-pole double pickup. This split pickup (divided) was made up of two parts similar to the mandolin pickups that Fender included in its catalog at the time.[12] Monk Montgomery was the first known bassist to use the new instrument on his tour with jazz vibraphonist Lionel Hampton.[13] Other pioneer bassists in the use of the new instrument were Roy Jo