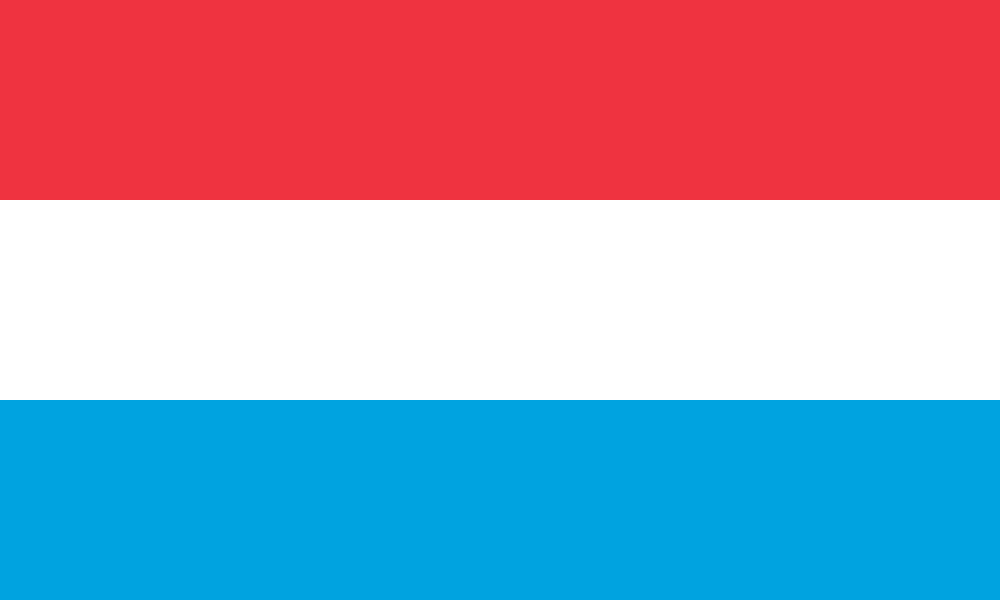 The flag of Luxembourg is made up of three horizontal stripes of the same size, red, white and light blue. Similar to that of the Netherlands and Paraguay, but they differ in that the Dutch and Paraguayan insignia have a blue lower stripe, and the latter also has different shields on the front and back. The first documented insignia linked to the Duchy of Luxembourg dates back to 1123 and was burelada, that is, divided into small horizontal bands of the same size, probably with the colors yellow and red. The current version, like most contemporary tricolor flags, has a design that has been inspired (at least in part) by the flag of revolutionary France. It seems likely that the Luxembourgers accepted, when making their flag (which began to be used between 1845 and 1848), the colors of the Dutch flag, because they are also the ones that appear on the arms of their dukes. The Luxembourgish flag, as well as the coat of arms, did not receive legal protection until 1972. The red color corresponds to the Pantone 032C standard; the blue color to the Pantone 299C standard.

The resemblance of the Luxembourgish flag to the Dutch flag has led to a national debate to change it. On October 5, 2006, parliamentarian Michel Wolter introduced a legislative proposal to replace the current red-white-blue national flag with the red lion insignia.[1] He argued that the current flag was commonly confused with that of the Countries Netherlands and that, on the other hand, the red lion was more popular, more aesthetic and of greater historical value for Luxembourg. Wolter also claimed that he had personally discussed the matter with some three hundred people, most of whom expressed support for his initiative. On the other hand, many national politicians (including leading members of Wolter's own CSV) and VIPs have expressed astonishment in the local media about the timing and necessity of such a change. Wolter was supported on his initiative by the center-right Alternative Democratic Reform Party.

coat of arms of luxembourg