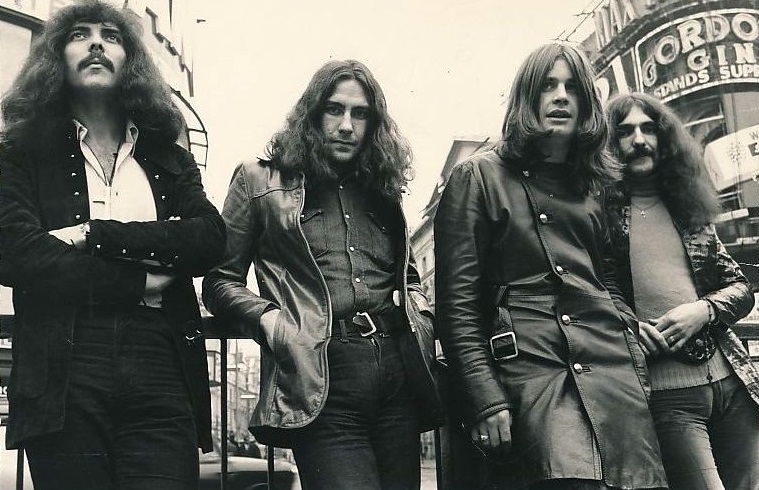 Black Sabbath was a British heavy metal and hard rock band formed in 1968[11] in Birmingham by Tony Iommi (guitar), Ozzy Osbourne (vocals), Geezer Butler (bass) and Bill Ward (drums). Influenced by the music of Blue Cheer, Cream or Vanilla Fudge,[12][13] the group incorporated lyrics about the occult and terror with more seriously tuned guitars from the beginning and achieved several gold and platinum records in the decade. from 1970. They are the pioneers of heavy metal along with other contemporary groups such as Deep Purple,[14] Budgie,[15] Pentagram,[9] Sir Lord Baltimore[16] and Led Zeppelin. As one of the earliest and most influential heavy metal bands of all time,[17] Black Sabbath helped develop the genre with such releases as Paranoid, an album that achieved four RIAA platinum certifications.[18] They have sold more than 75 million records worldwide, including 15 million copies in the United States alone.[19] Ozzy Osbourne was fired from the band in 1979 to be replaced by Ronnie James Dio, a former Rainbow vocalist who recorded the albums Heaven and Hell and Mob Rules, before leaving the group in 1982. Later, the group would become integrated for the 1980s and 1990s by vocalists such as Ian Gillan, Glenn Hughes, Ray Gillen or Tony Martin and various bassists and drummers such as Vinny Appice, Neil Murray, Bev Bevan, Cozy Powell or Bobby Rondinelli. In 1992 Dio returned to the band, producing his third album as a vocalist: Dehumanizer. The original lineup reunited in 1997 and released a live album, Reunion, the song "Iron Man" won a Grammy Award in 2000, thirty years after its original release on Paranoid, and years later the group with its original lineup was included. on the list of the 100 greatest artists of all time, ranking 85th.[20] They were inducted into the Rock and Roll Hall of Fame in 2006. The lineup that recorded Mob Rules—consisting of Iommi, Butler, Dio and Appice—reunited in 2006 under the name Heaven and Hell.[21] On November 11, 2011, the founding members of the band announced that they were reuniting again and that they were going to record a new album.[22] The communication between Ozzy and Iommi was reactivated, after years, from the trip of the second to Los Angeles on the occasion of the death of Ronnie James Dio in May 2010. They played as headliners at Download Festival on June 10, 2012, with plans for a world tour to follow.[23] However, soon after Ward announced that he would not participate in the Black Sabbath reunion unless they clarified contract issues. The following day, the rest of the band announced that they had no choice but to continue without him, but that they are leaving the doors open for a possible return.[24] In 2013, Iommi, Osbourne and Butler released the album 13, whose single "God Is Dead?" won a Grammy Award.

Following the breakup of the band Mythology in 1967, guitarist Tony Iommi and drummer Bill Ward began recruiting to form a blues rock band in Aston, Birmingham. The group was joined by bassist Geezer Butler and singer Ozzy Osbourne, who had played together in a band called Rare Breed. In 1968, the new group, which also included guitarist Jimmy Phillips and saxophonist Alan "Aker" Clarke, was called The Polka Tulk Blues Company, named after an Indian textile company. After shortening the name to Polka Tulk, the band changed it to Earth and continued as a quartet without Phillips and Clarke.[25][26] Earth played covers of Jimi Hendrix, Cream, and Blue Cheer in clubs in England, Denmark, and Germany, as well as long blues jams. In December 1968, Iommi abruptly left Earth to replace